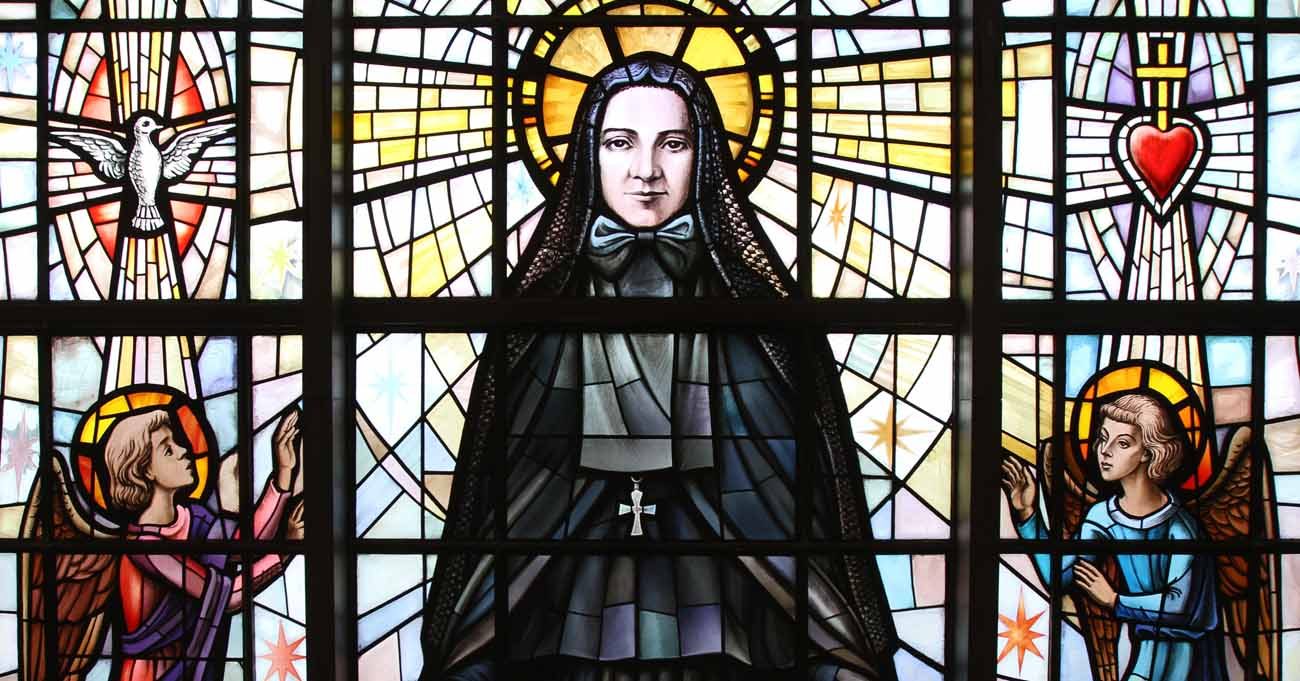 St. Frances Xavier Cabrini is depicted in a stained-glass window at the saint's shrine chapel in the Washington Heights section of New York City. (CNS photo/Gregory A. Shemitz)

VATICAN CITY (CNS) — Although she died 100 years ago, St. Frances Cabrini is a shining example of “love and intelligence” in ministering to the needs of immigrants and helping them become integral members of their new homelands, Pope Francis said.

Responding to “the great migrations underway today” the same way Mother Cabrini did “will enrich all and generate union and dialogue, not separation and hostility,” Pope Francis said in a letter to Sister Barbara Louise Staley, superior of the Missionaries of the Sacred Heart of Jesus, which the saint founded.

Mother Cabrini arrived in New York in 1889 to work with Italian immigrants, setting up orphanages, schools and hospitals in nine U.S. cities. Naturalized as a U.S. citizen in 1909, she died in Chicago Dec. 22, 1917.

The Missionaries of the Sacred Heart of Jesus were holding their general assembly Sept. 17-23 at the National Shrine of St. Frances Xavier Cabrini in Chicago.

In her work, particularly among Italian immigrants to the United States, Mother Cabrini “focused attention on situations of greatest poverty and fragility, such as the needs of orphans and miners,” the pope wrote in his letter, which was released at the Vatican Sept. 19.

Mother Cabrini also demonstrated “a lucid cultural sensitivity” by making sure she was in constant contact with local authorities, the pope said.

“She undertook to conserve and revive in the immigrants the Christian tradition they knew in their country of origin, a religiosity which was sometimes superficial and often imbued with authentic popular mysticism,” he wrote. “At the same time, she offered ways to fully integrate with the culture of the new countries so that the Missionary Mothers accompanied the Italian immigrants in becoming fully Italian and fully American.”

With dialogue and help integrating, he said, “the human and Christian vitality of the immigrants thus became a gift to the churches and to the peoples who welcomed them.”

While Mother Cabrini and the sisters had a specific mission to assist the immigrants and strengthen their faith, he said, Catholics today cannot forget “that is the vocation of every Christian and of every community of the disciples of Jesus.”

On a more personal note, Pope Francis told the sisters, “I assure you of my remembrance and prayers with deep affection, both because I have always known the figure of Mother Cabrini and because of the special concern I devote to the cause of immigrants.”

NEXT: Church leaders condemn possible massacre of indigenous in Amazon