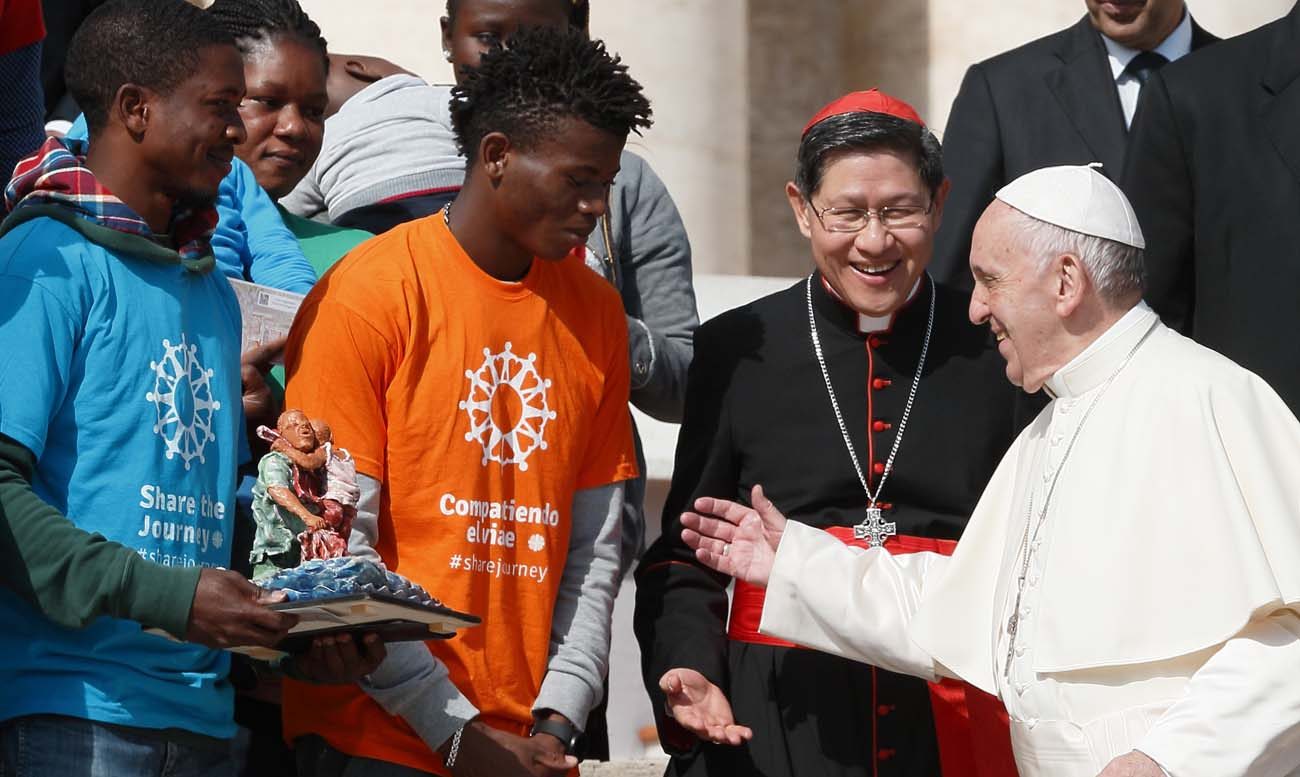 Pope Francis greets Cardinal Luis Antonio Tagle of Manila, Philippines, and immigrants during his general audience in St. Peter's Square at the Vatican Sept. 27. Immigrants were in attendance as Caritas Internationalis launched its "Share the Journey" campaign in support of immigrants. (CNS photo/Paul Haring)

VATICAN CITY (CNS) — While encouraging Catholics to reach out to migrants and refugees, the Vatican is reaching out to governments as they struggle to work out international policies and principles for dealing with the large number of people fleeing violence and poverty.

The involvement of the church and church agencies in the U.N. process for drafting the Global Compact on Safe, Orderly and Regular Migration and the Global Compact on Refugees goes hand in hand with the much more personalized effort to encourage individual Catholics to meet a migrant or refugee and listen to that person’s story.

Pope Francis launched Caritas Internationalis’ “Share the Journey” campaign Sept. 27, inviting all Catholics to extend a hand of welcome to a migrant or refugee.

The pope himself oversees the Migrants and Refugees Section of the Vatican Dicastery for Promoting Integral Human Development, and he has approved specific “action points” or concrete proposals the Vatican wants to see incorporated into the global compacts.

The 20 points, drafted in consultation with several bishops’ conferences and Catholic organizations working with refugees and migrants, are explained in separate notes. One, addressed to bishops and other pastoral leaders, aims to educate Catholics and build public support for policies to guarantee an appropriate welcome, protection, promotion and integration of migrants and refugees. The other is addressed more specifically to politicians and those involved in drafting the compacts.

In his message for World Day of Migrants and Refugees 2018, a text released in August, Pope Francis mentioned several of the action points, including pleas to expand the pathways and processes for legal migration; to end the practice of putting unaccompanied minors in jail-like detention centers; and to halt “collective and arbitrary expulsions of migrants and refugees.”

Scalabrini Father Fabio Baggio, undersecretary for migrants and refugees, said the action points “respond to the need for concreteness” in applying principles that, in many ways, already are enshrined in international law on human rights, human dignity, migration and the rights of refugees.

The specific suggestions, he said, are based on the “best practices” seen in many countries, particularly for protecting the most vulnerable migrants and refugees, such as unaccompanied minors.

The Vatican position recognizes “the right of every state to manage and control its borders,” but it also insists nations live up to the obligations they accepted when becoming parties to international agreements on human rights, the protection of refugees and the rights of children.

The very specific suggestions include items like having countries “with significant labor migrant outflows” set up a system to provide potential migrants with information about their rights and obligations; working to develop a system to evaluate and recognize university and professional degrees earned in another country; and increasing development aid to poor countries hosting large numbers of refugees.

Lobbying and education go hand in hand for the Vatican, Father Baggio said, because “correct information is essential in this process,” especially to counteract a series of false claims and presumptions about migrants that feed people’s fears and move them away from the Christian obligations to welcome the stranger and help those in danger.

Msgr. Robert J. Vitillo, a U.S. priest who is secretary general of the International Catholic Migration Commission, gave one example of where accurate information is needed.

“There is fear among some governments and local populations that refugees and migrants bring infectious diseases into host countries,” he told Catholic News Service.

But “scientific epidemiological studies have demonstrated that this is not the case,” he said. “There have been recent outbreaks of measles in Europe, for example, but public health experts maintain that these outbreaks are due to the fact that many Europeans have decided that their children should not be vaccinated against measles, while most refugees and migrants are vaccinated upon arrival in the host countries.”

Asked what “Catholics in the pew” can or should do, Msgr. Vitillo said he hoped they would understand “the Gospel mandate to treat all with the same love and mercy that we ourselves receive from our heavenly Father” and, therefore, would “avoid all hateful or exclusionary treatment of refugees and migrants.”

“I hope that ‘Catholic in the pews’ will develop an acute awareness of the blessings and gifts — cultural, social, and spiritual — that refugees and migrants bring to their host communities, just as many of our own ancestors were welcomed by host communities in the distant, and not-so-distant, past,” he said.

And, finally, he said, “I hope that ‘Catholics in the pews’ will pray and act to effect peace in the world and to promote integral human development, so migration could become a choice, freely taken in orderly and regular fashion, with the promise of decent work with just pay and decent work conditions, rather than to be violently forced on people for their own survival or that of their families.”

NEXT: Young Kenyans excited to help bishops prepare for 2018 synod