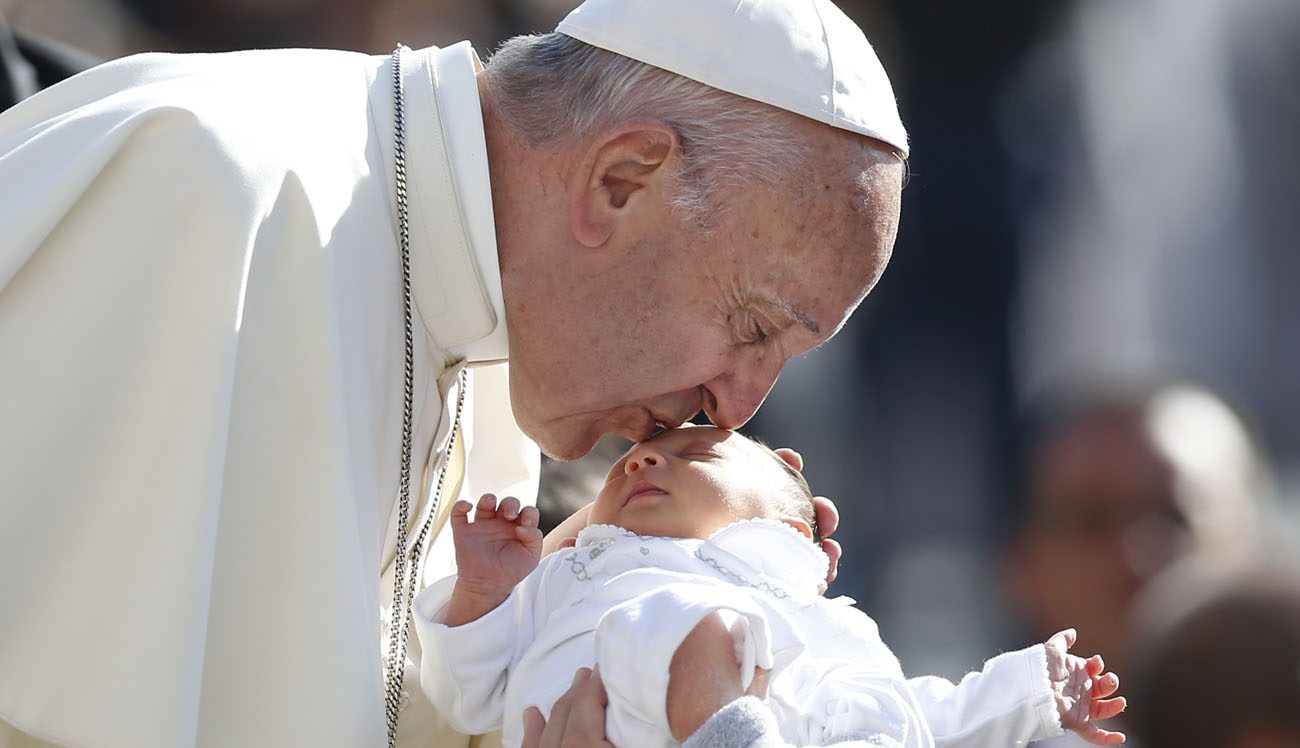 Pope Francis kisses a baby during his general audience in St. Peter's Square at the Vatican Sept. 27, 2017. (CNS photo/Paul Haring)

VATICAN CITY (CNS) — The same hope that moves people to seek a better life for themselves and their loved ones also moves the hearts of men and women to welcome migrants and refugees with open arms, Pope Francis said.

“Those who come to our land and we who go toward their heart to understand them, to understand their culture and language” embark on a shared journey that “without hope cannot be done,” the pope said Sept. 27 at his weekly general audience.

During the audience, Pope Francis launched the “Share the Journey” campaign, an initiative sponsored by Caritas Internationalis, the global network of Catholic charitable agencies.

The campaign encourages Catholics to understand, get to know and welcome refugees and migrants.

Continuing his series of audience talks on Christian hope, the pope reflected on the enemies of hope who, like the Greek myth of Pandora’s box, “unleash so many misfortunes throughout the world’s history.”

However, he said, few people remember that at the end of the story, the final item unleashed from the box is hope, which is what “sustains life, protects it, cares for it and makes it grow.”

“If humankind had not cultivated hope, if they had not been sustained by this virtue, they would have remained in the caves and would not leave their mark in world history,” the pope said. Hope “is the most divine thing that exists in the human heart.”

While the poor tend to be “the bearers of hope,” he said, there are others, especially young men and women, who may have the “misfortune” of having everything, but who are not taught the “virtue of waiting and patience.”

“They are destined to the worst punishment: that of not desiring anything,” he said. “To close the door to desires, to dreams — they look young, but instead autumn has already fallen in their hearts. They are the youths of autumn.”

This emptiness of the soul, he added, is an obstacle to hope and leads Christians to fall into the temptation that ancient monks would call “the midday devil.”

“This temptation surprises us when we least expect it: the days become dull and boring,” and nothing seems worthy of one’s fatigue, he said. “This attitude is called sloth; it erodes life from within until it becomes an empty shell.”

Pope Francis urged Christians to keep hope alive and fight against desperation through Jesus “who can open wide the doors” and “look beyond the horizon.

“If Jesus conquered the world, he is able to conquer within us all that stands in the way of goodness,” the pope said. “If God is with us, no one can rob us of the virtue we absolutely need to live. No one will rob us of hope.”