Deacons and their wives share field notes on parish ministry 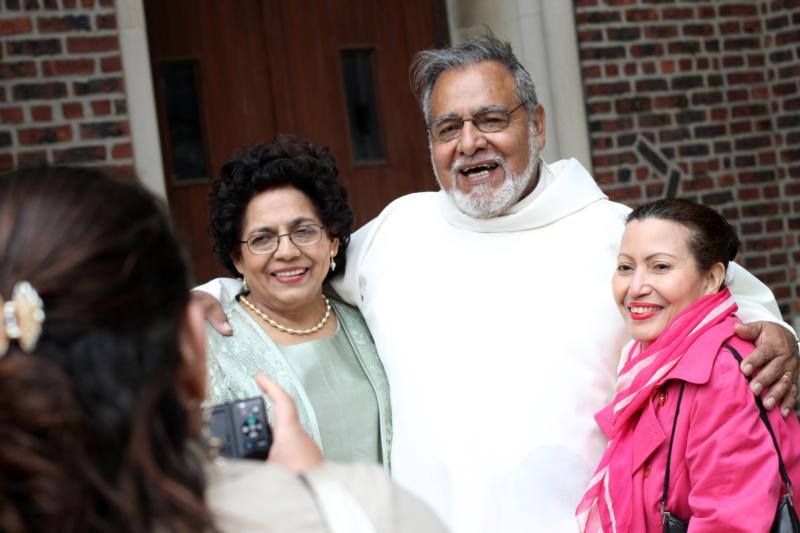 Deacon Ruben Mendez poses for a photo with his wife Consuelo, left, and their friend Olga Liriano following his May 25, 2014, ordination to the permanent diaconate at Our Lady of Angels Church in Brooklyn, N.Y. Couples are frequently asked for advice about what it takes to combine the mission of the diaconate while coping with the strain it sometimes adds to marriages and family relations. (CNS photo/Gregory A. Shemitz)

“You have to get used to the idea that you sit alone in church,” Natera says. “That was very difficult for me. Sometimes it’s a little lonely in the pew when he isn’t beside me.”

Her husband, Ruben, is a permanent deacon in the Diocese of Tyler, Texas, currently assigned to Prince of Peace Parish in Whitehouse.

Shawn Tiemeier, whose husband, David, has been a permanent deacon at St. Joseph Catholic Church in Libertyville, Illinois, for 11 years, has a similar story: “One time David was not on the altar and the priest asked why. David said, ‘Because I’m here with my family.’ The priest said, ‘All the more reason you should be on the altar!'”

With much experience between them, both couples are frequently asked for advice about what it takes to combine the mission of the diaconate while coping with the strain it sometimes adds to marriages and family relations.

It helps if the spouse is involved in a ministry of her own, they say.

Natera, who plays the guitar, helps get youth choirs established in the diocese. “We kind of started by ourselves working together years ago. As soon as we registered at a new parish, I got involved in the music ministry right away.”

Tiemeier is a co-director of St. Joseph’s Women at the Well prison ministry at Logan Correctional Center, the only maximum-security prison for women in Illinois. She and her husband went through the four-year diaconate training program together, which isn’t something everyone has the time for, she knows, but she recommends it.

“For me, the diaconate program helps a lot in my understanding of what it means to be a Catholic. Our relationship became much richer.” But, she acknowledges, “definitely, it was a sacrifice we made in terms of the time we had to give to our children.”

But she found that being a deacon’s spouse also has helped her find a leadership role in her parish, when “things could get patriarchal. There weren’t a lot of women doing anything.” Now, “you’re the deacon’s wife, so it’s more acceptable.”

Deacon Natera, retired as an engineer in the U.S. Forest Service, now teaches Latin as an adjunct professor at the University of Dallas, in addition to instructing candidates for the diaconate. He’s also been director of Hispanic ministries for the diocese.

He has three standard pieces of advice:

First, “Your wife is the queen of the house.” Between marriage and orders, “your first sacrament was marriage, and she is at the top of the list.”

Second, “If you don’t have prayer in your life, you won’t be a good deacon.”

Third, “Do not cause scandal in the church. Gossiping about clergy — anything negative — that doesn’t help anything.”

Deacon David Tiemeier found one unexpected hurdle to be “you have a much more public life. You pay a little more attention to how you’re behaving. You’re seen as somebody who’s an expert. You have to be aware of what the church teaches and what the pastor prefers to do in a certain situation.”

But there are unexpected bonuses as well. “Once a month, I do baptisms. I really enjoy how families come together for those. It really warms my heart.”

NEXT: Four things everyone can do to build a culture of vocations