Four things everyone can do to build a culture of vocations 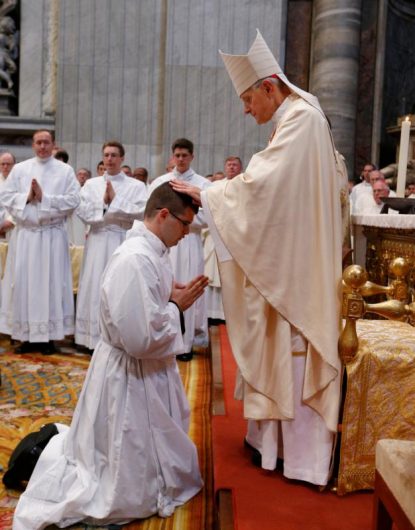 Cardinal Donald W. Wuerl of Washington ordains then-Pontifical North American College seminarian Geoffrey A. Brooke Jr. from the Diocese of Jefferson City, Mo., as a deacon during a Mass in St. Peter’s Basilica at the Vatican Oct. 2, 2014. Now, as an ordained priest, Father Brooke reflects on his long journey in discerning his vocation. (CNS photo/Paul Haring)

“You know you’ll never get married or have kids?” More often than not, that was the response I got when telling someone I was studying to be a Catholic priest. It was usually followed with, “You’re gonna be very lonely and miserable.”

Yet, when someone says they are going off to medical school, the response is usually, “How wonderful!” or “Isn’t that great!” Not, “How will you deal with people dying?” or, “Good luck ever seeing your family again while you’re working all those long hours to pay off mounds of debt.”

What does that contrast say about us as a church? How does that help us build up a culture of vocations and help young people to hear their call?

Society already makes it hard enough for a young person to hear their call today; shouldn’t we as a church be doing all we can to make it easier? It wasn’t always easy for me, but eventually I heard God’s voice and by his grace was ordained a priest in 2015.

Only one of my parents is Catholic, and I went to public school my entire life until I entered seminary. Growing up I played every sport you can imagine. Like every other kid in America, I dreamed of “going pro.”

Unlike most kids in America, I had my share of health problems when I was very young. On a few occasions, the doctors seemingly ran out of options. Yet miraculously, I recovered. I was able to play high school sports, but I knew I would never be one of the lucky few who actually become professional athletes.

Instead I set my heart on becoming a sports journalist. I loved talking, and I loved sports, so why not bring the two together? When I was still in high school I began writing for my local town paper.

At the same time that I was writing and playing football in high school, I also got involved in my parish youth group. While participating in weeklong service immersion trips, I encountered Christ in the face of the poor. These encounters forced me to wrestle with my faith, the nature of God, the church, and to make sense out of my past struggles. In these experiences, the first seeds of a vocation were planted.

When I first started thinking about the priesthood I wanted nothing to do with it all. I decided to make a deal with God. Instead of the priesthood or sports journalism, I would meet him in the middle: religion journalism.

As I threw myself into religion journalism, I began a journey that led me to Washington to work with Catholic News Service at only 19 years old.

Eventually I had to wrestle with a deeper question: Was I having this so-called “success” in journalism at a young age because that’s what God was calling me to do? Or was it because I was afraid of the priesthood, running in another direction? When I came to the realization that it was more of the latter than the former, I decided to stop running; I entered the seminary.

I had to learn that a vocation is a call, not something I could bargain about with God and decide on my own terms. He was calling, I just had to listen better.

This begs the question, What might we do as a church to help young people hear their call better?

— Schools: Why is it that in nearly every Catholic school in America the first thing you see is the trophy case? What if instead the first thing you saw was a wall with the photos of the alumni who are priests and religious? The ugly truth is that there would be many sparse or empty walls, but maybe that’s the kind of wake-up call we need.

— Families: Is Mass the only time you and your kids see a priest? Do you ever invite him to come over to your house for dinner? Or to the kids’ ball games? The more priests are a part of your lives, the more comfortable you will all be in living your faith and, for the young ones, hearing God’s call.

Pro tip: Don’t just say, “Father, we’d love to have you over some time!” Rather, ask, “Father, can you come over next Tuesday at 6:00?” The former is a can that keeps getting kicked down the curb until the priest is reassigned; the latter leads to a concrete response, or at least, rescheduling.

— Discerners: For young people wrestling with a potential call to the priesthood or religious life: Go to daily Mass, as much as you can. Eucharistic adoration and confession are important, too. Start with daily Mass, rearrange your work or class schedule if you must. Make it a priority in your life. Now.

— Priests and Religious: To my brother priests and fellow religious. A young woman who is discerning recently approached me and simply said, “Father, thanks for being real with us.” It was a good reminder there was no need to put on a facade or to try and be “cool” or someone I’m not. Young people have a deep desire for and can sense that authenticity.

Father Brooke is a priest of the Diocese of Jefferson City, Missouri.

NEXT: My vocation story starts with prayer at home