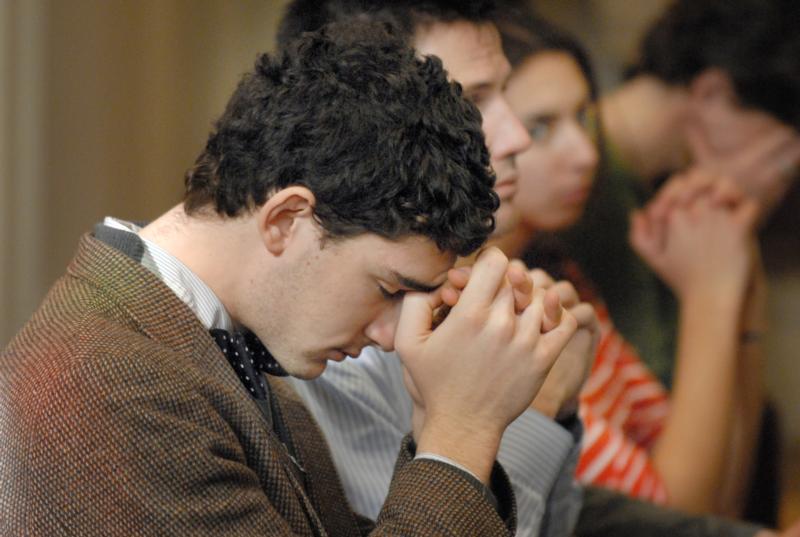 A young man prays during a 2010 novena at The Catholic University of America in Washington. Like a midafternoon snack that keeps us going until dinner, spiritual devotions can nourish and support our faith journey. (CNS photo/Rafael Crisostomo, El Pregonero)

Weekly Mass offers a wonderful way to strengthen our spiritual lives by sharing the Eucharist with our Catholic brothers and sisters. The challenge is sustaining that liturgical experience throughout the week in our daily lives.

Like a midafternoon snack that keeps us going until dinner, spiritual devotions can nourish and support our faith journey. Whether it’s a novena, a rosary or praying to a favorite saint, these devotions can help us deepen our prayer life.

They don’t replace our time at Mass. Rather, they give us an opportunity to find Christ in our midst. Life may be messy, but there is always a path that helps us to see God.

For Sister Susanne Bunn, combining the rosary with her physical therapy exercises has given her a chance to connect her real-world experiences with her faith.

“It takes about 10 seconds to pray a Hail Mary. Most of my exercises call for 10 repetitions,” said Sister Bunn, a Mission Helper of the Sacred Heart for more than 50 years. “The therapy passes much more quickly when accompanied by the rosary.”

“I was a young sister and did not want to scandalize her,” said Sister Bunn, of Edgewood, Maryland.

On the first mystery, her companion asked Sister Bunn for whom she wanted to pray. “My sister-in-law Barb was pregnant. Sister Annette mentioned all women who were considering abortions. We went back and forth naming intentions,” Sister Bunn said. “The time flew by as we prayed.”

Spiritual devotions have a way of helping our minds cut through the clutter and find what truly matters — God’s plan.

Kathleen Kelly of Ormond Beach, Florida, spends half an hour at eucharistic adoration most Friday mornings after Mass. Doing so helps her center her thoughts as she takes the Eucharist to the sick and homebound who can’t get to Mass.

“What it has given me is a knowledge and belief that whatever I do, I must do for God,” Kelly said. “This is my faith.”

We turn to prayer in times of need, but sometimes we may feel unworthy to bring our worries directly to God. He welcomes all intentions, but Patti Christopher of Wilmington, Delaware, said she feels better taking those concerns to the saints with the hopes they will intercede on her behalf. She feels a particular kinship with St. Anne, the mother of Mary, and says a novena prior to her feast day on July 26.

Praying to the saints makes Christopher feel like she has an advocate who understands her needs and pleads on her behalf. Many years ago, when her infant son faced a critical night in the hospital after a life-saving surgery, she attached a green scapular — also known as the Badge of the Immaculate Heart of Mary — to his crib.

“The next morning they could not believe how great he was doing. Two days later, after he came out of intensive care, it dawned on me we left the green scapular on the crib. I went back to tell them it was left on there,” said Christopher, a retired nurse. “They told me this little girl had been in there with a bad outlook and the next morning she sat up in bed. They said, ‘Can we keep this?’ I said, ‘Absolutely.'”

Over the years, she has used other devotions, including a relic of St. John Neumann, to physically involve her faith in a loved one’s health battles. “Every time they say, ‘I don’t know what happened,'” Christopher said. “I know how it happened. We prayed and prayed.”

PREVIOUS: A devotional life will not leave us as it found us

NEXT: Devotions and popular piety bring faith into everyday life