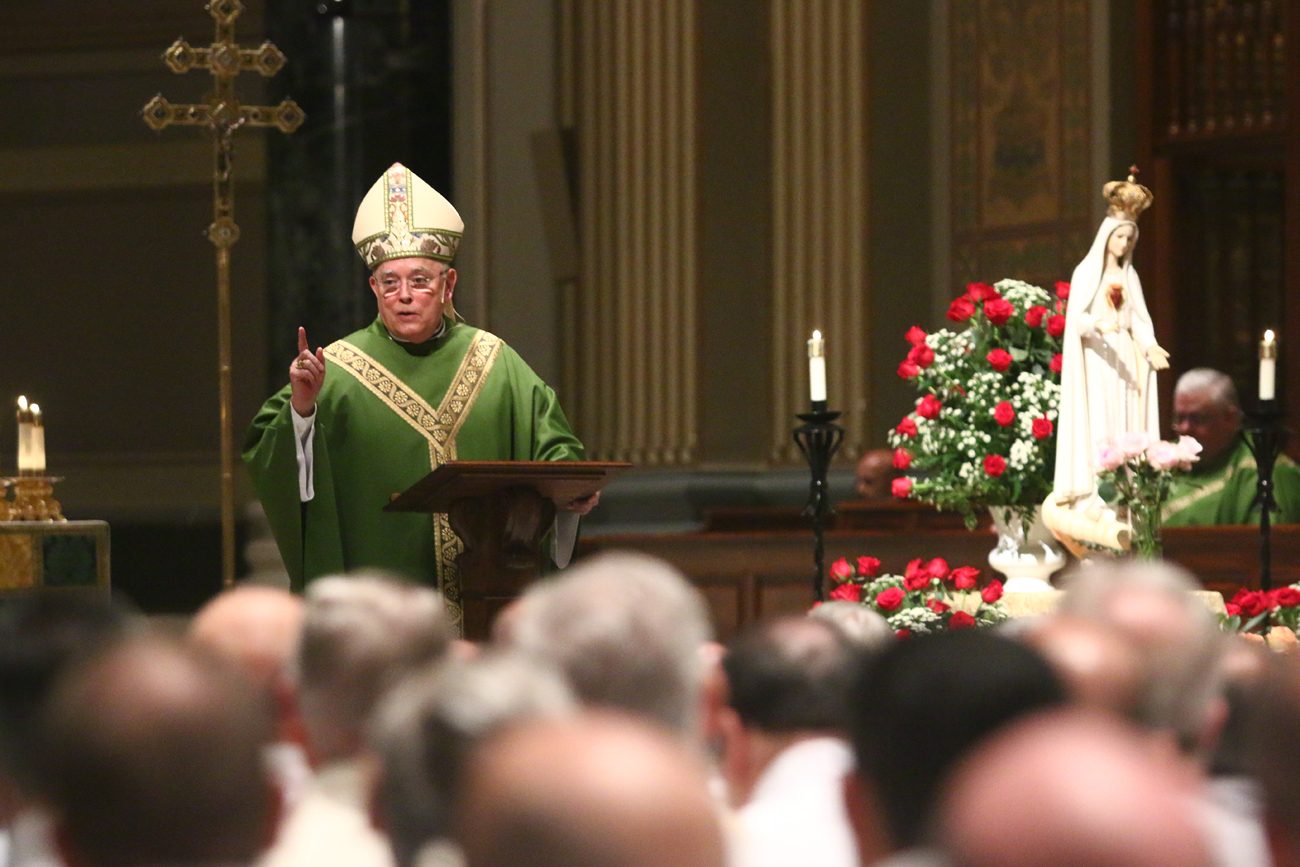 Archbishop Charles Chaput preaches the homily at the Mass celebrating the consecration of the Archdiocese of Philadelphia to Our Lady of Fatima on the 100th anniversary of Mary's apparitions to three shepherd children in Portugal, and the 50th anniversary of the restoration of the permanent diaconate on Sunday, Oct. 15 at the Cathedral Basilica of SS. Peter and Paul, Philadelphia (Photo by Sarah Webb)

Folding chairs had to be set up for the oversized crowd at the 11 a.m. Mass on Sunday, Oct. 15 at the Cathedral Basilica of SS. Peter and Paul because it was a double header – a celebration of the 50th anniversary of the restoration of the permanent diaconate by Pope Paul VI in 1967 and consecration of the archdiocese to Our Lady Fatima to mark the 100th anniversary of her appearance to three children in Portugal in 1917.

(See a photo gallery with scenes from the Mass here.)

In attendance were permanent deacons and their wives and families along with devotees of the Blessed Virgin, especially members of the “blue army,” the Legion of Mary.

Archbishop Charles Chaput, who celebrated the Mass, covered both occasions nicely in his homily.

“You have presented yourself as a sign, as a servant of Jesus through your diaconate,” the archbishop told the deacons. “I am grateful to you and your spouses, your children and your parents for their sacrifice for the sake of the people of God.”

Addressing the place of Mary in salvation history, Archbishop Chaput said, “To be the mother of our Savior is indeed an extraordinary grace. For God to choose Mary of Nazareth for this role would indicate very clearly she was an extraordinary person. Those of us who are Catholic believe she was indeed without sin from the moment of her conception until her natural death.”

Deacon James DiFerdinand of St. Mary Magdalen Parish, Media, is marking his 10th anniversary as a permanent deacon. “It’s a big ministry and varied,” he said. “I assist at Mass, I preach, I proclaim the word of God, do baptisms and many things.”

His wife, Ro, is very much a part of it. “I have gotten a lot of knowledge through this,” she said. “I help in the office, I assist with the baptisms. There is not a better feeling in the world.”

Many of the deacons in attendance were veterans of many years under varied pastors. For instance Deacon Bob Brady, who was at the ceremony with his wife Chris, has been a deacon for 27 years, now at Our Lady of Guadalupe in Buckingham, and he still loves the work. “It is not hard,” he said. “I do RCIA, weddings and baptisms. I preach every week and do whatever comes my way.”

Many of those who came for the consecration to Our Lady of Fatima lingered afterward for a little prayer before her statue.

Thelma Clarke was one of a dozen or so members of the Legion of Mary group from Our Lady of Charity Parish, Brookhaven. “The Blessed Mother is an integral part of our faith,” she said. “She brought our Redeemer into the world.”

Rose Ramos Muldoon came in from St. John Baptist Vianney Parish in Gladwyne along with members of the Legion of Mary and her children. As her name suggests, her family is of mixed heritage – Irish and Puerto Rican.

“Mary represents the church and our family,” she said. “She is a symbol of how to deal with faith and problems. She suffered and sacrificed for her son.”

On this day Muldoon was praying for all people including those in Puerto Rico.

Surely Mary, the spiritual mother of us all, was listening.

PREVIOUS: Catholic parents turn heartache of addiction into hope for others

NEXT: Parishioners celebrate growth in West Chester, 50 years on