Catholic parents turn heartache of addiction into hope for others

This is the sixth part in a CatholicPhilly.com series, “The Opioid Epidemic: A Catholic Perspective,” on the drug crisis in communities served by the Archdiocese of Philadelphia. Read part one, part two, part three, part four and part five of the series. Listen to our podcasts on spirituality and recovery, on Mother of Mercy House, on a theologian’s view of the issue, on Our House Ministries and on a Catholic parent’s response.

The opioid addiction crisis continues to claim thousands of lives across the United States, yet federal help to fight the epidemic may be on the way if a proposed law comes to pass.

Shapiro noted in a statement that “more than 64,000 Americans died from drug overdoses in 2016,” with more than 4,600 of those deaths occurring in Pennsylvania.

Those numbers do not include the additional thousands, young and old, who wrestle with ongoing addiction. Nor do the metrics represent the family members who live with the pain of substance abuse, often without any resources to assist them in their own struggle.

In the Philadelphia area two parents, both with children who have battled addiction, are turning their heartache into hope for others. Through their ministries they show how the Catholic faith can help to heal substance abuse.

Nina Marie Corona was pursuing a degree in Catholic theology when her youngest daughter became addicted to drugs. Now a certified recovery specialist and doctoral candidate in ministry at Fordham University, Corona began researching addiction from a spiritual perspective, hoping to better understand her daughter’s plight. 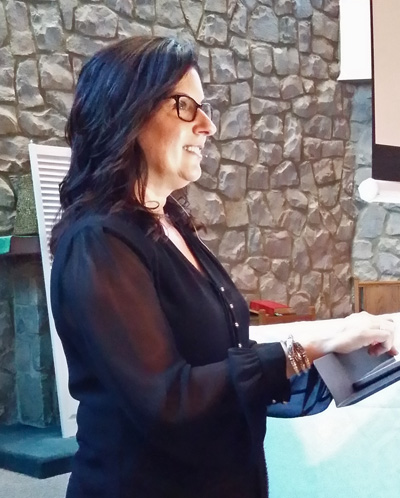 Nina Corona, a certified recovery specialist and doctoral candidate in ministry at Fordham University, developed a four-part reflection on the addiction epidemic from a Christian perspective, for use in Catholic parishes. (Gina Christian)

Corona’s thesis project eventually developed into “We Thirst: Lessons in Mercy,” a four-part reflection on the addiction epidemic from a Christian perspective. Each session focuses on a particular aspect of addiction, including the biological, psychological, sociological and spiritual factors of the disease.

Corona has presented the “We Thirst” retreat at a number of area parishes, including St. Eugene in Primos and St. Thomas of Villanova in Rosemont. She will next offer the program at Cranaleith Spiritual Center, with weekly sessions on Wednesday evenings from Oct. 11 to Nov. 8.

“Addiction is a battle against everything we hold dear,” Corona said during her retreat at St. Eugene’s last July. “I just really feel that this is where the church is needed.”

“Fear motivates a lot of people, but faith is more important,” Whetstone said. “I can’t wait to talk to my clients about this.”

(Listen to a CatholicPhilly.com podcast for this story.) 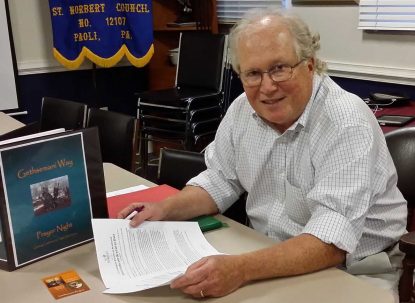 Mark Christmyer of St. Norbert Parish in Paoli developed Gethsemani Way Ministry for Addictions in the absence of a Catholic recovery program.

Like Corona, Mark Christmyer knows firsthand the pain of parenting an addicted child — and he is equally passionate about the Catholic faith’s power to transform even the most broken lives.

“Addiction is pure evil,” he said. “From a parent’s perspective, it’s your worst nightmare, and it decimates families.”

After discovering his son’s addiction, Christmyer — the communications director at St. Norbert Parish in Paoli — immediately sought out a faith-based treatment program.

Finding a Catholic recovery option, however, proved to be difficult. After calling four priests, three deacons, two youth group ministers, a Catholic high school counselor and a Catholic services organization, Christmyer and his wife were still left without a solution.

At a friend’s recommendation, they finally enrolled their son in Teen Challenge, a Christian recovery program founded in 1958 by Pentecostal preacher David Wilkerson, author of “The Cross and the Switchblade.”

Although their son achieved sobriety, the Christmyers found that the experience had impacted the Catholic beliefs with which he’d been raised.

“As we were driving him home, he had a number of questions,” Christmyer recalled. “’Why do Catholics worship Mary? What’s this about the Pope?’ And that’s what made me think we need to have a Catholic program.”

With the approval of St. Norbert’s pastor, Norbertine Father Michael J. Lee, Christmyer founded Gethsemani Way Ministry for Addictions. Now in its third year, the initiative — which addresses addictions of all kinds — features a monthly prayer gathering on the third Thursday of the month at 7 p.m. Also a faith sharing group, which is open to all who are in 12-step programs, meets on the second Sunday of the month at 7:30 p.m.

The ministry will also host a retreat entitled “From Defiance to Reliance” on Dec. 1 and 2 at Malvern Retreat House.

Named after the garden in which Christ suffered before his crucifixion, Gethsemani Way attracts up to 25 people per month from throughout the area. Although the specific addictions vary, the attendees share a common pain and a desire for healing.

“It’s hard to break our meetings up,” said Marty K., who runs the 12-step gathering. “They talk openly about the real spiritual longing for some kind of solution. It’s very powerful.”

In their ministries, both Corona and Christmyer work to remove the stigma that silences those struggling with addiction.

“We’ve been hiding in shame, alone in the darkness,” Corona said. “And that’s where Satan thrives; he loves the darkness. Well, I say, ‘Get behind me, Satan.’”

Christmyer’s decision to reveal his son’s addiction allowed other parents to open up about their own anguish.

“It came up in one of the Bible studies that I was facilitating,” Christmyer said. “I just admitted, ‘Well, I have a prodigal son.’ The next day, three people called me, and one said, ‘Our son is in the same situation. And we just never talk about it.’”

Through their education and awareness efforts, Corona and Christmyer hope to dispel misconceptions about addiction while pointing toward the deep healing offered through a sacramental relationship with Christ.

“Pope Francis has described the church as a field hospital,” said Christmyer. “That’s what we are and what we need to be doing.”

Given its scope, the addiction crisis offers a vital opportunity for clergy and laity to partner with one another.

“Father Mike Lee, our pastor, has created a spiritual triage and growth center here,” said Marty K. “It’s a place where we recognize that we are all broken, and we come for healing.” 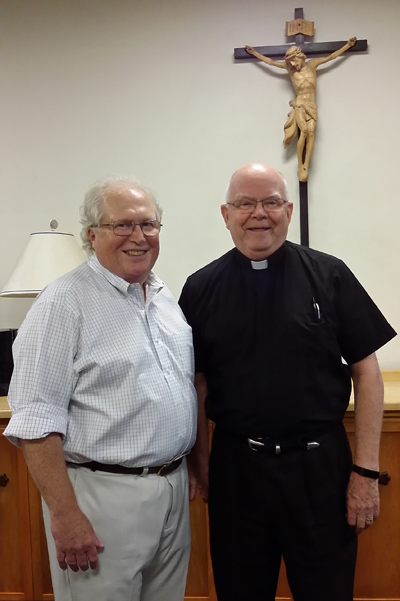 “It was sorely needed,” he said. “People like Mark and Marty are fired up about this.”

Corona believes that the laity have a clear obligation to shoulder the burden for healing addiction.

Corona offers her services in support of pastoral efforts, and her “We Thirst” program has been approved for continuing education credit by the National Association of Catholic Chaplains, among other organizations.

Christmyer has provided Gethsemani Way’s meeting materials to other parishes as a model for forming similar ministries.

“We are the body of Christ,” he said. “If we’re not going to do anything about it, who is?”

PREVIOUS: Sisters needed new wheels, so donors stepped up for a van

NEXT: Dual celebration marks 50 years for deacons, consecration to Mary