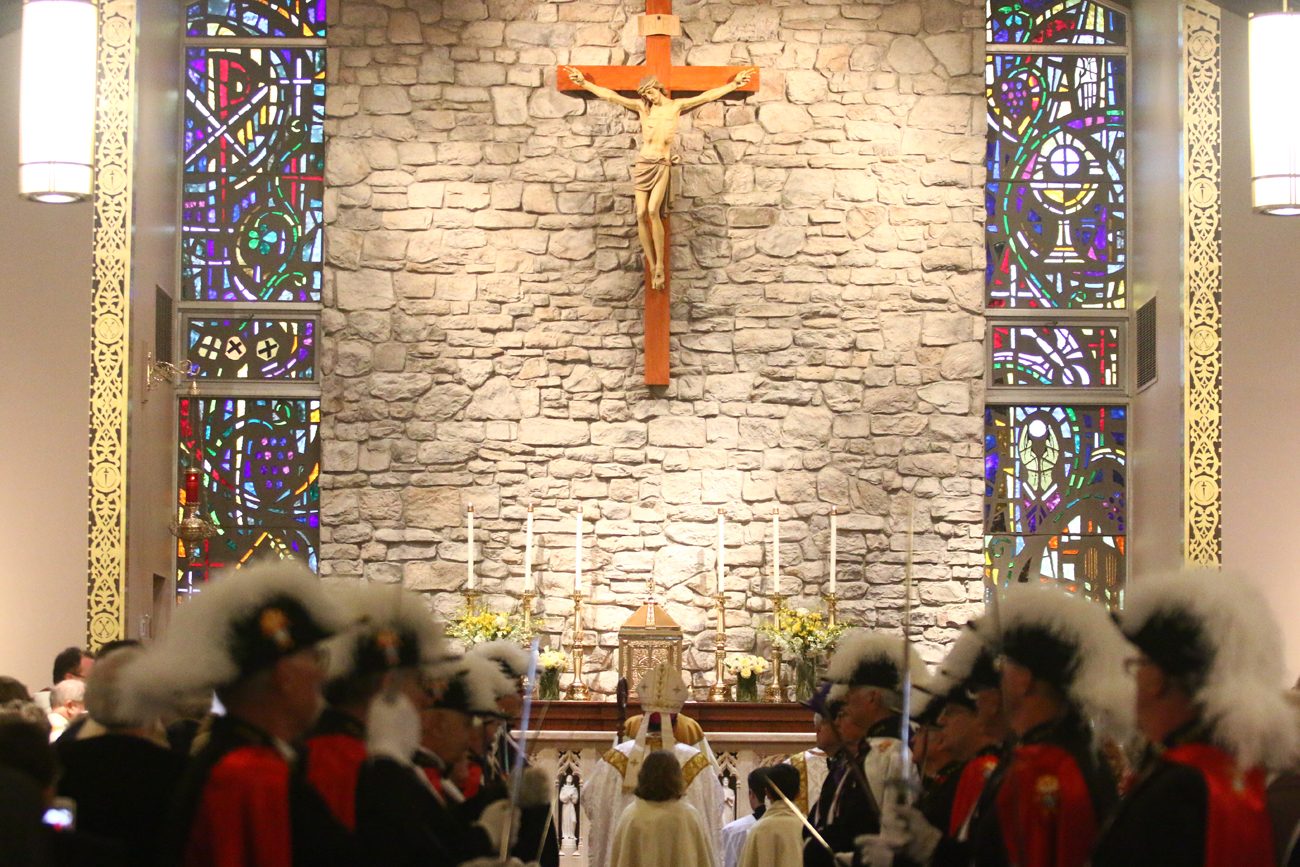 Knights of Columbus form an honor guard as the entrance procession with Bishop John McIntyre approaches the altar at the start of the 50th anniversary Mass Oct. 15 at SS. Peter and Paul Parish, West Chester. (Photo by Sarah Webb)

The closing for the 50th anniversary of SS. Peter and Paul was marked fittingly with a Mass celebrated by Bishop John McIntyre on Sunday, Oct. 15 at the church located at 1325 Boot Road in West Chester.

(See scenes from the Mass in our photo gallery.)

Fifty years ago Father Michael Bednar, the parish’s founding pastor, celebrated his first parish Masses at Immaculata College and Villa Maria House of Studies, at a time when the congregation numbered about 400 families.

Jack O’Brien and his wife, Pat, are among the founding members of SS. Peter and Paul. There are not many of them left, because a number of parishioners were transferred into the area by corporations and later transferred elsewhere, he explained.

O’Brien well remembers daily Masses celebrated in a garage with simple chairs, not pews, and no kneelers.

“We’ve had wonderful, great priests, every one of them,” he said.

But a parish is not only priests, and O’Brien especially remembers Dominican Sister M. Bernardine Buckley, the coordinator of religious studies at the parish for many years.

Also there were David and Kathleen Leitch, who came as a young married couple and were the faithful sexton and housekeeper that kept the church and rectory on an even keel for decades.

Groundbreaking for the church on a 15-acre tract, formerly part of the Sullivan estate, was on Dec. 8, 1968, and the first Mass was celebrated the following Thanksgiving Day. More buildings were to follow quickly.

A very important addition came in 2001 while Father, later Msgr.  James Foley was pastor. At a time when many parochial schools were closing he opened a parish school at SS. Peter and Paul with Nancy Heim as the first principal. After her unexpected death the following June she was succeed by Margaret Egan, who remains principal to this day.

“It’s a beautiful school and we are very blessed,” the principal said. “We opened a pre-K this year. We have 3 year olds and 4 year olds; it’s full-time school, not day care. We pride ourselves in (academic) excellence and faith. Being in Chester County you have to have excellence because the public schools are pretty good and there are also good private schools.”

Among the innovative programs at the school is an internal TV studio with daily broadcasts and excellent outdoor fields for recreation. In the works are new facilities for enhanced programs.

At this time the school has a respectable 383 students with two classrooms for each grade and great support from the families with a number of grandparents volunteering.

An important innovation under Msgr. Foley was an imaginative Poor Box Program. Virtually every parish has poor boxes but they are usually an afterthought. Parishioners may drop in a dollar or small change from time to time and presume it is going to a worthwhile cause.

As instituted by Msgr. Foley, specific charities were chosen and speakers were brought in to explain why they were worthy of support. The consequence was many, many thousands of dollars were collected annually for great causes.

According to figures from last year’s October count and other data, SS. Peter and Paul had 1,406 people attending Mass on an average weekend in 2016. There were 63 baptisms, well in excess of funerals, which is important for future school enrollment.

Father Angelo Citino, who is now pastor, estimates he has 2,000 families in the parish, and in his view the distinguishing feature of SS. Peter and Paul is “the strong faith and generosity of the people.”

He has reinstituted the poor box program that flourished under Msgr. Foley. Each year a committee decides which causes will be assisted. Over the years the poor boxes have yielded over a million dollars for various causes and recent beneficiaries include Catholic Charities, Project HOME, Project Birthright and St. Katharine Drexel Parish in Chester, to name a few.

Strong groups within the parish include CYO, Home and School, a Widows’ Group and multiple prayer groups and study groups.

Valerie Babinecz, a parishioner for 33 years, believes “SS. Peter and Paul is a very strong faith community and that’s what keeps us together.” She is involved in multiple ways, including as lector for liturgies and a volunteer for Vacation Bible School. She was also part of a women’s group and will be a member of a new book club.

“Each pastor brought a unique perspective,” she said. 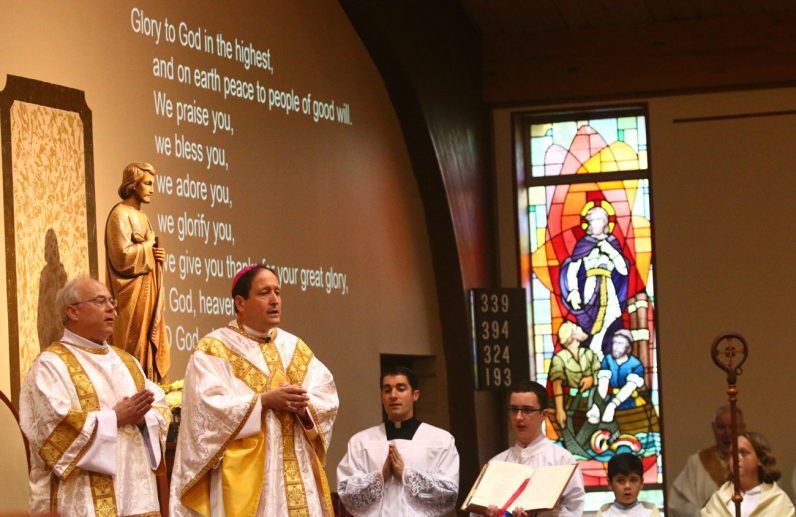 NEXT: Catholic youth: Thanks for asking our opinion, here’s what we think