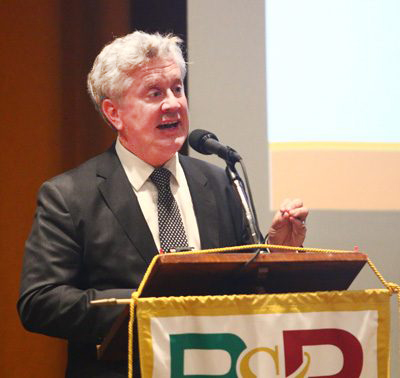 Samuel Casey Carter, the first chief executive officer of Faith in the Future Foundation, announced Oct. 4 he will be stepping down at the end of this year.

Since the foundation was begun five years ago, the steep declines in Catholic school enrollment in the 17 archdiocesan high schools, several of which had been recommended for closure, have slowed and the system stabilized. Under an agreement with the Archdiocese of Philadelphia, Faith in the Future continues to operate the archdiocesan high schools.

According to information from the foundation, Carter and a committee of the board of directors recently completed a strategic plan that “outlines key focus areas and actions required to further strengthen school operations across the system.”

With the plan completed, Carter and the board called for a new CEO to execute it, and he will leave to pursue “other professional career opportunities.”

“The assignment five years ago was to create a new institution that could help America’s first Catholic school system rebuild itself,” Carter said in a statement. “In the process of doing so, dozens of supportive partners have worked together to establish Faith in the Future as a national model for others to follow. I’m confident that the strong foundation established in Philadelphia will continue to benefit its Catholic schools well into the future.”

As Carter prepares to depart on Dec. 31, Faith in the Future now begins the search for a new CEO. Edward Hanway, the foundation’s board chairman, will work as interim CEO.

“Casey’s contributions over the last five years have been substantial and his vision for Catholic education in the Archdiocese of Philadelphia has served as a powerful motivator for our strategy going forward,” Hanway said.