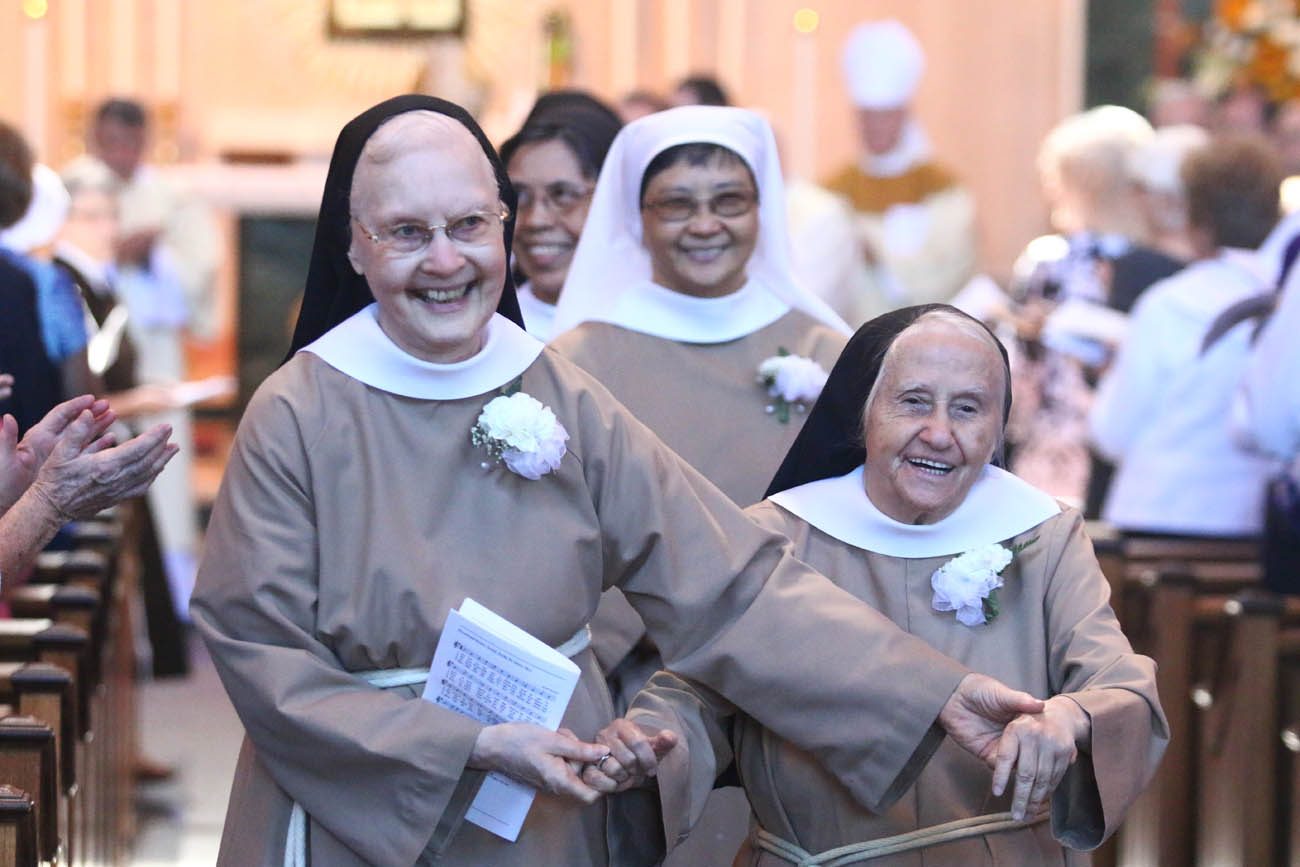 The Poor Clare sisters left their monastery in Langhorne for a special day at St. Andrew Church in Newtown on Sept. 23 for a Mass celebrating their 100th anniversary of establishment in the Philadelphia Archdiocese.

The Poor Clares of the Franciscan Monastery in Langhorne observed their 100th year in the Philadelphia Archdiocese on Saturday, Sept. 23 at a Mass celebrated by Cardinal Justin Rigali, retired Archbishop of Philadelphia, at St. Andrew Church in Newtown.

Cardinal Rigali had a special regard for the monasteries of enclosed nuns while he led the archdiocese.

The Mass was not celebrated at the monastery because after invitations went out the response was so strong their chapel would not hold all who wished to come, according to Sister Jean Therese Rossignol, the abbess.

(See a photo gallery from the Mass at St. Andrew’s here.)

The anniversary marks the arrival of the Poor Clares, an order of cloistered contemplatives, in Philadelphia in 1917 with the approval of Archbishop Edmond Prendergast. A temporary monastery was established at 1904 Girard Avenue in Philadelphia on Oct. 4, 1917, which served until a permanent monastery was located nearby at Girard and Corinthian Avenue the following year.

This remained in use for 60 years until 1977 when they left bustling North Philadelphia for the quietude of the Bucks County location that was more suitable for prayerful contemplative living.

Although the Poor Clares are officially observing 100 years in the Philadelphia area, their American history traces back to 1875 when two Poor Clares of the Primitive Observance (the rule established by St. Clare of Assisi in 1212) were commissioned by Pope Pius IX to bring their order in the United States. There had been previous attempts that had not taken hold.

The two were Sister Mary Magdalen Bentivoglio and Sister Constance Bentivoglio who were blood sisters as well as sisters in religion. They arrived in New York in 1876 with no money and very little English skills, just a letter introduction with the suggestion they approach bishops in New York, Cincinnati or Philadelphia for permission to establish a convent in their jurisdiction.

In New York Cardinal John McCloskey not only refused permission in his diocese but advised the sisters to go back to Italy. In Cincinnati there was another refusal.

Finally coming to Philadelphia, Archbishop James Wood withheld his decision but gave them a house at 3627 Walnut Street where they could stay. Ultimately he decided they could not establish a monastery in the diocese but he allowed them to remain until they could decide what they should do next.

In that era bishops were as a rule welcoming to congregations and orders of women religious but they were expected to conduct schools, hospitals, orphanages or homes for the aged. The idea of nuns whose ministry was exclusively to pray “was not in the spirit of the country,” as Cardinal McCloskey told Sister Mary Magdalen.

After leaving the Walnut Street residence the sisters took temporary shelter with the Ladies of the Sacred Heart at Eden Hall, a girl’s boarding school in the Torresdale section of Northeast Philadelphia.

There would be other false starts in New Orleans and Cleveland, until finally the congregation made a firm establishment in Omaha, Nebraska in 1878 at the invitation of Bishop Michael O’Connor, a former Philadelphian.

Everything happens for a reason and their brief stay in Philadelphia may have had a great deal to do with their ultimate establishment.

According to a history of the Poor Clares, while in Philadelphia on Walnut Street the sisters received assistance from local lay people especially Mrs. F.A. Drexel. That would be Emma Drexel, the step mother and virtual mother of St. Katharine Drexel.

Eden Hall, where the sisters received temporary shelter, was the convent where Emma Drexel’s own sister, Madam Louise Bouvier, was a nun. The local parish for Eden Hall and the Drexel summer residence was St. Dominic’s, where Bishop O’Connor, at that time Father O’Connor, was pastor until his appointment to Omaha just about the time Sister Magdalen and Constance arrived in Philadelphia. He was also a very close friend of the Drexel family.

Once firmly established in a diocese it became easier for the Poor Cares to spread to other dioceses. Mother Magdalen did not live to see the Philadelphia monastery established but before her death she entrusted to one of the sisters a ciborium that had been given to her while at Walnut Street in the hope it could someday return to a monastery in Philadelphia.

It is now a special heirloom at the Monastery of St. Clare in Langhorne, according to Sister Jean Therese. “We treasure it because it connects us to Mother Magdalen herself,” she said.

Right now the Langhorne monastery has 11 sisters, according to Sister Jean Therese. They range in age from 90s to the late 40s. Two are from Philadelphia and other sisters are from around the country as well as the Philippines and Africa.

The sisters still receive inquiries from prospective candidates who tend to be perhaps in their 40s, not their 20s. Sister Jean Therese is herself from Maine and has been a member of the community since 1993.

Although there have been minor modifications since the Second Vatican Council, monastic life is much the same as in the time of St. Clare. Yes, the habit is no longer wool, and while strict enclosure is mostly observed, sisters do go out to participate in elections and for doctor visits for the simple reason that doctors can’t be expected to bring the equipment used today along with them.

The sisters still observe the traditional devotions including the Office of Readings and the Liturgy of the Hours but they no longer get up in the middle of the night. The monastery does have a television, which is only used for short pre-screened religious or educational programs.

In keeping with their vow, the sisters live very simply, growing many of their own vegetables and relying on the goodwill offerings of the faithful. They also gain some income from the altar breads that are purchased by parishes for use in holy Communion.

“The life of prayer has always been at the center of my spirituality,” Sister Jean Therese said.

For her there is a special satisfaction in making the altar breads. “When that host is consecrated during Mass it becomes Jesus and the spiritual life grows in anyone who receives Jesus,” Sister Jean Therese explained. “They can reach other people. Jesus grows out through the world.”

PREVIOUS: Faith in the Future’s CEO will step down at year’s end

NEXT: Oktoberfest a huge hit for 300 young adults in hip locale