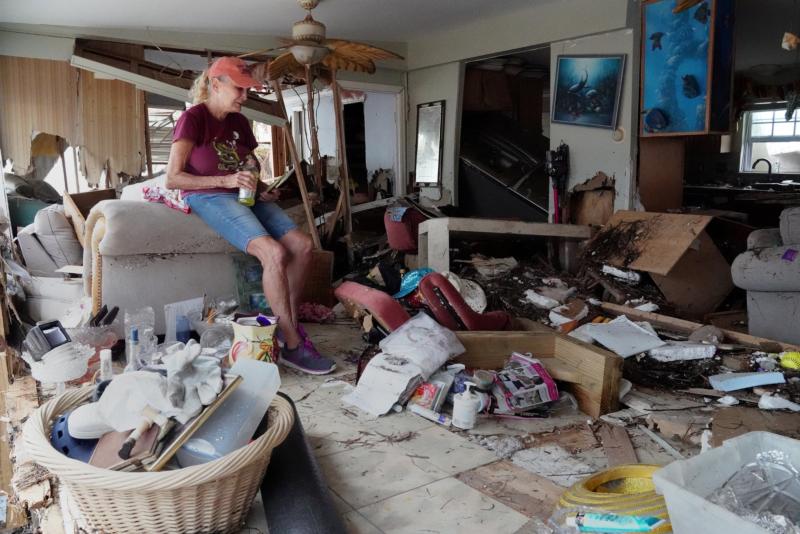 Joan Thoman sits in her destroyed house in Florida’s Big Pine Key as she looks for keepsakes Sept. 22 as the Keys continue to recover from Hurricane Irma.(CNS photo/Carlo Allegri, Reuters)

A lone statue of Our Lady sits in the rear of the property between a parking space and a stand of palm trees. A pile of canned goods from the parish pantry lay heaved in the briny mud. A team of maintenance men appeared overwhelmed as they frantically looked for the master valve to try to pressurize the water system.

And adjacent to the parish property, the American Red Cross has established a tent city — its temporary regional operations center and staff residence for the Florida Keys post-Irma.

The picture is a visible confirmation that the Big Pine and Marathon areas are among Florida’s ground zero for 2017’s most powerful Atlantic hurricane.

Irma will be remembered as one of the Atlantic’s strongest hurricanes on record, with peak winds of 185 mph, and Category 4 strength when it landed in the Florida Keys.

From Key Largo to Key West, the area is littered with storm-related wreckage of varying degrees, raising concerns about housing prospects especially for the many local employees and retirees who call this region home.

“We have said it will be a long process for recovery and I believe that is true, but I am very encouraged by the recovery efforts I see here — even from one week ago I see a huge difference,” said Rep. Jeanette Nunez, a Miami Republican who chairs the House Select Committee on Hurricane Response and Preparedness in Florida.

Nunez and her staff joined an ad hoc convoy of relief supplies gathered at a dozen Catholic parishes in schools in the Miami area and delivered to sites throughout the Florida Keys on Sept. 26 by a team of volunteers organized by the Miami Archdiocesan Missions Office.

Nunez, who has a vacation home in the Keys, said she also was touring the area and meeting with community leaders to rally resources for the Florida Keys.

“Today with this truckload of items we brought to donate to individuals, the elderly and low-income individuals, it is a humbling experience and I can’t say enough about the groups who collected the outpouring of support,” Nunez told the Florida Catholic, newspaper of the Miami Archdiocese. “It has been wonderful to see up close and personal that people make a difference and it is important to get involved and engaged in your community.”

Led by the efforts of St. Timothy parishioners Lourdes Mestre and Maria Blanco in Miami, along with their husbands and other volunteers, the post-hurricane team deployed a 26-foot truck full of donated bottled water, foodstuffs, cleaning supplies, toiletries and other items much of which were ultimately deposited at a regional food bank operation underway at St. Justin the Martyr Church in Key Largo.

Led by an courtesy escort vehicle from Miami-Dade Fire Department, caravan made its first round of stops in Key West, where they distributed supplies at low-income housing residences for the elderly and separately for women and children, as well as at the Basilica School of St. Mary Star of the Sea.

“This was extremely generous and you can tell it was a labor of love, and we can’t thank you enough,” Angelina Castillo Kelley, a housing manager for a Key West Housing Authority residence for senior citizens, told the Miami volunteers who left donations for the elderly public housing unit.

Along the way, the group were greeted by grateful “conchs,” Key West natives, including relatives of Key West Mayor Craig Cates.

Celice Cates-Gegg, the mayor’s sister who identified herself as a staff person at the senior citizen housing facility, said most of residents here stayed during the storm.

With the power out here for several days, everybody living on the top floors couldn’t come down the elevators, “which was a little aggravating, but the good side was of that they got up and moved around, they had to go up and down the stairs and they were walking more” and commenting on the benefits of that, Gegg noted.

“These donations make them feel loved and that somebody cares, because there are a lot of them here that don’t have any family or they cut ties because they came to live the Key West lifestyle and now they are 65 years old and they still in Key West but they are elderly and limited.”

Nearby at Samuel’s House shelter for women and children, Cheryl Hollen Cates, wife of the mayor and first lady of Key West, is a board member at Samuel’s House, told the Florida Catholic that the area is ready to start getting back to normal as much as possible.

“Key West is ready (for people to return), and Key West didn’t get hit as bad as the other Keys 20 miles north of us, and actually we are trying to help those poor people. I think from Sugarloaf to Big Pine and Marathon were among the worst hit.”

Elmiro Lito, Samuel House founder and CEO, expressed concern for trailer park residents in the Florida Keys, including those in Stock Island just north of Key West, farther north of here in Big Pine Key, and for others situated off the main roads.

“The government needs to get more inland to reach those people who can’t reach their trailers and there are people actually starving on Big Pine Key, and they have to get back in there and see who is hurting,” Lito told The Florida Catholic.

Samuel House had evacuated its residents to Miami during the storm but now is full again and turning people away who suddenly need housing following the hurricane.

State officials said that the Florida Keys would officially reopen for visitors and local tourism Oct. 1, three weeks ahead of its projected schedule to jump-start the local economy, though recovery efforts are ongoing.

Motorists were being warned by county officials to use “extreme caution” as they come through the area as there are “significant debris piles that are being picked up by cleanup contractors.”