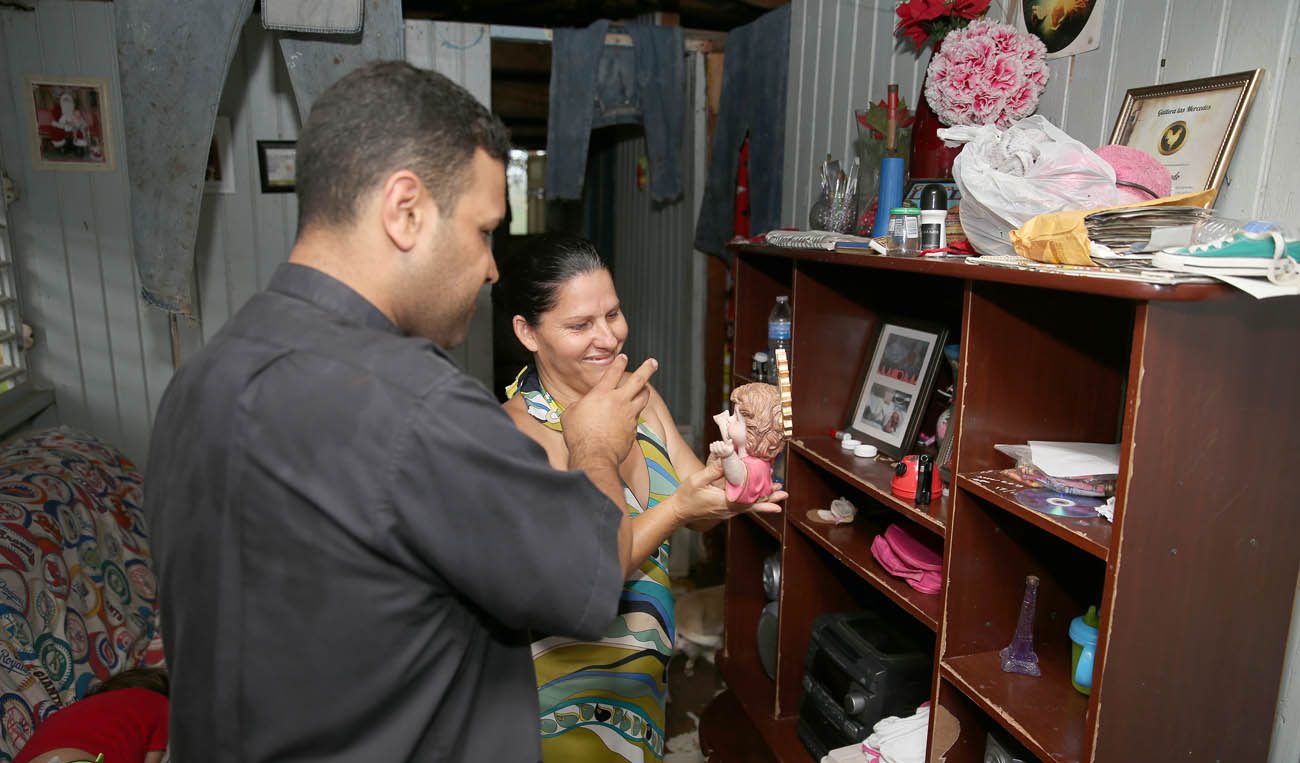 Father Carlos Francis Mendez, pastor of Immaculate Heart of Mary Church in Las Marias, Puerto Rico, blesses a woman's statue of the Christ Child at her home Oct. 24 in a remote area outside the town. Father Mendez, and parishioners distributed relief goods to her home and others in the poor area who were affected by Hurricane Maria. (CNS photo/Bob Roller)

LAS MARIAS, Puerto Rico (CNS) — By joining forces to create coalitions on behalf of those who are suffering in the wake of Hurricane Maria, the Catholic Church in Puerto Rico has been fulfilling Pope Francis’ expressed wish to see “a church that walks with the poor.”

At the parish level, that cooperation has been notable at Immaculate Heart of Mary Catholic Church in Las Marias, a small town nestled in Puerto Rico’s western mountains.

Father Carlos Francis Mendez, pastor of Immaculate Heart, has teamed with the local Pentecostal church, Plenitud lay youth group and Samaritan’s Purse to pool and distribute material resources in a coordinated way to the poorest sectors of Las Marias.

Initially, the church’s parish hall became a busy warehouse and operations center full of volunteers providing relief to victims of Hurricane Irma in Haiti. Hurricane Maria refocused their mission toward the local community.

“What we have done is create Proyecto de Vida (Life Project) by joining different religious and civil organizations to gather all we have, and that way magnifying what we can give to the poor,” Father Carlos told Catholic News Service.

Local and federal agencies had been notably slow distributing aid to Las Marias. Some aid was brought in during the first weeks after Hurricane Maria, but it had been sitting undelivered to the needy.

Deep off-road in Plato Indio sector Oct. 24, Father Carlos was busy leading a party of volunteers to distribute food, water filters and plastic tarps, which are mainly being used to cover torn roofs. At each stop, the group also prayed for the families they were helping.

Plato Indio is a maze of narrow one-lane roads recently cleared of landslides debris and fallen power lines. It is an area dotted with unsafe houses and extremely poor families.

“We have been doing this since day one,” said the young priest. “The idea is to get to the least (because) here it has been disastrous and aid was slow.”

He said that during the first weeks after Hurricane Maria, the church’s delivery of aid was extremely difficult because it had to be done by foot because practically all local roads were blocked by landslides.

“We sort them, put them in mixed bags and deliver them door to door out in the countryside,” she said. “Last Saturday we went out and delivered all we had, and when we came back there was a large load of clothing items already waiting for us for the next distribution.”

The last round of donations received by the coalition included $5,000 from the Diocese of Arecibo for food items, hundreds of clothing items from the Pentecostals, as well as 200 water filters and hundreds of solar-powered lightbulbs from Samaritan’s Purse.

One of the parish volunteers working with the church relief operation was Martha Vega. Before the hurricane, the young mother had lost her husband, her son and her daughter. Both men are incarcerated and the girl has been placed under child protective services. Hurricane Maria took all Vega had left: her house in a nearby wooded area and her personal property.

“I have lost everything. My house was torn apart. It took me four days to make it to my house walking by way of trails because the road was impassible,” said Vega. She was temporarily staying with a friend. “The only thing I can do now is start over,” she told CNS. “I’m motivated because I’m here, helping others, and because all help that I have requested, I have received it here.”

Luz Lamboy, 82, who has Alzheimer’s, was one of the last recipients of aid in Plato Indio. Cheerful and happy to have company, she was grateful for the items received.

When Father Carlos identified himself to her as a priest, she answered with a big smile: “I don’t care who you are, as long and you bring me the gift of God’s word.”

PREVIOUS: Mideast church leaders look to U.S., but want voice in own destiny