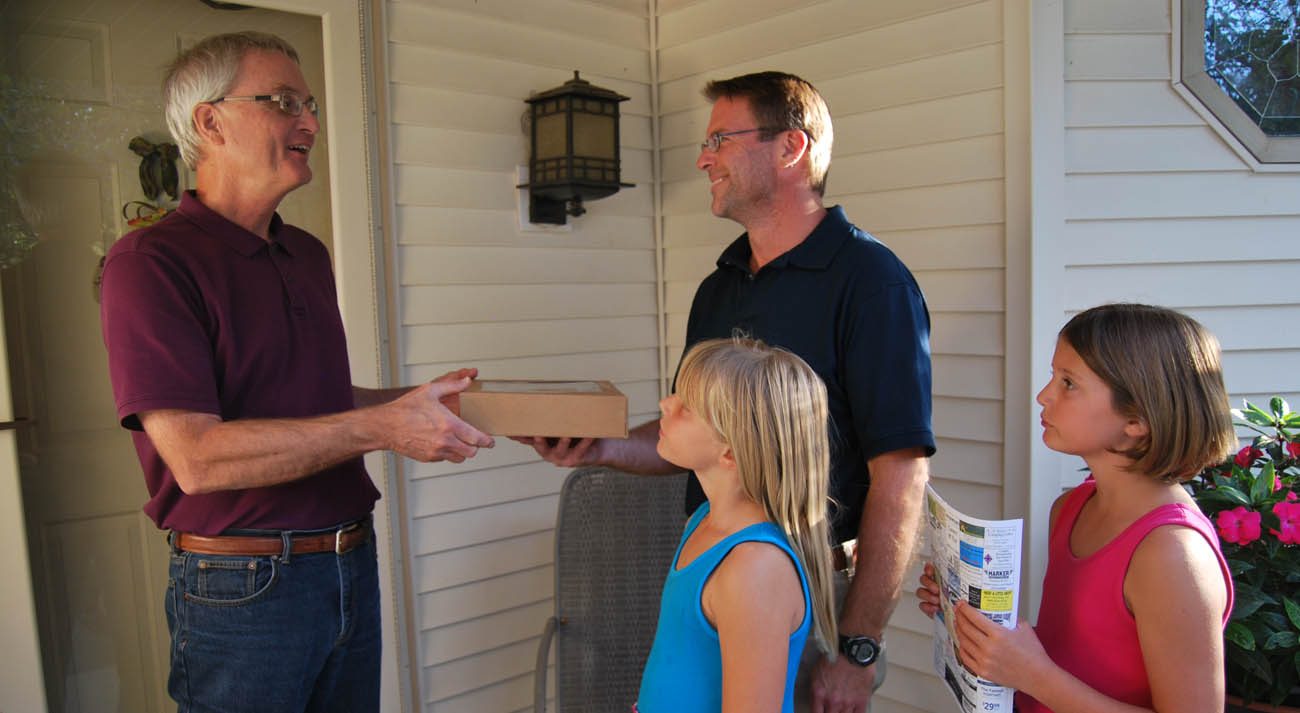 MONONA, Wis. (CNS) — “Hello, we’re from Immaculate Heart of Mary Parish in Monona. We understand that you recently moved into the area. We just wanted to welcome you to the neighborhood.”

That greeting — along with an apple pie, a bulletin and a smile — are what the parish’s “Apple Pie Ambassadors” have given out nearly 50 times since May.

Earlier this year, the Immaculate Heart of Mary Parish Council came up with the idea for the ambassadors to serve as a “welcome wagon” for people who recently moved into the area, both Catholics and otherwise.

They are invited to check out the parish, which is in the Diocese of Madison, and they also are informed of some of the bigger events that have a presence in the neighborhood such as the parish festival and fish fries.

An Immaculate Heart of Mary parishioner who is a realtor sends program leader Sharon Coffey a list of the new homes sold in Monona every month.

“We’d eventually like to get to the whole parish boundaries,” Coffey told the Catholic Herald, Madison’s diocesan newspaper. “Right now, we’re just getting started and we kind of want to feel our way through these houses (in Monona).”

From there, she assigns which of the dozen ambassadors — ranging in age from their 30s to 60s — is to make the visit, typically close to their own residences.

The visits are typically done in pairs and usually on Saturdays when people are likely to be home. Parishioners’ children sometimes go along, too.

Coffey said she hopes the ambassadors will make a connection and a friendship, “and maybe it will grow into something.”

“We’re coming in contact with all different kinds of people,” she added, including people of varying ages, marital status, and religion.

If no one is home, the ambassadors will try again on later dates before leaving a door hanger with a greeting from the pastor, Father Chad Droessler, and information about the parish.

Along with meeting new neighbors, the ambassadors “get to know different people in the parish too” through making the visits together, Coffey said.

Parishioner Christopher Speece is one of the ambassadors.

He’ll typically make the visits with his daughters, Clare and Monica.

“The initial conversations have been much more positive than I thought they would be,” Speece said, expecting negative reactions or door slamming in his face, but “that really hasn’t happened.”

Speece will give the standard welcome, offer the pie and bulletin, and “we just got into conversations from there.”

He added religion topics didn’t come up unless the new neighbors would talk about it.

“It was more a friendly visit,” he said, but added that he’s hoping to see them at church soon.

He seconded the fact that ambassadors meet a variety of people while making the visits, saying conversations typically last between five and 15 minutes.

Those he met included a business owner who told his success story, a woman from Africa who came to the U.S. to help her daughter who is expecting her first child, and even some people he had previously met at a neighborhood block party and were looking for a church.

Some also have been Catholic, but not active Massgoers.

“I hope it continues for the long term … eventually every person that moves into Monona gets a visit from IHM,” he said, and he hopes to meet a parishioner in the future who the first person he or she met upon moving to Monona was an Apple Pie Ambassador.

Wondrash is a reporter at the Catholic Herald, newspaper of the Diocese of Madison.

NEXT: Bishops’ migration chairman asks for extension of immigration status