Neumann U passes the torch of leadership in grand inaugural 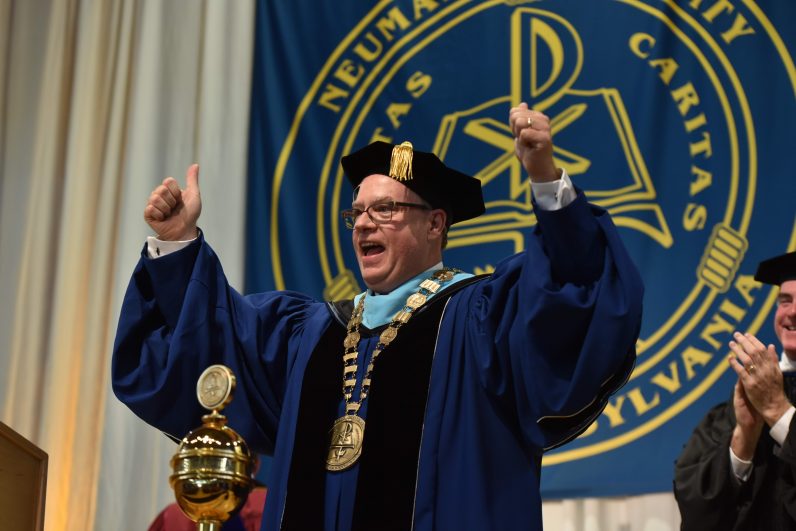 Dr. Chris E. Domes celebrates higher education in the Franciscan tradition as he becomes the sixth president of Neumann University at the inauguration ceremony Oct. 6.

For the first time in 21 years, the Neumann University community gathered this month to inaugurate a president. In a ceremony Oct. 6 awash in academic regalia and medieval symbolism, Dr. Chris E. Domes became the new leader of the Catholic institution in Aston, Delaware County.

Domes accepted the presidential medallion and looked to the future in his address, saying, “It is our destiny as a Catholic university in the Franciscan tradition to respond to the needs of this generation with compassionate hearts. Then, in turn, we will ask our students and our alumni to respond with a compassionate heart to those they encounter in their lives.”

In his address Domes called for connection and compassion. “Our students are looking for engagement and purpose,” he said. “In a time when one can find daily examples of deep-rooted anger, high levels of mistrust and division, institutions with strong purpose-driven missions are places of healing, hope, peace and renewal.”

Domes said the administration that he now leads must “find creative ways to collaborate, to provide access for students, and we must be willing to be bold.”

More than 1,000 people filled the floor of the Mirenda Center for Sport, Spirituality and Character Development to witness the transition in leadership from president emeritus Dr. Rosalie Mirenda, who led the university from 1996 until her retirement this year.

The inauguration ceremony concluded a busy week of campus activities to celebrate the university milestone, including receptions for resident students and commuters, a Theology on Tap discussion with Domes and his wife Mary, numerous service activities, a Mass and the Rocco A.’79 and Mary F. Abessinio Endowed Lecture in Management and Entrepreneurship.

NEXT: Sales exec to take leadership of Archbishop Ryan HS