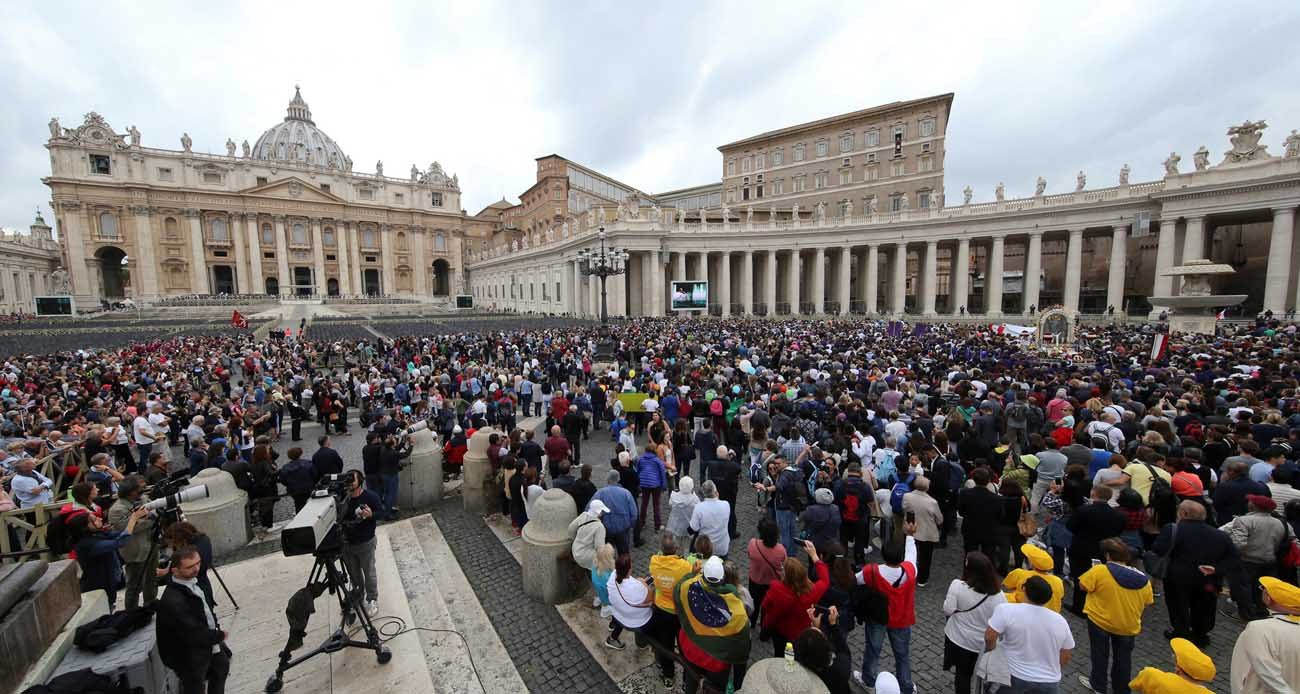 A large crowd is seen as Pope Francis leads the Angelus in St. Peter's Square Oct. 22 at the Vatican. (CNS photo/Tony Gentile, Reuters)

VATICAN CITY (CNS) — Catholics must make a real effort to share the Gospel with all people, fighting “the recurring temptation” that leads some to focus only on internal church matters or to be pessimistic about evangelization efforts, Pope Francis wrote.

“May the Good News that in Jesus forgiveness triumphs over sin, life defeats death and love conquers fear be proclaimed to the world with renewed fervor and instill trust and hope in everyone,” he wrote in a letter encouraging preparations for an “extraordinary missionary month” to be celebrated in October 2019.

The Vatican released the letter Oct. 22, World Mission Sunday, as Pope Francis was reciting the Angelus with visitors gathered in St. Peter’s Square.

“I exhort everyone to live the joy of mission by witnessing to the Gospel in the areas where they live and work,” Pope Francis said. “At the same time, we are called to support with affection, concrete aid and prayer the missionaries who have set off to proclaim Christ to those who still do not know him.”

The pope told visitors in the square, “It is my intention to promote an extraordinary missionary month in October 2019 with the goal of increasing the passion for the church’s evangelizing activity ‘ad gentes,'” a phrase meaning “to the nations” and used to describe missionary activity focused on people who still have not heard the Gospel.

The special missionary month will coincide with the centennial of a major document on missionary activity issued by Pope Benedict XV. “In 1919, in the wake of a tragic global conflict (World War I) that he himself called a ‘useless slaughter,’ the pope (Benedict XV) recognized the need for a more evangelical approach to missionary work in the world, so that it would be purified of any colonial overtones and kept far away from the nationalistic and expansionistic aims that had proved so disastrous,” Pope Francis wrote.

The document, and the Second Vatican Council 50 years later, emphasized how missionary activity is essential to the life of the church, Pope Francis said. And St. John Paul II noted how Christians’ mission to spread the Gospel could be seen as having just begun.

To be Christian is to be missionary, he insisted. It “can no longer be enough” simply to try to keep one’s parish or diocese going.

“Let us not fear to undertake, with trust in God and great courage, a missionary option capable of transforming everything, so that the church’s customs, ways of doing things, times and schedules, language and structures can be suitably channeled for the evangelization of today’s world rather than for her self-preservation,” the pope wrote.

Pope Francis prayed that the centennial of Pope Benedict’s document and the extraordinary mission month would “serve as an incentive to combat the recurring temptation lurking beneath every form of ecclesial introversion, self-referential retreat into comfort zones, pastoral pessimism and sterile nostalgia for the past.”

“In these, our troubled times, rent by the tragedies of war and menaced by the baneful tendency to accentuate differences and to incite conflict,” he prayed that Gospel hope would be shared and spread all over the world.

NEXT: World needs you to be courageous, pope tells Canadian youths