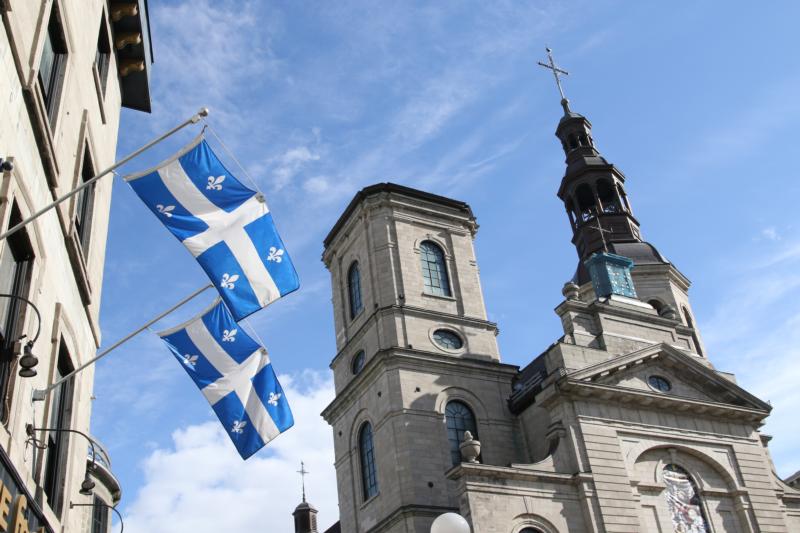 Quebec provincial flags are displayed outside a building across the street from the Cathedral-Basilica of Notre-Dame de Quebec in Quebec City Oct. 5. (CNS photo/Gregory A. Shemitz)

MONTREAL (CNS) — A few years ago, lawyer Dominique Boisvert left Montreal looking for a quieter place. He moved to Scotstown, population just over 500. For this father of the voluntary simplicity movement in Quebec, the time had come to slow down the pace and lighten commitments.

No luck: He has just been appointed mayor of his city.

“I had no intention of getting into politics. I failed miserably,” he said, laughing. He said he dreams of politics that are more than managing sewers and taxes.

“Yes, it’s utopian, but utopia has to lead the world if we don’t want dystopia to destroy it.”

Although most candidates for election avoid talking about their faith and involvement in politics, some candidates say their faith does play a role in their desire to serve their community.

Municipal elections are Nov. 5 in Quebec. Since no one in Scotstown wanted to become mayor, Boisvert submitted his name 48 hours before the deadline. On Oct. 6, he was “elected” without opposition.

“Faith has not played a role in my decision, but in my reflection, yes,” he said.

This self-described idealist is a well-known writer. In recent years, he has published many social essays with Catholic publisher Novalis.

Boisvert admits being “passionate” about the Gospel.

“The values that dictate my choices are Christian. If I invite people to my house, I give them the best reception possible. It has nothing to do with being a believer or not. But these values are at the center of my life, as well as the concern for others and for the common good,” he said.

He said he believes his faith commitments over the years work “neither for nor against” him.

“People see the individual. I wouldn’t have talked about it in an electoral campaign. People see the link or not, and I remain honest,” he added. 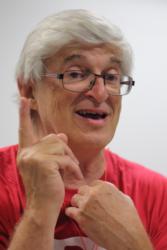 Christian author Dominique Boisvert, inspired by his faith to run for mayor of Scotstown, Quebec, is pictured in a 2016 photo. Since no one ran against him, he was proclaimed mayor Oct. 6. (CNS photo/Francois Gloutnay, Presence)

In Trois-Rivieres, 57-year-old Pierre Montreuil is running as an independent candidate in the Carmel district, where he was born and lived most of his life. This corporate communicator also spent 14 years at the pastoral office of the Diocese of Trois-Rivieres. These past three years, he was the communications and advertising coordinator for the Notre-Dame-du-Cap Shrine, the biggest Marian shrine in Canada. He speaks passionately about his desire to serve the people of his native neighborhood and to give back to his community.

“When I think about being Christian, I think we have to be aware of the issues that affect people’s lives. To be a Christian without being close to the realities of life is to be disconnected. We cannot live in a bubble,” he said.

Montreuil said he’s not running “against” anyone and that his goal is not to “beat” a political opponent.

“I offer values, an attitude, and a way of doing things that I have been carrying for years. I want to build on transparency, accessibility and honesty. Everyone is looking for happiness,” he said. “Even as a city official, it is a motivation to create a place where it will be good to live.”

In Montreal, Fadia Nassr will try to be elected councilor for the Projet Montreal party in the Bordeaux-Cartierville district, where about half of the population has immigrated. Nassr moved to Quebec when she was 18.

“Everyone has to do their part in society, and everyone must keep their values by exercising this right,” she said.

Over the years, she has worked for community events and humanitarian organizations. She became involved in raising awareness for persecuted Christians in the Middle East. More recently, she has been involved with the welcoming of Syrian refugees in Canada.

Born in Syria to an Orthodox father and a Byzantine Catholic mother, she believes that candidates’ personal beliefs can nurture a unifying vision of politics.

“Faith drives me to be righteous with everyone and to reflect the respect to live together between each person. I have friends of all religions,” said Nassr, 45. “My personal faith has helped me throughout my life to overcome obstacles. I have had several very difficult challenges (to overcome). It gives me hope. Faith taught me gratitude, and how to be grateful for the positive in my life.”

Whatever the nature of the problem, she believes the challenge is always to go on.

“This really is what prompted me to stand for election: where some people would have lived in despair, my faith helped me find my energy, see the positive, and move on.”

As the Nov. 5 elections near, she emphasizes the richness of diversity and the respect for differences. She said she wants to serve citizens in a way that takes into account their real needs, regardless of their beliefs, wealth or age.

“The key is to go forward, to carry a message of perseverance, of existence, of citizen participation. It gives hope of continuity,” she said.

NEXT: App developed by Phila. nun teaches how to pray in sign language