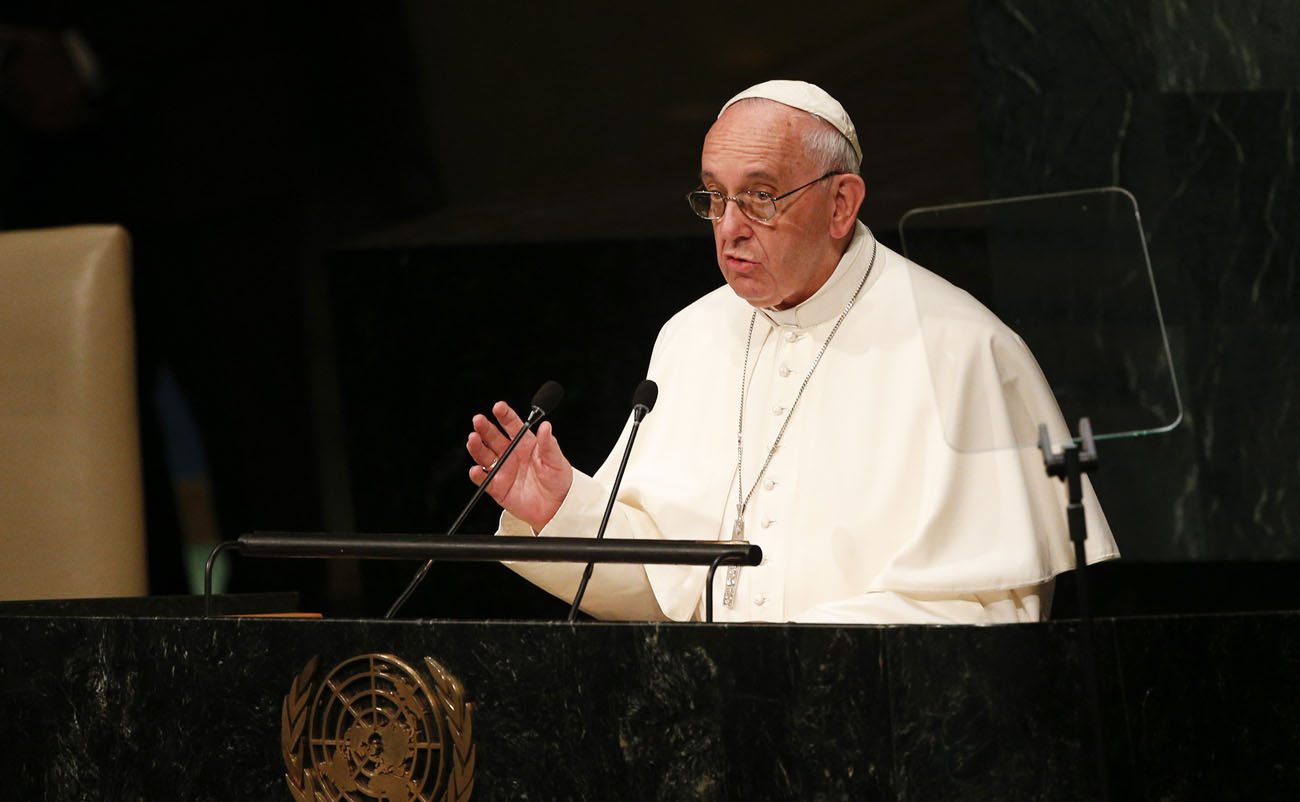 Pope Francis addresses the U.N. General Assembly in New York in 2015. Following in the footsteps of Pope Pius XII, every pope in the "nuclear age" has pleaded with the world's powers to lessen the threat of nuclear war and reduce nuclear arsenals. (CNS photo/Paul Haring)

VATICAN CITY (CNS) — More than two years before the first atomic bomb was dropped, Pope Pius XII warned of the “catastrophic” consequences that could come from using the discovery of nuclear fission to create weapons.

Addressing the Pontifical Academy of Sciences in February 1943, Pope Pius noted that scientists were saying that nuclear technology could produce “an amount of energy that could take the place of all the large electrical power plants of the whole world.”

But, he said, it was essential to ensure the technology was used only for peaceful purposes, “because otherwise the consequence could be catastrophic, not only in itself but for the whole planet.”

After the United States used atomic bombs on Hiroshima and Nagasaki, Japan, in 1945, Pope Pius described the nuclear bomb as “the most terrible weapon that the human mind has ever conceived.”

For more than 70 years, the popes and Catholic leaders around the globe have echoed that judgment. And while, for a time, the policy of nuclear deterrence was seen as morally acceptable as long as efforts continued for a complete ban of the weapons, today that is no longer the case.

“Nuclear deterrence is increasingly seen as an excuse for the permanent possession of nuclear arsenals that threaten humanity’s future,” Stephen Colecchi, director of the U.S. bishops’ Office of International Justice and Peace, wrote in a 2016 article for the blog of the Berkley Center for Religion, Peace and World Affairs.

Colecchi is scheduled to participate in a high-level Vatican meeting Nov. 10-11 on “Perspectives for a world free from nuclear weapons and for integral disarmament.”

The conference, sponsored by the Dicastery for Promoting Integral Human Development, will bring together Nobel laureates, government and U.N. officials, theologians and peace activists to strategize ways to move the disarmament process forward.

Given that the conference is being held at a time of severely heightened tensions between the United States and North Korea, several Italian media outlets described the Vatican meeting as Pope Francis’ attempt to mediate the U.S.-North Korean crisis.

Greg Burke, director of the Vatican press office, said Oct. 30 that while Pope Francis “works with determination to promote the conditions necessary for a world without nuclear weapons,” it is “false to speak of a mediation on the part of the Holy See.”

Coincidentally though, the Vatican conference will take place as U.S. President Donald Trump is scheduled to visit Japan, South Korea, China, Vietnam and the Philippines. North Korea’s ongoing missile testing program, and Trump’s tough talk about destroying the nation, are expected to top the agenda of the Nov. 3-14 trip.

Following in Pope Pius’ footsteps, every pope in the “nuclear age” has pleaded with the world’s powers to lessen the threat of nuclear war and reduce nuclear arsenals.

St. John XXIII, in his 1963 encyclical “Pacem in Terris,” wrote: “Justice, right reason and the recognition of man’s dignity cry out insistently for a cessation to the arms race. The stockpiles of armaments which have been built up in various countries must be reduced all round and simultaneously by the parties concerned. Nuclear weapons must be banned.”

In his historic address to the United Nations in 1965, Blessed Paul VI told global leaders, “It is hard to foresee the future, but easy to assert that the world has to set out resolutely on the path toward a new history, a peaceful history, one that will be truly and fully human, the one that God promised to men of goodwill. The pathways are marked out before you, and the first one is disarmament.”

Thirteen years later, Pope Paul sent a message to the first U.N. conference on disarmament. In it, he acknowledged that, for government leaders, who have an obligation to protect their people, “the temptation is strong to ask oneself if the best possible protection for peace does not in fact continue to be ensured, basically, by the old system of the balance of forces between the different states or groups of states.”

“Even though the ‘balance of terror’ has been able to avoid the worst and may do so for some time more,” he said, “to think that the arms race can thus go on indefinitely, without causing a catastrophe, would be a tragic illusion.”

Even Pope John Paul I, in the brief month he spent in office, spoke about the importance of ridding the world of its nuclear stockpiles. In a speech Aug. 31, 1978, to members of the diplomatic corps, he said Vatican officials were ready to offer their support to all efforts in “the search for better solutions to the great problems that see at stake detente, disarmament, peace, justice, humanitarian measures and aid, (and) development.”

In his 26 years as pontiff, St. John Paul II repeatedly and strongly called for an end to the nuclear arms race and a true commitment to disarmament.

But the most striking of his pleas came in 1981 when he visited Hiroshima and Nagasaki.

Standing at the Peace Memorial in Hiroshima, he said that since the bombing of the city in 1945 “nuclear stockpiles have grown in quantity and in destructive power. Nuclear weaponry continues to be built, tested and deployed,” making the destruction of humanity “a real possibility.”

“On this very spot where, 35 years ago, the life of so many people was snuffed out in one fiery moment,” he said, “I wish to appeal to the whole world on behalf of life, on behalf of humanity, on behalf of the future.”

Pope Benedict XVI, in his first message for World Peace Day, described the possession of nuclear weapons as a defensive strategy to be “not only baneful but also completely fallacious.”

“In a nuclear war there would be no victors, only victims. The truth of peace requires that all — whether those governments which openly or secretly possess nuclear arms, or those planning to acquire them — agree to change their course by clear and firm decisions, and strive for a progressive and concerted nuclear disarmament,” Pope Benedict wrote in the message for World Peace Day 2006.

Pope Francis has continued the papal calls for disarmament and is expected to do so again when he addresses the Vatican conference.

“The total elimination of nuclear weapons,” he said in a message to the United Nations in March, is “both a challenge and a moral and humanitarian imperative.”

PREVIOUS: Religious from other countries minister to Turkey’s Latin-rite community

NEXT: After Marawi, terrorists remain threat in Philippines, officials say