Ex-head of Vatican hospital found guilty of abuse of office 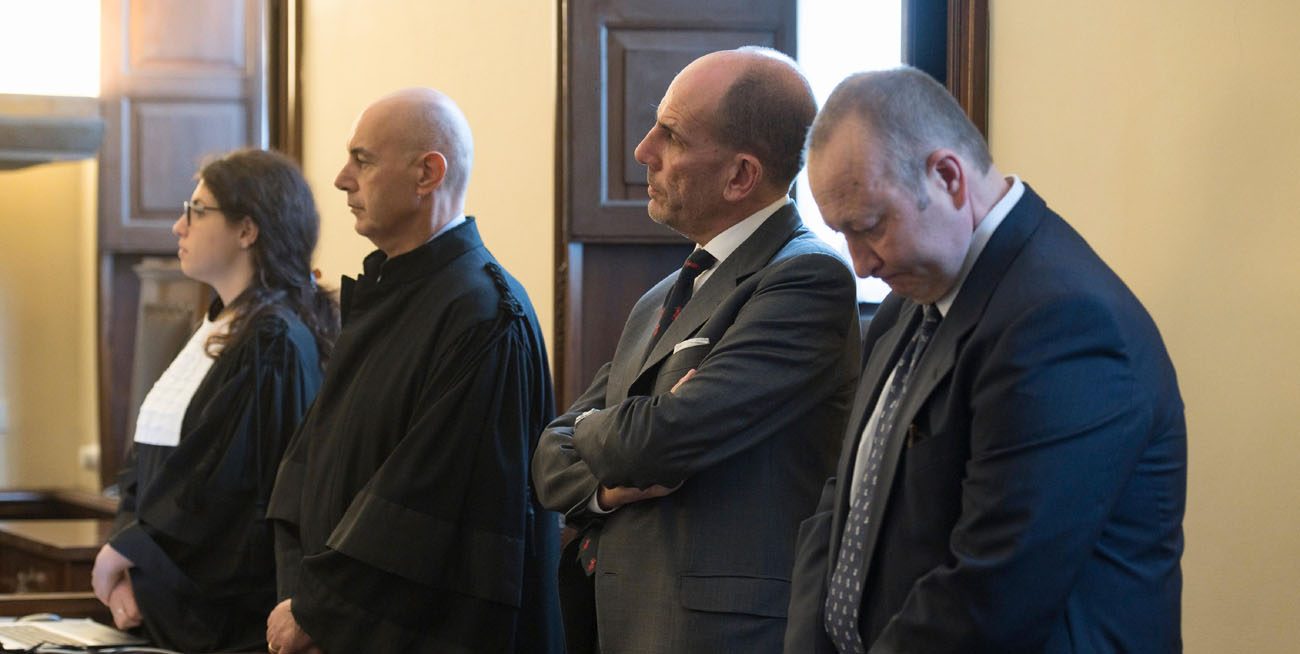 Giuseppe Profiti, second from right, former president of Bambino Gesu hospital in Rome, and Massimo Spina, right, former treasurer of the hospital, are pictured during their sentencing at the Vatican court Oct. 14. Profiti was found guilty of illicit appropriation and use of funds belonging to the Bambino Gesu Foundation. He was given a suspended sentence of one year in jail and a 5,000 Euro fine. Spina was absolved of the charges. (CNS photo/L'Osservatore Romano)

VATICAN CITY (CNS) — A Vatican court found the former president of the Vatican-owned pediatric hospital guilty of abuse of office for using donations belonging to the hospital’s foundation to refurbish a Vatican-owned apartment used by Cardinal Tarcisio Bertone, former Vatican secretary of state.

Originally charged with embezzlement, Giuseppe Profiti was sentenced to one year in jail and fined 5,000 ($5,900) euros on the reduced charge, but the sentence was suspended. The three-judge tribunal dismissed charges against Massimo Spina, the hospital’s former treasurer. The judgments were handed down Oct. 14.

The original indictment said Profiti, who was president of Bambino Gesu hospital from 2008 to 2015, and Spina extracted 420,000 euros for non-institutional ends from 2013 to 2014 by using hospital foundation money to refurbish Vatican property in order to benefit a construction company owned by Gianantonio Bandera. The company, Castelli Re, went bankrupt in 2014.

Profiti argued in court that the money had been an investment because the apartment’s refurbished areas were to be used for fundraising events to benefit the hospital.

Bandera had been asked to provide a six-figure “donation” to the hospital foundation, according to trial testimony. Spina testified he tried to get the “donation” from Bandera, but Bandera cited financial difficulties with the bankruptcy.

He had been sentenced to six months’ house arrest while he was still hospital president after being found guilty in 2008 of taking bribes and kickbacks at a different job. As president of Italy’s Liguria region, he was found guilty of the impropriety when assigning or promising contracts to companies bidding for providing food services to public schools and hospitals in the cities of Genoa and Savona. At least four others were found guilty in the same investigation.

PREVIOUS: Christian life is a love story with God, pope says at canonization

NEXT: Pope announces Synod of Bishops dedicated to people in Amazon