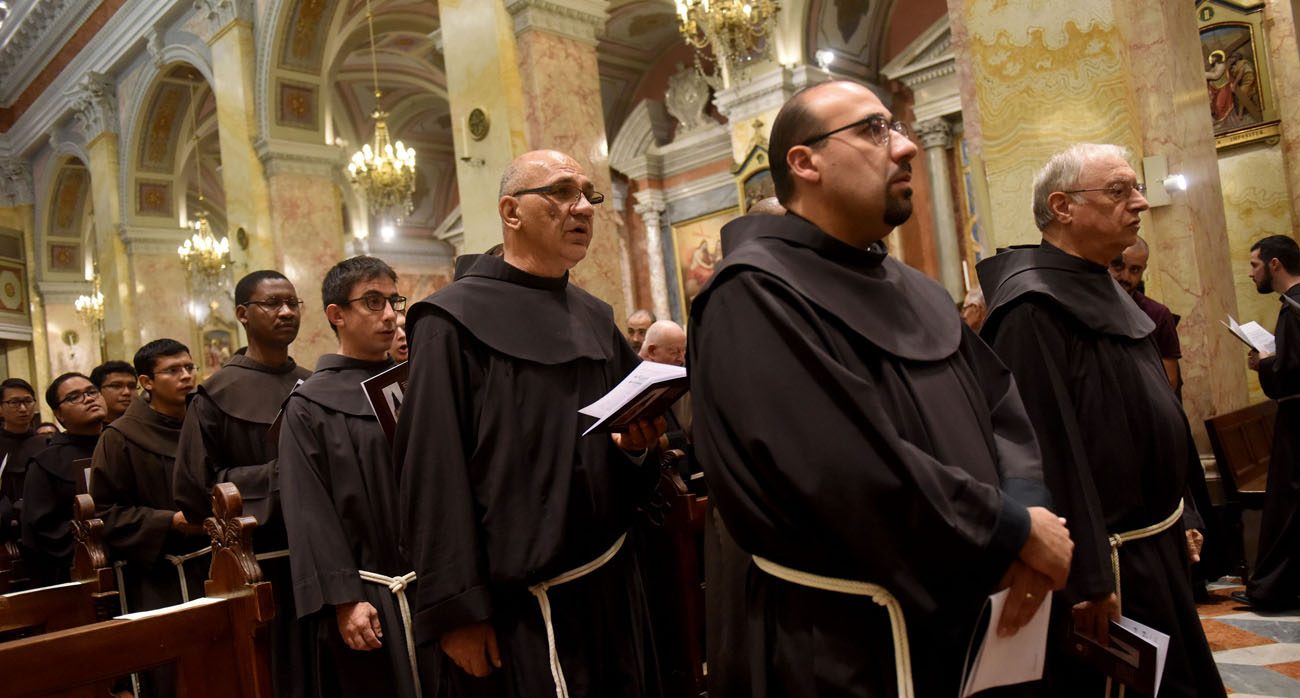 Franciscans pray during the ceremony for the opening of the celebrations of the anniversary of 800 Years of Franciscan presence in the Holy Land Oct. 16 at the Church of St. Saviour in Jerusalem's Old City. (CNS photo/Debbie Hill)

VATICAN CITY (CNS) — The Franciscans assisting the Christian minority and caring for the churches and shrines in the Holy Land are “ambassadors” of all the people of God, Pope Francis said.

Marking the 800th anniversary of the order’s presence at the places where Jesus was born, lived and died, the pope sent a letter to the Franciscan Custody of the Holy Land, an administratively autonomous province of the Franciscan order.

The custody keeps “the Christian witness alive, studying Scripture and welcoming pilgrims,” he said in the letter, dated Oct. 17, and addressed to Franciscan Father Francesco Patton, the official custodian, or custos, of the Holy Land.

The pope recalled how St. Francis of Assisi sent members of his recently founded order out on mission in 1217 to all nations on earth as witnesses of “faith, fraternity and peace.”

This broadened horizon of evangelization “was the beginning of an extraordinary adventure,” which brought the first Franciscans to the Holy Land 800 years ago.

Today, the congregation is dedicated to living alongside brothers and sisters of different cultures, ethnicities and religions, “sowing peace, fraternity and respect,” he said.

The pope encouraged the Franciscans to continue to: be at the service of the many pilgrims visiting the holy places; study sacred Scripture and the faith’s archeological heritage; support local church communities; help the poorest and weakest; and teach young people, “who often risk losing hope in a situation still without peace.”

“You are ambassadors of the whole people of God, who have always supported you generously, in particular through the traditional Good Friday collection” for the Holy Land and through the Vatican’s Congregation for Oriental Churches, which is currently marking the centenary of its foundation.