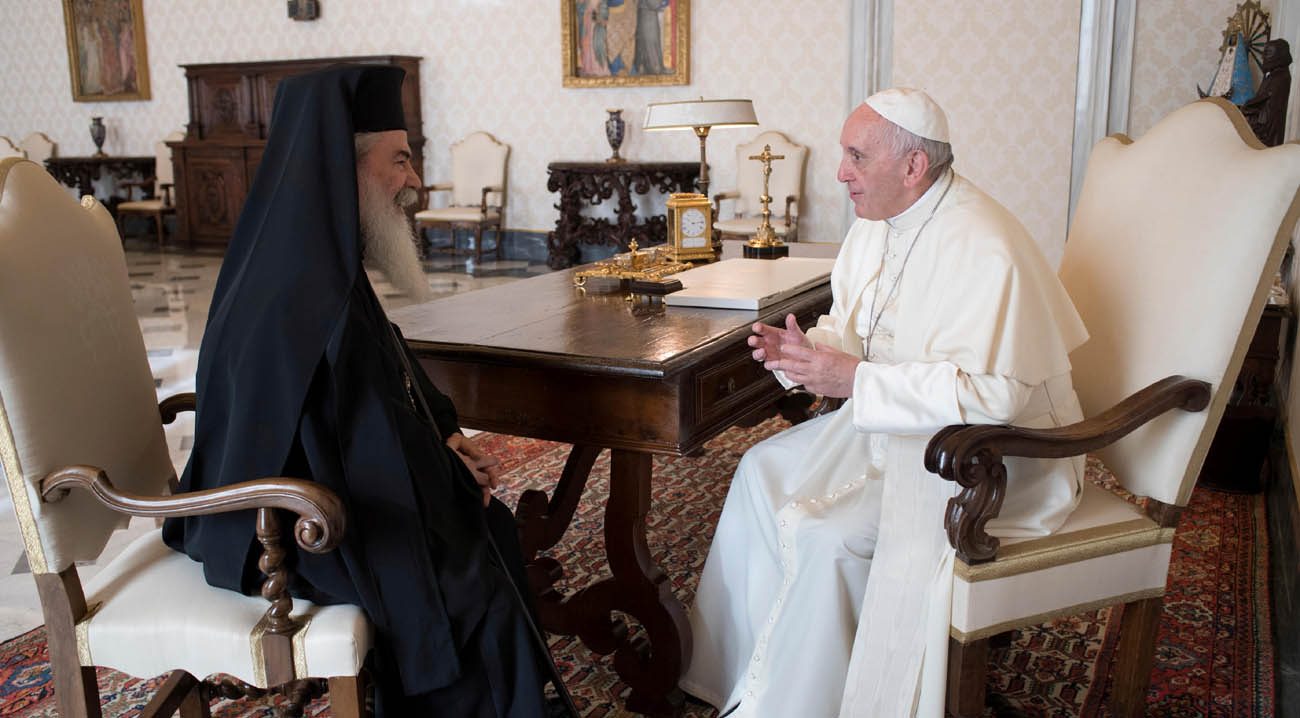 UPDATED – VATICAN CITY (CNS) — As minorities living in a troubled land, Christians in the Holy Land must forgive each other for past mistakes and work together for the future of their communities, Pope Francis told the Greek Orthodox patriarch of Jerusalem.

Patriarch Theophilos III made an official visit to the Vatican in late October, meeting Pope Francis Oct. 23 and praying with him for peace.

“How good it would be to say of Catholics and Orthodox living in Jerusalem what the Evangelist Luke said of the first Christian community: ‘All who believed were together … one heart and soul,'” the pope told the patriarch.

Better cooperation is especially needed “in supporting Christian families and young people, so that they will not be forced to leave their land,” the pope said. “By working together in this delicate area, the faithful of different confessions will also be able to grow in mutual knowledge and fraternal relations.”

Pope Francis also told the patriarch that the “Status Quo must be defended and preserved,” referring to a set of agreements ensuring the multireligious character of Jerusalem’s Old City and outlining the division of ownership and responsibilities of various sites holy to Christians, Muslims and Jews.

Patriarch Theophilos, according to a statement posted later on the patriarchate’s website, told Pope Francis that he and the other Christian leaders of the Holy Land “are fully united in opposition to what we see as an attempt to change the provisions and the spirit of the historic Status Quo and the delicate balance that must exist if the Holy Land is to be sustained in its integrity as a region where many peoples can live and flourish and be witnesses to the divine-human encounter, of which the holy sites are a tangible sign.”

“The historic rights of the Christian community are being undermined,” he said, and “recently there has been introduced into the Knesset (the Israeli parliament) a proposed bill which, if passed into law, would change fundamentally the rights of the churches over their land and property.”

Working together to oppose the draft bill, he said, “we shall help in the best way we can to ensure that our region remains what it has always been, a place where peoples of many cultures and religions may live in peaceful co-existence and mutual regard.”

Pope Francis told the patriarch that a step forward in real ecumenical cooperation was taken in 2016-17, when representatives of the Roman Catholic, Greek Orthodox and Armenian Orthodox churches agreed to work together to restore the traditional site of Jesus’ burial and resurrection in Jerusalem’s Church of the Holy Sepulcher.

The various Christian communities present in the Holy Land have not always been so cooperative or even kind to other another.

“It is not possible to change the past,” the pope said, “but, without forgetting grave failures of charity over the centuries, let us look to a future of full reconciliation and fraternal communion, and take up the work before us, as the Lord desires.

“May we not let the memory of times marked by lack of communication or mutual accusations, or present difficulties and uncertainty about the future, prevent us from walking together toward visible unity, nor hinder us from praying and working together to proclaim the Gospel and to serve those in need,” Pope Francis prayed.

Christian communities in the Holy Land, he said, also must stand together to affirm their right to remain in the region, to profess their faith, to be safe and to contribute to society.

Ongoing tensions between the Israelis and Palestinians “continue to create insecurity, the restriction of fundamental rights, and the flight of many people from their land,” Pope Francis said. “I invoke God’s help in this, and I ask all those involved to intensify their efforts to achieve a stable peace based on justice and recognition of the rights of all.”

Although he did not specifically mention recent acts of vandalism at Christian churches, Pope Francis insisted “any kind of violence, discrimination or displays of intolerance against Jewish, Christian and Muslim worshippers, or places of worship, must be firmly rejected.”

Jerusalem, a city sacred to Jews, Christians and Muslims, “ought to be a place where all can live together peaceably,” he said. “Otherwise, the endless spiral of suffering will continue for all.”

NEXT: In Caribbean, church agencies help as process of rebuilding begins