Iraqi-Kurdish war could be deadly for Christians, warns U.S. adviser 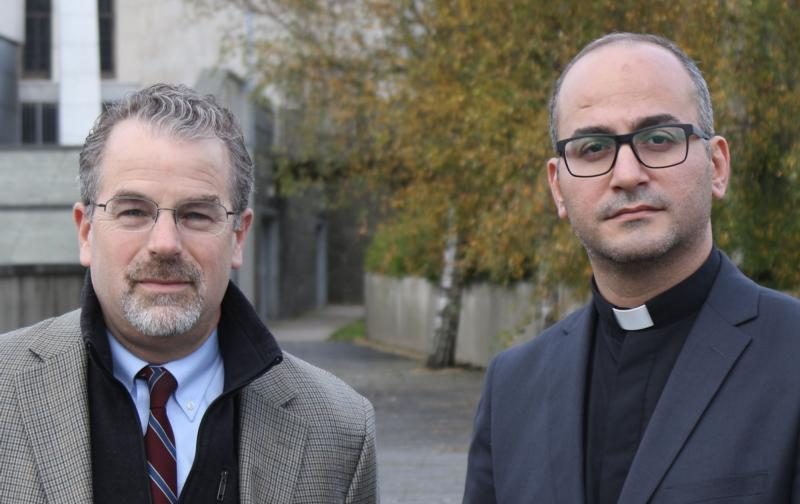 Stephen Rasche, the U.S. lawyer who serves the archbishop of Irbil, Iraq, as coordinator for the return of Christian refugees, and Father Sala Kajo, who oversees resettlement of Christian refugees to the Iraqi village of Teleskeof, are pictured outside the Cathedral of Christ the King in Liverpool, England, Oct. 10. (CNS photo/Simon Caldwell)

LIVERPOOL, England (CNS) — Two millennia of Christianity in Iraq could be wiped out completely if war breaks out between Iraqi forces and Kurdish nationalists, warned a U.S. adviser to the Chaldean Catholic Church.

Stephen Rasche said the international community must act quickly to prevent a new conflict in Iraq following the Sept. 25 referendum in Iraqi Kurdistan, where 93 percent of 3.3 million voters chose independence.

The poll triggered a hostile reaction from the Iraqi government, which immediately halted flights over Kurdish air space and stopped recognizing visas issued by the Kurdistan Regional Government.

Rasche said unless tensions between Baghdad and Irbil are defused, Christian refugees returning to towns on the Ninevah Plain could find themselves in the midst of a “greater war” than that fought against Islamic State.

If the refugees were unable to resettle because of a new conflict, then “Christianity in Ninevah is gone,” he said.

“It will disappear after 2,000 years if we do not rebuild now,” said Rasche, 57, a Catholic lawyer from Boston who acts as director of resettlement programs for the Chaldean Catholic Archdiocese of Irbil in the Kurdistan region of Iraq.

“Archbishop Bashar Warda of Irbil has said repeatedly over the last year that what comes after ISIS could be even more dangerous to the Christians than what came during ISIS,” he said.

“The biggest and most important thing the international community could do right now is prevent a war,” Rasche continued, adding that “intense diplomatic pressure” needed to be exerted on the two sides now to prevent a conflict.

Western nations, he said, have “the ability to do that if they use all the tools at their disposal — they have the ability to prevent war.”

Christians have lived in Iraq since the time of the apostles, but their number has plunged from 1.5 million to just 250,000 in the past 14 years. Most of them were living in the towns and cities of the Kurdish-controlled Ninevah Plain until it was overrun by Islamic State in 2014.

This year they began to return from refugee camps to rebuild their settlements after liberation by Iraqi and Kurdish forces.

The Ninevah Plain, however, is now “ground zero for the disputed territories between the Kurdish regional government and Baghdad,” said Rasche.

“Right now, there is a de facto dividing line between the Iraqi sector and the Kurdish sector that goes right down the middle of Christian Ninevah,” he added. “It is a specific request of the Christian churches in this north Iraq region that, in any dialogue or any settlement, that the resulting area of Christian Ninevah remains unified and not split.”

His comments came days after five Catholic and Orthodox bishops issued a joint statement appealing to the international community to protect the Christians of Ninevah.

“We cannot hide our concern that the situation for the Christians has become very difficult and leads to uncertainty,” said the statement. “It is a clear fact that this situation has created in Christians a state of fear and concern about the possibility that the struggle may develop into a crisis that will have far-reaching repercussions for all.”

“Care should be made not to involve the last remaining Christian land in political bargaining, as our vulnerable community cannot withstand further schism and division in addition to the ongoing political and sectarian fights,” they added.

“It is the last chance for us,” said Father Kajo, vicar general of the Diocese of Alqosh.

He added that none of the Western aid money channeled through the United Nations to help to resettle religious minorities dislocated by Islamic State had reached the Christians in the region.

“There have been reports in the media that they have given us millions of dollars, but we have received nothing,” he said.

Resettlement projects were being funded only by private donations and a grant of $2 million paid directly to the church by the Hungarian government, he said.

NEXT: Death penalty is ‘contrary to the Gospel,’ pope says