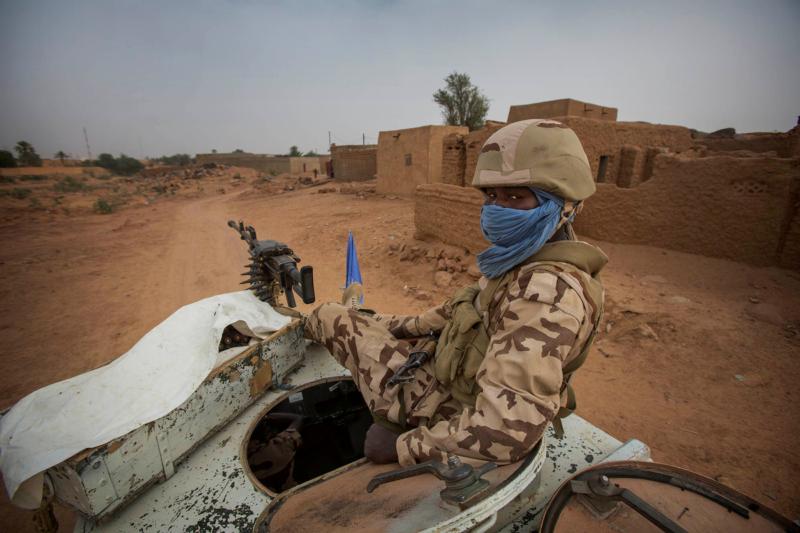 A member of the United Nations Multidimensional Integrated Stabilization Mission in Mali patrols in mid-December in Kidal. Catholic leaders in Mali warned that parishes face a growing assault by Islamic militants despite attempts to enforce a peace deal in the north African country.(CNS photo/Sylvain Liechti handout via Reuters)

OXFORD, England (CNS) — Catholic leaders in Mali warned that parishes face a growing assault by Islamic militants despite attempts to enforce a peace deal in the north African country.

“Our churches and chapels are now being targeted by extremists, who’ve told Christians not to gather to pray,” said Msgr. Edmond Dembele, secretary-general of the Malian bishops’ conference.

“The authorities are trying to reimpose control, and we may learn more about what kind of strategy is being followed,” he told Catholic News Service Oct. 5. “But we’re also alarmed the attacks are being mounted by isolated Islamist groups, acting in their own name.”

Tensions were running high in September and early October in Mali’s central Mopti region after several Catholic churches were ransacked and torched, forcing parishioners to flee.

Msgr. Dembele said it was unclear which groups were involved and what their motives were.

“We have no security program of our own and we rely on the authorities to provide protection and find solutions,” Msgr. Dembele said.

“On previous occasions, the government has deployed military units in our parishes. But this still hasn’t been done against these new attacks.”

The attacks occurred as the Malian government is attempting to implement the 2015 peace deal with rebel fighters. The agreement called for the rebels to be integrated into the national arm.

Under a 2015 peace deal with the government of President Ibrahim Boubacar Keita, rebel fighters are to be integrated into the national army.

However, attacks by Touareg separatists and Islamist insurgents have continued, delaying the return of displaced Malians from neighboring Niger, Mauritania and Burkina Faso. Rights groups have reported summary executions and the destruction of schools and forced recruitment of child soldiers.

Msgr. Dembele said armed men had smashed their way into a church at Dobara, 500 miles north of the capital Bamako, in late September, throwing out crosses, altar furnishings and a statue of Mary, which they burned outside. Assailants also drove Catholics out of a church at Bodwal, warning they would be killed if “seen praying in the church,” he said.

Local parishioners were currently “very afraid but not panicking,” the priest said, as they “urgently awaited” help from government and U.N. forces seeking to restore order.

“Christians aren’t the only ones threatened and attacked. Mali’s whole population is being victimized, Muslims included,” Msgr. Dembele said.

The church official also said he and others remained confident the peace deal would succeed.

“We know there’s been some prevarication,” he said, “and while this isn’t necessarily the fault of the state or any particular group, it’s made the situation more difficult.”

PREVIOUS: Facebook, Microsoft try to keep up with vast scale of online abuse

NEXT: Pope to honor fallen soldiers at American cemetery near Rome