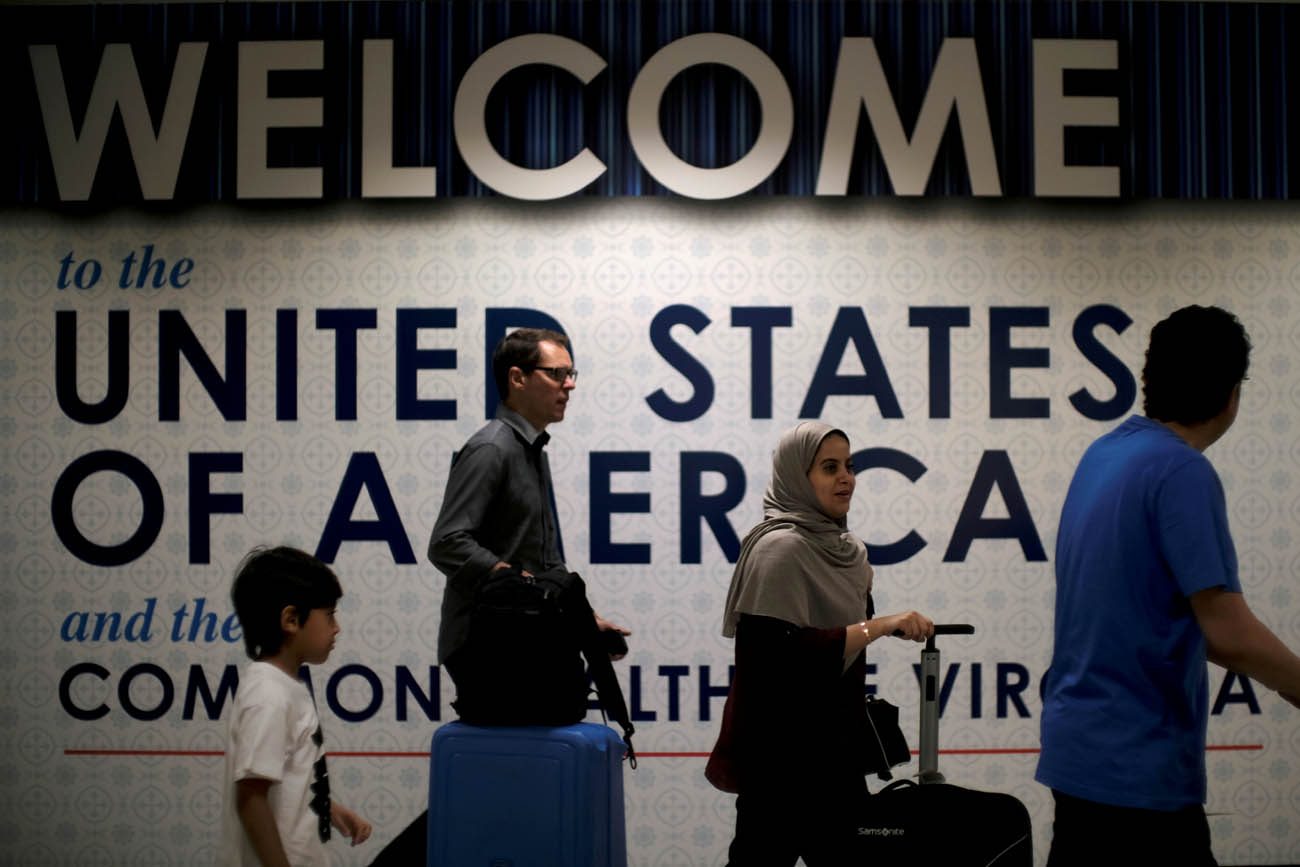 International passengers arrive at Dulles International Airport in Dulles, Va., June 26. Pope Francis called on the people of the United States to welcome migrants during a live video conversation Oct. 26 with teens from around the world. (CNS photo/James Lawler Duggan, Reuters)

ROME (CNS) — Pope Francis called on the people of the United States to welcome migrants and urged those who are welcomed to respect the laws of the country.

“To all people (of the U.S.) I ask: take care of the migrant who is a promise of life for the future. To migrants: take care of the country that welcomes you; accept and respect its laws and walk together along that path of love,” the pope said Oct. 26 during a live video conversation with teenagers from around the world.

Pope Francis was speaking with teens participating in a program of the international network of “Scholas Occurrentes.”

At the event, broadcast by the U.S. Spanish-language network Telemundo, the host asked the pope for a message to immigrants in the United States.

Many face difficulties after the Trump administration’s recent call to tighten immigration laws, by raising the standard of proof for asylum seekers and limiting family members of current immigrants who can enter the country.

Other proposals include: constructing a wall on the southern border; cracking down on the entry of young Central Americans; criminalizing the overstay of a visa as a misdemeanor; and restricting federal grants to so-called sanctuary cities.

Pope Francis said the U.S. bishops “have told me about what you suffer” and is aware that “there are people that do not want you.”

“I am a son of immigrants. And if there weren’t people who helped my father when he arrived at 22 years old, I would not be here today,” the pope said.

The call to welcome the migrant and the stranger, he added, is not a personal request he made as pope but a mandate given “by someone much more important than myself.”

“God said it and the Bible is clear,” the pope said. “Receive the migrant, receive the refugee, because you too were a migrant and refugee from Egypt. Jesus was also a refugee; they wanted to cut the little child’s head off.”

While video chatting with students from Houston, the pope also was asked by the host of the event if he had a message for immigrant youths in the United States known as “Dreamers.”

Approximately 800,000 young men and women who have benefited from the Obama-era Deferred Action for Childhood Arrivals program, or DACA, are at risk of losing their legal status.

President Donald Trump has said that in any bill to legalize DACA, Congress must include funding for a U.S-Mexico border wall and more Border Patrol agents — as laid out in his policy proposals — or he won’t sign such a measure.

The pope told the Dreamers, “The first thing I want to say is that I’m praying for you and I am close to you. Secondly, continue dreaming. And lastly, be close to people who can help you and defend you at this juncture. Do not hate anyone; look for help from those who can defend you. I am praying for you.”

Pope Francis also urged Europeans to welcome migrants and refugees who arrive on the continent seeking a better life, and he reminded Europeans that they are also “mestizos” (“mixed race”) from “the great migrations of the barbarians and the Vikings.”

“This isn’t the time to pretend this is sterilized laboratory,” the pope said. “This is the moment to receive, to embrace and — to those who arrive — to respect the rules of the country that welcomes you.”

“To the migrants who suffer,” the pope added, “know that the pope is very close to you. I accompany you and I am praying for you.”

NEXT: Not a Roman holiday: Pilgrims learn lessons walking to Rome