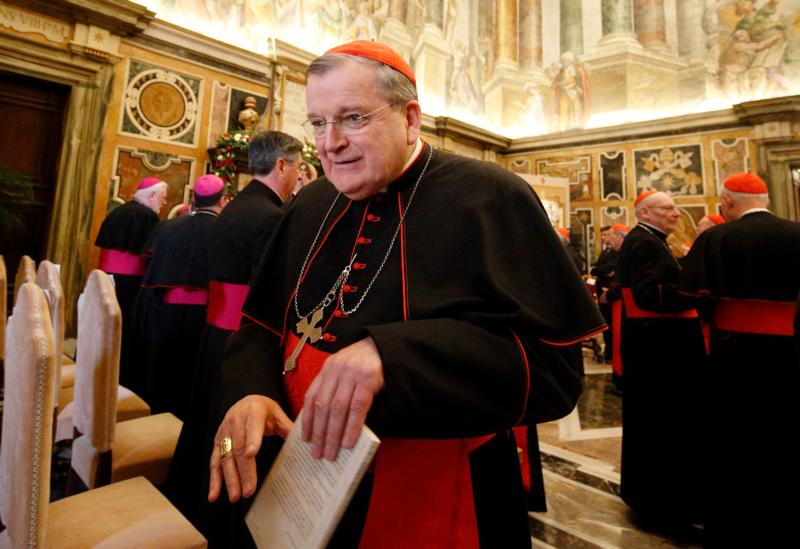 Pope Francis has named U.S. Cardinal Raymond L. Burke a member of the Apostolic Signature, the church’s highest court, which the cardinal headed from 2008-2014. Cardinal Burke is pictured leaving a papal audience to exchange Christmas greetings with members of the Roman Curia at the Vatican in this Dec. 22, 2016, file photo. (CNS photo/Paul Haring)

VATICAN CITY (CNS) — Pope Francis has named U.S. Cardinal Raymond L. Burke a member of the Apostolic Signature, the church’s supreme court, which the cardinal headed as prefect from 2008 to 2014.

Members of the Apostolic Signature serve as judges in the cases, which mainly involve appeals of lower-court decisions or of administrative decisions by other offices of the Holy See.

The appeals involve everything from challenges to the decisions of marriage tribunals to recourse against the dismissal of a religious, the transfer of a parish priest, the restriction of a priest’s ministry, removal of ministerial faculties, renovation of a parish church and dismissal from a teaching position.a

Cardinal Burke’s nomination was met with surprise in some quarters because he continues to speak publicly about issuing a formal “fraternal correction” of Pope Francis over the pope’s teaching in “Amoris Laetitia,” his exhortation on the family. But the public criticism of the pope did not prevent Pope Francis in late 2016 from naming Cardinal Burke the presiding judge in a church trial investigating allegations of sexual abuse leveled against Archbishop Anthony S. Apuron of Agana, Guam. The results of the investigation and trial have not been announced.

The pope’s nomination of Cardinal Burke, 69, was announced at the Vatican Sept. 30. Also named to the Apostolic Signature were Cardinals Agostino Vallini, the retired papal vicar of Rome, and Edoardo Menichelli, retired archbishop of Ancona, Italy. Cardinal Vallini was prefect of the court from 2004 to 2008; as a priest, Cardinal Menichelli had worked at the Apostolic Signature for more than 20 years. Two others also were named members: Belgian Archbishop Frans Daneels, who retired as secretary of the court in 2016; and Auxiliary Bishop Johannes Willibrordus Maria Hendriks of Haarlem-Amsterdam, a canon lawyer.