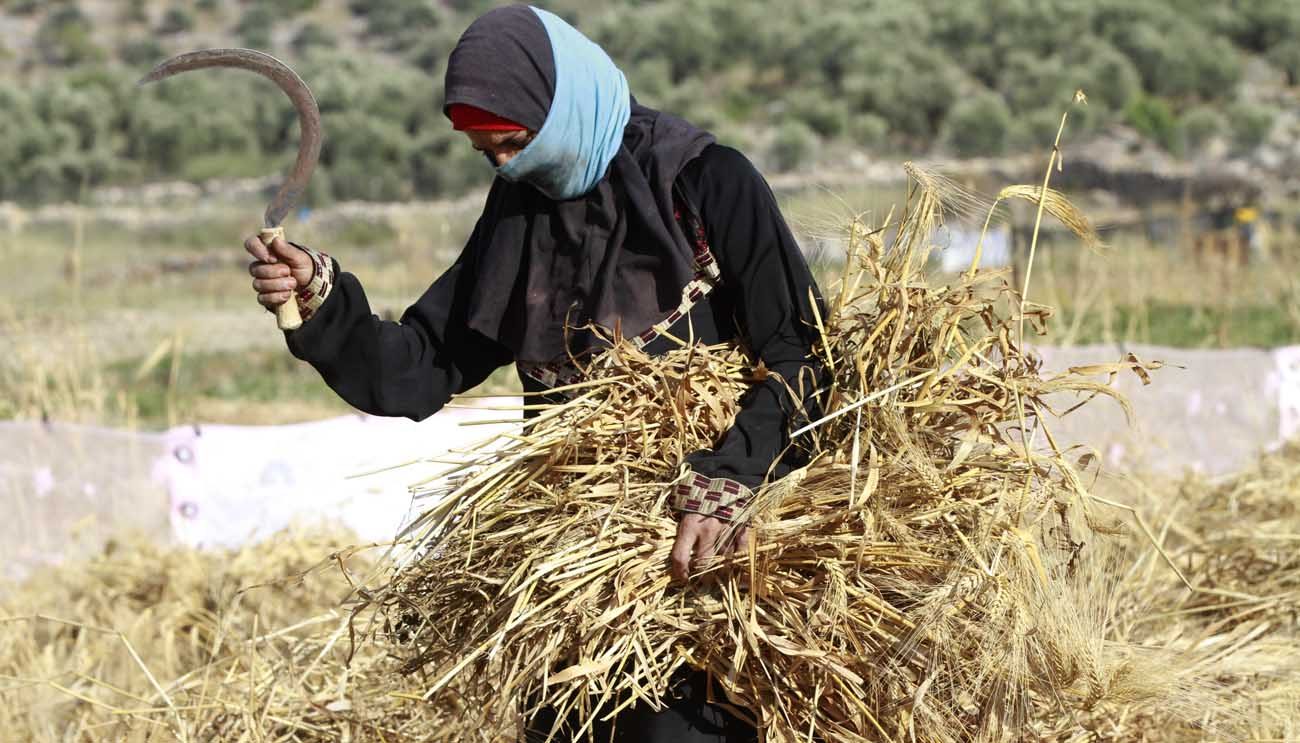 A Palestinian woman harvests wheat by hand on a farm near Salfit, West Bank, in 2016. Education is essential in enabling women in every country "to become dignified agents of their own development," said Archbishop Bernardito Auza, the Vatican's permanent observer to the United Nations Oct. 6 at U.N. headquarters in New York. (CNS photo/Alaa Badrneh, EPA)

UNITED NATIONS (CNS) — Conditions in many parts of the world force women and girls to bear the burden of carrying out everyday chores for their families and communities, keeping many of them from getting even a basic education, the Vatican’s U.N. nuncio said Oct. 6.

Females are often the victims of sexual and other violence, which prevents them from improving life for themselves and their families, said Archbishop Bernardito Auza, the Vatican’s permanent observer to the United Nations. Migrant women and girls are particularly vulnerable to these situations, he added.

He addressed the issue of women’s advancement during a session at the United Nations of the Third Committee, which focuses on social, humanitarian and cultural issues.

“Young women in rural areas are disproportionately involved in unpaid domestic work and especially bear the greatest burden when access to clean water and sanitation is not readily available,” Archbishop Auza said. “They are forced to spend considerable time and effort collecting water for the community, and in doing so, their access to basic education is often thwarted, not to mention that, in many isolated places, they are also exposed to risks of violence.”

Failure to achieve “that basic human right” of universal access to safe drinkable water “can undermine other human rights, as it is a prerequisite for their realization,” he said.

Pope Francis in his encyclical “Laudato Si'” points to “the abandonment and neglect … experienced by some rural populations which lack access to essential services,” Archbishop Auza said, quoting the document. In many areas, the pope noted, “some workers are reduced to conditions of servitude, without rights or even the hope of a more dignified life.”

Women and girls often bear “the heaviest burden from these deprivations,” the archbishop said.

Regarding education, “significant progress has been made toward parity between boys and girls from families of relative wealth or decent economic standing,” the archbishop said, but women and girls who live in poverty lack schooling, literacy skills and opportunities for adult education.

Adolescent girls “are at the greatest risk of exclusion from education due to social and economic hardships,” Archbishop Auza said. “Whenever young women and girls do not have access to education, they are hindered from becoming dignified agents of their own development.”

To change this reality, the “basic material needs of every school-age girl living in rural areas must be addressed,” Archbishop Auza said. One initiative that has “proven efficient,” he said, is providing school meals to reduce girls’ absenteeism. Such efforts should be encouraged “to guarantee access to education to each and every girl,” he added.

A current partnership between local farmers, including women, and the World Food Program of the United Nations to provide “homegrown school meals” in 37 countries is “a hopeful example,” Archbishop Auza said. The effort “attends to the needs of girls and boys, fosters education and increases market access for women, all at the same time,” he said.

Based in Rome, the World Food Program is the world’s largest humanitarian organization addressing hunger and promoting food security. It provides food aid to an average of 80 million people in 76 countries each year.

Addressing the violence women and girls face, Archbishop Auza again quoted Pope Francis in saying that eliminating violence is impossible “until exclusion and inequality in society and between peoples are reversed.”

“Through poverty and exclusion, adolescent girls, especially those in rural areas, also experience heightened vulnerability to sexual exploitation, child marriage and other unacceptable forms of violence,” the archbishop said. “The horrifying prevalence of violence against women, thus, remains a salient and sad example of the deep connection between economic exclusion and violence.”

Archbishop Auza also discussed the current global migration crisis and its effect on migrant women and girls in particular, reminding the global community it has a responsibility “to welcome, to protect, to promote and to integrate” migrants and refugees.

“Millions of women and girls are fleeing violent conflicts or extreme poverty only to find themselves exploited by traffickers and manipulators along perilous routes and even in host communities,” the archbishop said.

The Vatican’s U.N. delegation, he said, “strongly supports the international community in its efforts to raise awareness and take concrete steps to prevent the abhorrent phenomenon of violence perpetrated against migrant women and girls.”

He said the Vatican “remains strongly committed” to endeavors aimed “at truly protecting women’s dignity, while promoting their integral development and advancement within the family and society.”

NEXT: Vatican releases pope’s schedule for visit to Myanmar, Bangladesh