Reformation at 500: Christians see they are brothers, sisters, pope says 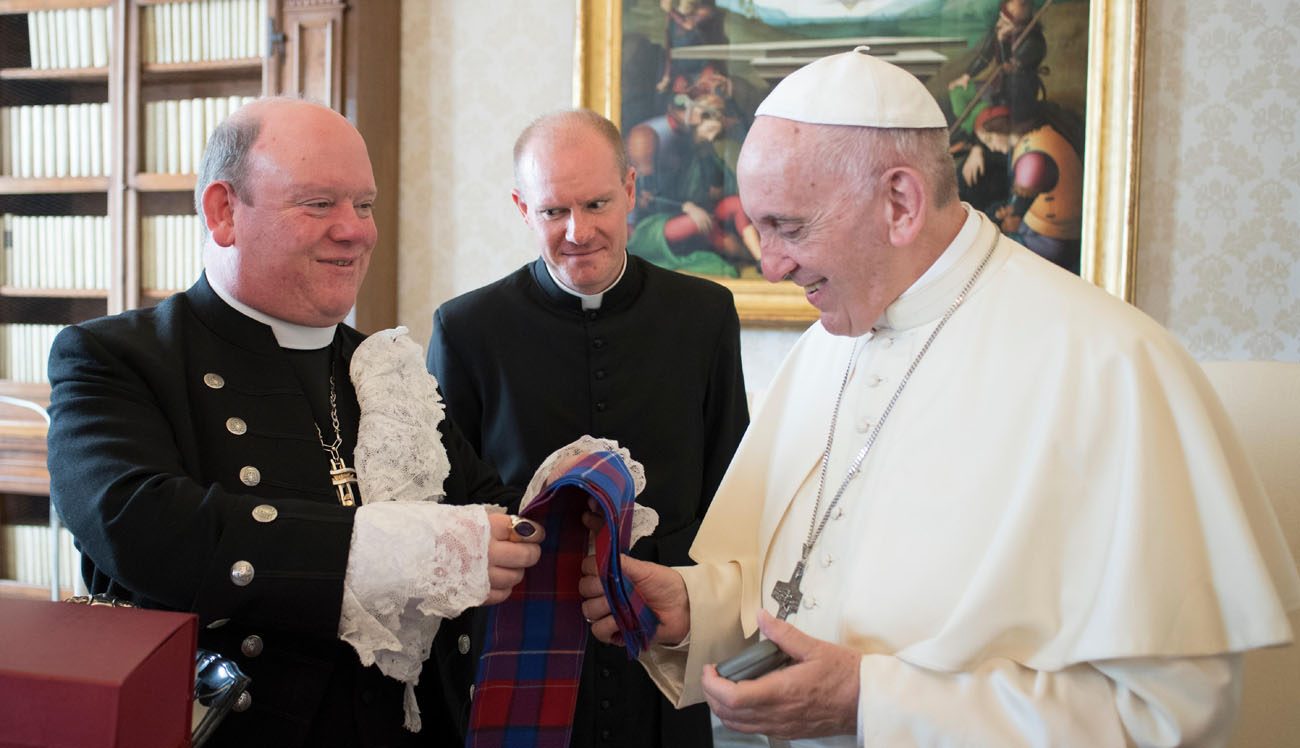 Pope Francis accepts a gift from the Rev. Derek Browning, moderator of the general assembly of the Church of Scotland, during an audience at the Vatican Oct. 26. (CNS photo/L'Osservatore Romano)

VATICAN CITY (CNS) — The grace of God and decades of ecumenical dialogue have enabled Catholics and Protestants to mark the 500th anniversary of the Reformation together, emphasizing their shared baptism and faith in Jesus, Pope Francis said.

Welcoming the moderator and a delegation from the Church of Scotland, a Presbyterian church, the pope said, “Let us thank the Lord for the great gift of being able to live this year in true fraternity, no longer as adversaries, after long centuries of estrangement and conflict.”

The pope met the Church of Scotland delegation at the Vatican Oct. 26, just four days before Reformation Sunday, which was to mark the 500th anniversary of Martin Luther posting his 95 theses on the door of the Wittenberg Castle church. Posting the theses, formally called the “Disputation on the Power and Efficacy of Indulgences,” sparked the Protestant Reformation.

Marking the anniversary together, Pope Francis said, “has been possible, with God’s grace, by the ecumenical journey that has enabled us to grow in mutual understanding, trust and cooperation.”

“The past cannot be changed, yet today we at last see one another as God sees us,” he said. “We are first and foremost his children, reborn in Christ through one baptism, and therefore brothers and sisters. For so long, we regarded one another from afar, all too humanly, harboring suspicion, dwelling on differences and errors, and with hearts intent on recrimination for past wrongs.”

Now, he said, Catholics and Protestants are “pursuing the path of humble charity that leads to overcoming division and healing wounds,” are working together to serve the poor and promote justice, and are standing together to defend the rights of Christians undergoing persecution.

The Rev. Derek Browning, moderator of the Church of Scotland, told the pope that wise people “tell us we must speak the truth in love, but in the first place we must speak together. And so, not only in our words, but also in our actions, may truth and light and love be the things we exchange with each other.”

He also told the pope, “we are celebrating 50 years of the ordination of women within the Church of Scotland next year,” and the church has had women deacons for almost 130 years. “We note with interest the work that you will be doing with a commission looking into the New Testament” descriptions of women deacons.

In 2016, Pope Francis named 12 scholars — six women and six men — to a commission to study the ministry of women deacons in the early church.

Before inviting the Church of Scotland delegation to pray the Lord’s Prayer with him, Pope Francis talked about the importance of Christians recognizing how much they need each other.

NEXT: Pope says space station crew like a ‘tiny U.N.’ with peaceful diversity