Tolerance only way to ensure survival of church in China, Jesuit says 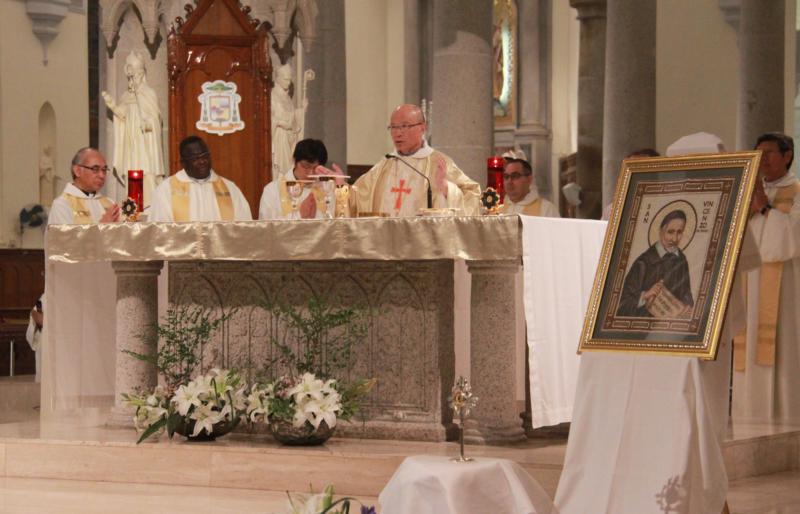 Bishop Michael Yeung Ming-cheung of Hong Kong celebrates Mass Sept. 27, the feast of St. Vincent de Paul, at the Cathedral of the Immaculate Conception. St. Vincent de Paul is the patron saint of all works of charity. (CNS photo/Francis Wong)

VATICAN CITY (CNS) — China is a communist nation and there is little chance that will change soon, so in order to survive, the Catholic Church must be realistic and seek a stance of mutual tolerance with the government, said a 90-year-old Chinese Jesuit priest.

“I’m an optimist, above all because I believe in God. God is the Lord of human history. Whatever way human history proceeds, it never becomes unconnected from the salvific plan of God,” said Jesuit Father Joseph Shih, who returned to Shanghai 10 years ago after teaching for more than three decades at Rome’s Pontifical Gregorian University.

The priest now lives in Zikawei, a formerly Christian village outside of Shanghai. The town has become a commercial center, but the Church of St. Ignatius remains. Each weekend, there are seven Masses, he said, and the church “is always full.”

In a long interview with La Civilta Cattolica, the Jesuit journal reviewed at the Vatican prior to publication, Father Shih pleaded with outsiders to stop describing Catholicism in China as consisting of two churches, one that accepts government control and the other that doesn’t and so exists clandestinely.

“Catholics who live in China are aware of these definitions, but they know how to distinguish between the religious politics of the government and their own faith,” he said. “For them, in China there is only one church: the one, holy, Catholic and apostolic church.”

But “unscrupulously” making the most of the differences in an attempt to impede dialogue between the Vatican and the Chinese government “is unhelpful for the life and mission of the church in China,” he said.

“The Chinese government is communist. This is something that won’t change for a long time,” he said. But to exist, the church in China must have some kind of relationship to the government.

“What relation? Opposition? That would be suicidal,” he said. “Compromise? No, for it would mean the church loses her own identity. So the only possible relation is that of reciprocal tolerance.”

Father Shih insisted “tolerance is not the same as compromise. Compromise gives something away to the other, up to a level that the other finds satisfying,” whereas “tolerance gives nothing away, nor does it require that the other give way.”

Father Shih said the hardened positions over relations with the Chinese government and its devastating impact on individuals can be seen in the case of Shanghai Auxiliary Bishop Thaddeus Ma Daqin.

Unusually, his appointment was approved both by the government and by Pope Benedict XVI. But at his ordination in 2012, Bishop Ma announced he would no longer hold any position in the Catholic Patriot Association. He was immediately placed under house arrest and the government rescinded his appointment.

The Western media spoke of “betrayal,” Father Shih said. “I know Bishop Ma Daqin very well. He has not changed direction, nor has he surrendered; I think rather that he has ‘reawakened.’

“You see, many people say that they love China, but they have an abstract idea of the country,” Father Shih said. Bishop Ma loves “the real China, today’s China, the China governed by the Communist Party. So he no longer believes that the church has to necessarily oppose the Chinese government.”

“Even if he is currently under house arrest, he is trying to engage positively with his government,” Father Shih said. “I hope the Holy See will sustain him and allow him to continue trying.”

NEXT: Eliminating any difference between sexes ‘is not right,’ pope says