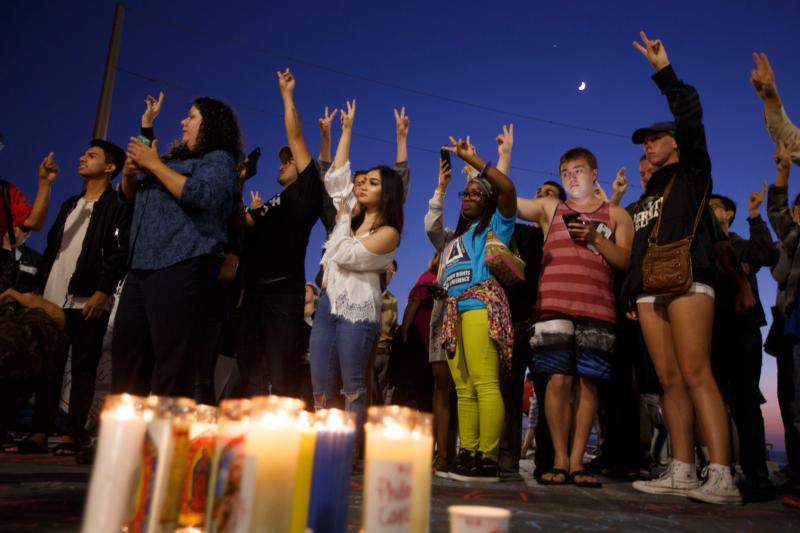 Protesters raise their hands and make the peace sign after a string of nationwide police shootings of African-Americans and the slaying of police officers in Dallas during a 2016 candlelight vigil in Huntington Beach, Calif. (CNS photo/Eugene Garcia, EPA)

UNITED NATIONS (CNS) — Genuine intercultural and interreligious dialogue is based on personal, practical encounters that acknowledge and respect the deeply held beliefs of others, according to speakers at an Oct. 13 United Nations panel.

The permanent observer mission of the Holy See to the United Nations and the Catholic lay movement Communion and Liberation co-sponsored a lively two-hour exchange among diplomats, academics, religious leaders and representatives of nongovernmental organizations.

They addressed a complex topic: “The ‘other’ is a good for me: the role of interreligious and intercultural dialogue in addressing violence, conflict and building a lasting peace in the world today.”

Unprecedented global interconnectedness coexists with divisive conflicts of identity, culture, religion and politics, moderator Paulo Carozzo said. He is director of the Helen Kellogg Institute for International Studies at the University of Notre Dame in Indiana.

The international call for greater dialogue as a solution to crises in Syria, Iraq, Central African Republic, North Korea, Venezuela and other places “is countered by threats of increased force and even nuclear assault,” Carozzo said.

Archbishop Bernardito Auza, the Holy See’s permanent observer to the United Nations, said: “Dialogue is not just an exchange of words or ideas or position papers. It’s an exchange of persons who speak and think, and often differently.”

Some dialogues among persons of different faiths and cultures in the past 50 years have scarcely risen above the level of monologue, he said. “Genuine dialogue presupposes that each side wishes to know each other and desires to increase and deepen its knowledge of each other.”

Archbishop Auza said sincere interpersonal dialogue “must acknowledge with respect each interlocutor’s beliefs and the culture that flows from those beliefs. True dialogue happens in appreciation for each other’s intimate convictions.”

“Believers, in particular, can sometimes fail to appreciate the extraordinary virtue found in those of other religions, like the dedication to prayer, the sincerity of compassion and charity toward the unfortunate, the living by conscience even at the point of suffering, as well as the person’s humility, goodness, hospitality, courage and other good qualities,” he said.

For dialogue to foster the common good, “it must be driven by the conviction that the ‘other’ is “a good both in himself or herself, but also good for me and the world,” the archbishop said. “The other is not a threat … a competitor in an unending battle of survival of the fittest. The other is not an evil to be marginalized or eliminated. The other is an objective and subjective good.”

Father Julian Carron, a priest from Spain who is president of Communion and Liberation, a Catholic lay movement, said that for dialogue to be effective, it “dialogue must be more than tolerance of another’s views.”

“Dialogue must be a place where we encounter the other and where our personal experience is perceived as a good, as something necessary for each of us to better understand ourselves and the problems we face together,” he said.

“Moral wrestling is a lifelong pursuit, not a one-time event,” he said.

Etzioni said dialogues that incorporate a shared moral understanding, such as global stewardship of the earth, are not always implemented, but they establish a norm for conversation and acceptable behavior.

Ambassador Teodoro Locsin Jr. of the Philippines said interreligious dialogue assumes the authenticity of the participants. “Religion offers shape and direction to human life, it does not confuse or dehumanize,” he said.

Locsin said every great religion starts with the encounter between a person and “whatever he thinks is out there or inside him.”

Those who find a religious answer should regard their fellow man of the same or another faith or none at all “as one like himself: a person filled with a fearful wonder whom he must treat as he would himself.”

Friendship is the fastest way for everyone to appreciate the likeness of the human condition, he said.

Ambassador Ina H. Krisnamurthi, deputy permanent representative of Indonesia, said religion can be used to justify or exacerbate conflicts. Yet, people who have direct experience of how interfaith and intercultural dialogue works in their daily lives can help stop the spread of negative forces, she said.

“Practical and on-the-ground actions help to renew people’s spirit and faith to take action and counter the negative forces that affect them,” she said.

The topic for the event was based on a subtitle of Father Carron’s recent book, “Disarming Beauty.”

The priest was in New York as part of an Oct. 9-15 tour of the United States. The tour began at the University of Notre Dame, and included stops in Denver, Houston, Montreal and the U.N. headquarters.

His final talk was Oct. 15 at Jesuit-run Georgetown University in Washington, where he was on a panel with Archbishop Christophe Pierre, the apostolic nuncio to the United States. Moderated by John Carr, director of the Initiative on Catholic Social Thought and Public Life at Georgetown, the discussion focused on the life and contribution of the Catholic Church in the time of Pope Francis.

NEXT: Pope on interviews: Church must listen, respond to people’s questions