Spirituality of humble priest, one step from sainthood, apt for today 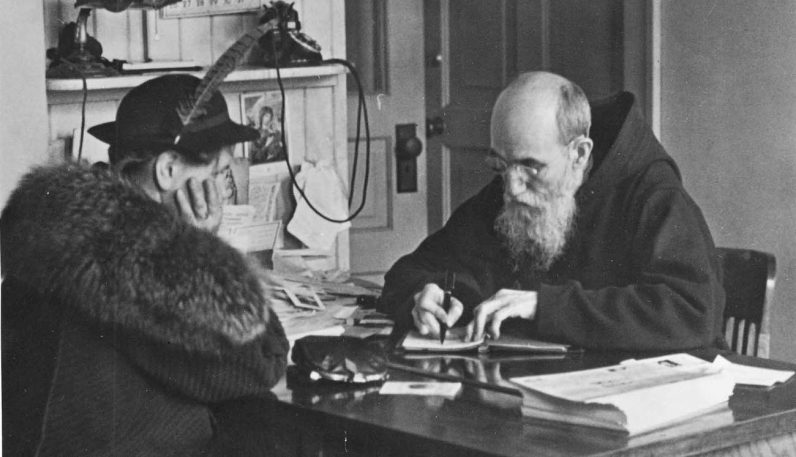 Father Solanus Casey, who will be beatified Nov. 18, records a note from a woman who visited him at St. Bonaventure Monastery in Detroit in 1941. The Capuchin Franciscan friar kept dozens of notebooks filled with prayer requests and favors from the thousands who visited him each year. (CNS photo/Archdiocese of Detroit)

The saintly American priest Father Solanus Casey, who during his life was a humble friar, will soon be beatified, the final step before canonization. The joyful ceremony will take place Nov. 18 at Detroit’s Ford Stadium before a capacity gathering expected to exceed 70,000.

This is an extraordinary honor for a man who in life never aspired to great deeds but was content to fulfill the humblest tasks assigned to him.

The Capuchin Franciscans are an order that can count more than 150 saints and blesseds along with distinguished prelates including Philadelphia’s Archbishop Charles Chaput and Boston’s Cardinal Sean O’Malley. Now unassuming Solanus Casey takes his place among the Capuchin heroes.

Other ceremonies will be held throughout the world wherever Capuchins are missioned. 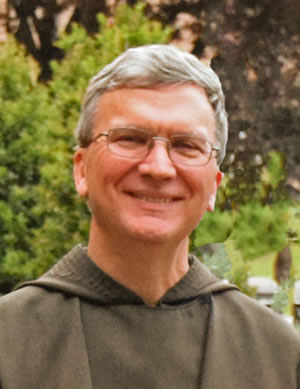 Here in Philadelphia Father Thomas Betz, the provincial minister of the Capuchins’ Pittsburgh-based St. Augustine Province, will celebrate a Mass of Thanksgiving for the beatification of Father Solanus on Friday, Dec. 1 at 5:15 p.m. at St. John the Evangelist Church, 21 South 13th Street in center city.

Born Francis Casey in 1870 in Oak Grove, Wisconsin to a large Irish immigrant family, Father Solanus had little formal schooling. As a teen and young adult he worked various jobs including as a prison guard.

But feeling a call to the priesthood, he eventually entered a minor seminary in Milwaukee. Possibly because of his earlier lack of education and in a seminary where classes were taught in Latin or German, neither of which he understood well, he did poorly in his studies especially in theology.

Because of this the seminary officials felt he could not perform the duties of a parish priest and recommended he try a religious order instead. He chose a branch of the Franciscans, the Order of Friars Minor Capuchin, where he entered in 1897 and was given the name Solanus, the name of an earlier Capuchin saint.

Father Solanus was ordained in 1904 but there was a catch. Because of the difficulties in his studies he was ordained as a “simplex” priest, a rarely used designation. This meant he could indeed celebrate Eucharist but was not permitted to preach or hear confessions.

As a practical matter he was equivalent to a lay brother, assigned to the lowliest tasks but nevertheless able to celebrate Mass at least privately.

Cleary at this point his superiors saw something special in Friar Solanus, in that they permitted his ordination despite academic difficulties. If the restrictions on his ministry bothered him, it never showed.

Over the years he worked in Manhattan and Harlem in New York, as well as 20 years in Detroit and for a time in Huntington, Indiana.

He was the friar who answered the door when people came with prayer petitions, and he visited the sick and served food at a huge soup kitchen. His reputation for holiness and a sympathetic ear, as well as for being a man whose prayers of petition seemed to be answered, continued to grow.

When he died in Detroit in 1957 an estimated 20,000 people came from all over to his viewing or funeral. One of the key conditions for a cause for beatification or canonization is the existence of a “cult,” that is, a body of people who are convinced the person, in this instance Father Solanus, was indeed saintly. That belief existed then and still persists.

“He was known for miracles,” Father Betz said in an interview with CatholicPhilly.com. “When people came to the door asking for prayers, they were surprised by how often the prayers were answered.” 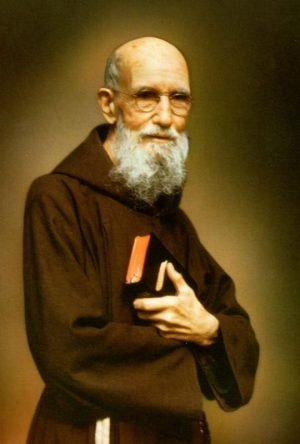 The sainthood cause of Wisconsin-born Father Solanus Casey (1870-1957), a Capuchin priest and doorkeeper at Franciscan friaries in New York and Detroit, has advanced to the beatification stage after Pope Francis approved a miracle attributed to his intercession. Father Casey is pictured in an undated image. (CNS photo)

Although Father Solanus was prevented from performing some of the usual ministries of the priesthood, “instead of lamenting what he could have done, he said, ‘What I can do I will do with all of my heart,’” Father Betz observed.

“That is an example for me,” he said. “He is a role model of humble uncomplaining service and that is a real blessing. With all of the restrictions placed on him he worked within restrictions and did everything he could to build up the church.”

Father Betz likens Father Solanus to the Little Flower, St. Therese. “He would have liked to go to the missions and he couldn’t. When people came to the door he would enroll them in the mission society. I think he affected more people than 10 priests in a more active ministry.”

For Father Betz, coming back to celebrate the Mass for the beatification of Blessed Solanus is a bit of a homecoming. He served for years in immigration work, vocation ministry and the Chinese apostolate in Philadelphia and lived for a time at St. John the Evangelist where the Blessed Solanus Casey Mass will be celebrated.

St. John’s Hospice, which was founded by a former pastor of St. John the Evangelist, is a smaller version of the soup kitchen in Detroit where Father Solanus spent many years of his career.

Blessed Solanus Casey was never missioned to Philadelphia but he would have loved that ministry.

NEXT: 2017-2016 Audited Financial Statements of the Archdiocese of Philadelphia