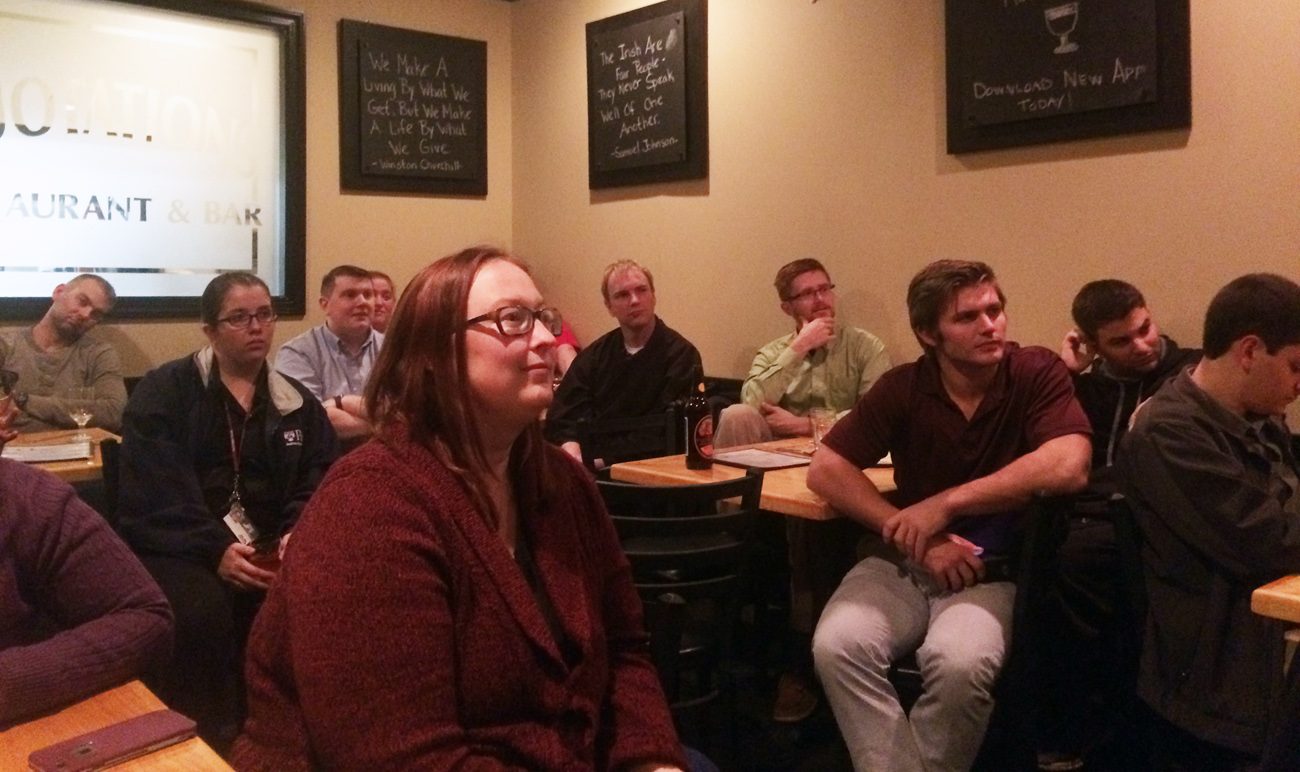 The young adult group of Nativity B.V.M. Parish in Media hosted the Theology on Tap discussion event, “Science and the Catholic Church” Nov. 16 at Quotations in Media.

Theology on Tap, a casual discussion series for young adults in their 20s and 30s led by the group from Nativity B.V.M. Parish in Media, came to Quotations, a nearby restaurant on Nov. 16 to discuss “Science and the Catholic Church.” Alex Sailsman, an MIT graduate in materials science and engineering, was the guest speaker as the group explored the deep link between faith and science.

“Our goal for this year is to cover topics which will empower Catholics to evangelize, even in an environment that is hostile to religion,” said Chiara Cardone, coordinator of Youth and Young Adult Ministries at Nativity B.V.M. Parish.

Several members of the parish’s young adult group are professionals in the STEM field and that played a role in choosing this particular subject.

“This is a hot topic,” said Olivia Batdorf, a member of St. Patrick Parish in Philadelphia. “We can all relate to it because we all have issues.”

About two dozen young adults gathered for the talk and that included guests from Reformation Lutheran Church as well as Father Tom Whittingham, pastor of St. Katharine Drexel Parish in Chester, who began the evening with a prayer remembering the faithful departed, appropriate for November.

Sailsman talked about the miracles Jesus performed and how they relate to science. While Christians believe in God, science cannot prove that those events occurred. There is no explanation for God’s works. They just happened and it is hoped that Catholics come to those beliefs naturally.

“We don’t have an explanation for the miracles Jesus performed,” said Sailsman. “From the concept of knowing God, we get theology. Through God’s creation, we get science.”

Many of history’s greatest scientists were members of the Catholic Church. Among them are Guglielmo Marconi, Nicolaus Copernicus, Galileo Galilei, Blaise Pascal, Louis Pasteur and Louis Braille. In 1965, Sister Mary Kenneth Keller became the first woman to receive a PhD in science. In addition to her vocation as a religious sister, she was an educator and pioneer in computer science.

Sailsman concluded her talk with a prayer from Liturgy of the Hours. Afterwards, it was time for questions and comments.

Maria Cardone, a parishioner of Nativity B.V.M., was curious about a debate during the Reformation in determining exactly how old the earth was.

“Cardinals were interested in proof but without scientific proof they would believe what is in Scripture,” said Sailsman.

Father Whittingham referenced the Bible’s book of Genesis and how it contains truth but that it is neither a scientific nor historical record.

“The phrase ‘once upon a time’ is a way of communicating truth,” he said. “Creation plays a role in what we believe.”

Science does not tell us what is right or wrong. Sailsman mentioned that because we cannot repeat what Jesus did during his time on earth, his actions were not scientific. In today’s society, we cannot continue to raise Lazarus from the dead.

“Science does tell us what it is,” said Sailsman.

David Welsh of Bryn Mawr, a member of Our Mother of Good Counsel Parish who regularly attends the Theology on Tap meetings, was intrigued by the presentation on religion and science.

“It was very interesting,” Welsh said. “I found it informative and to a certain degree, entertaining.”

Monthly gatherings, usually held at Quotations, bring anywhere from 15 to 40 people and approximately 75 came to the St. Patrick’s Day party this past March. New members are always welcome.

“We are overjoyed to welcome them,” said Chiara Cardone.

The young adults also work with people of all ages as they participate in various parish ministries such as youth groups, Knights of Columbus and Theology on Tap for adults 40 and over. They hope to establish a young adult holy hour and a faith-sharing group in the future.

“It’s a chance to see a community of people and close friends in a casual setting,” said Batdorf.

Theology on Tap will meet again on Thursday, Dec. 21 at Sligo Irish Pub in Media. 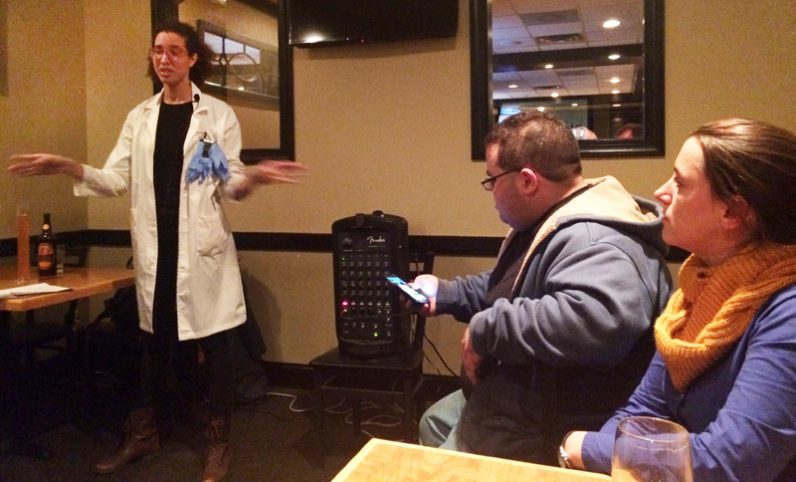 Alex Sailsman (left), a Massachusetts Institute of Technology graduate in materials science and engineering, was the guest speaker for Theology on Tap Nov. 16 in Media.

PREVIOUS: Thanksgiving: A unique holiday for a uniquely diverse nation

NEXT: St. Katherine’s parishioners reach out with Family Volunteer Day