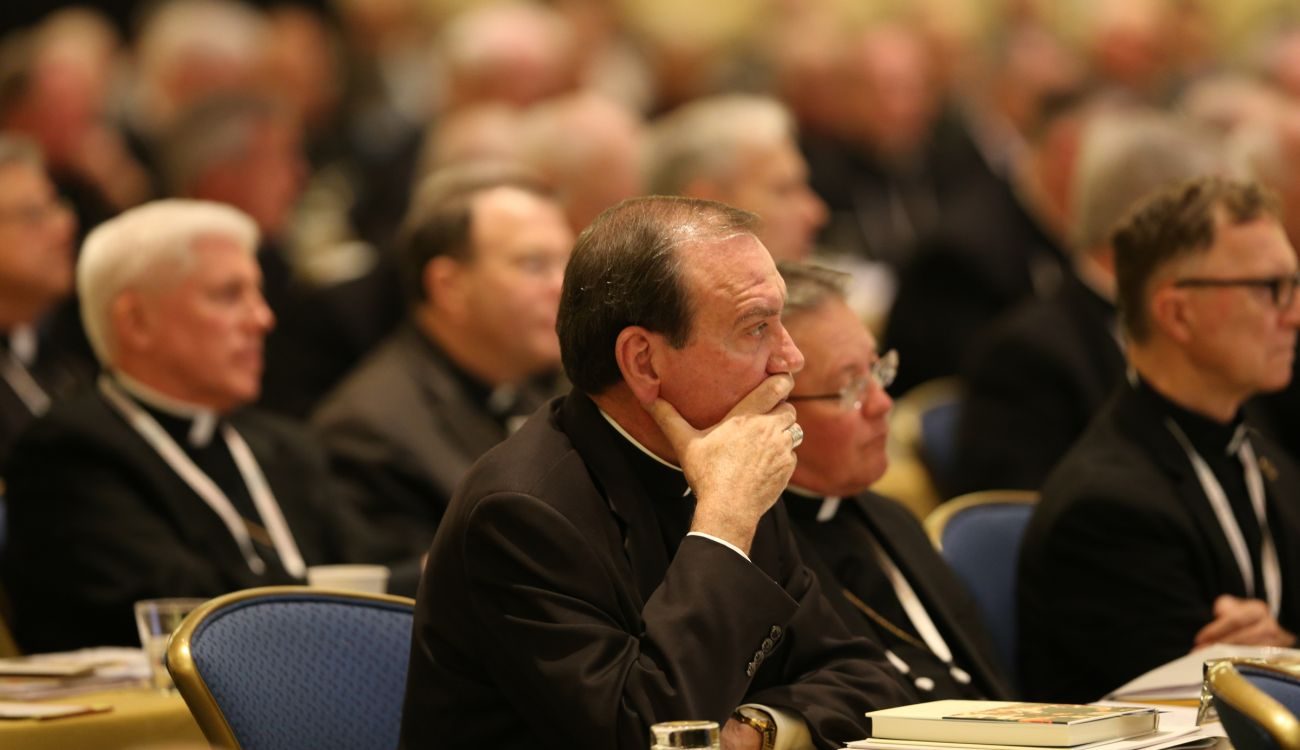 BALTIMORE (CNS) — The U.S. bishops approved the budget for their restricted and unrestricted funds for 2018 in a 125-4 vote, with three abstentions. Passage required a majority of members present.

They also narrowly approved a 3 percent increase in the diocesan assessment for 2019 by a vote of 136-31, with five bishops abstaining. With 197 diocesan and eparchial heads in the United States, the vote required approval by two-thirds, or 132 of them.

The matter was voted on by paper ballot after an electronic balloting malfunction forced the bishops to resort to paper balloting for the rest of the day Nov. 14, the second day of their annual fall general assembly in Baltimore.

The bishops had voted down a request last year to increase the assessment, noted Archbishop Dennis M. Schnurr of Cincinnati, who is treasurer of the U.S. Conference of Catholic Bishops and chairman of the USCCB Committee on Budget and Finance.

As a result, he said, “the staff worked diligently over several weeks … to balance the budget — cutting programs and travel, cutting building maintenance” and curtailing wages “below market value for the D.C. area. It’s a tight, balanced, unrestricted-funds budget.”

In arguing for an assessment increase, Archbishop Schnurr said it would make about $350,000 available for budgeting for 2019. While one year of deferred maintenance may not do harm, he added, “multiple years will carry additional costs as aging systems fail,” which only “compounds through the years.”

The tighter 2018 budget “may have impacted your committee’s abilities to carry out its respective mandates,” Archbishop Schnurr said. The increase in the assessment, he argued, will make the USCCB “better able to fulfill the 2017-2020 strategic plan approved by the bishops.”

The increase, according to Archbishop Schnurr, “represents a commitment and a sacrifice. The cost of our national ministry rises each year by a rather predictable amount, as it does for any national organization.”

He cautioned against an interpretation that the bishops must pay to the Vatican an amount similar to what they assess themselves. “That was a suggestion of one member of the bishops’ conference that we match the financial report. The body of bishops never decided (that) or established a formula,” Archbishop Schnurr said.

In a September report to the bishops, Archbishop Schnurr said the USCCB general fund contributes $400,000 annually to the building fund for the upkeep and maintenance of USCCB headquarters in Washington, the staff house for priest-employees not far from headquarters and Villa Stritch in Rome, “while the projected expenditures each year exceed that amount.” Villa Stritch is the residence for U.S. priests working at the Vatican.

He said that at the residence, “in response to the rising costs” — which exceed the $500,000 mark there alone — “the committee members along with staff will closely monitor the expenditures and work closely with the Villa Stritch’s director to manage well the costs ensuring that the same standards of fiscal responsibility adhered to by the conference are adhered to at the Villa Stritch.”

Compared to the protracted and problematic USCCB audits conducted earlier in the decade, “the 2016 financial statements audit and the single audit reports were issued in June 2017,” Archbishop Schnurr said.

“Both audits received an unmodified or ‘clean’ opinion with no reportable findings. The single audit requires specific tests to ensure compliance with the federal guidelines. Because of the recent favorable audits, the USCCB earned a ‘low-risk auditee’ classification.”

“With the recommendations of the USCCB Executive Committee, the Committee on Budget and Finance continued to explore opportunities to de-risk the pension plan and to reduce he liability,” the archbishop noted in the report. The USCCB moved from a more expensive defined-benefit pension plan to a defined-contribution plan with an employer match five years ago.

“Staff reported on the several meetings they had with the conference’s plan advisers and the pension plan actuary and presented what they believe to be the most viable options. The committee agreed to explore more fully the options presented.

After a lengthy discussion the day before on the issue of racism and a proposed pastoral letter on the subject, the bishops OK’d the creation of an associate director-level position focusing on racism. The vote was 177-22 with two abstentions.

Archbishop Gregory J. Aymond of New Orleans, chairman of the USCCB Committee on Priorities and Plans, said a three-year commitment of $200,000 a year “from an external source,” which he did not name, would pay for the position. It has been USCCB policy to not add jobs unless they receive outside funding or grant money.

Archbishop Aymond said talks were ongoing to find either external or internal funding for the position beyond the original three-year commitment.

NEXT: Beatification will see ‘Jesus planting his cross’ in heart of Detroit