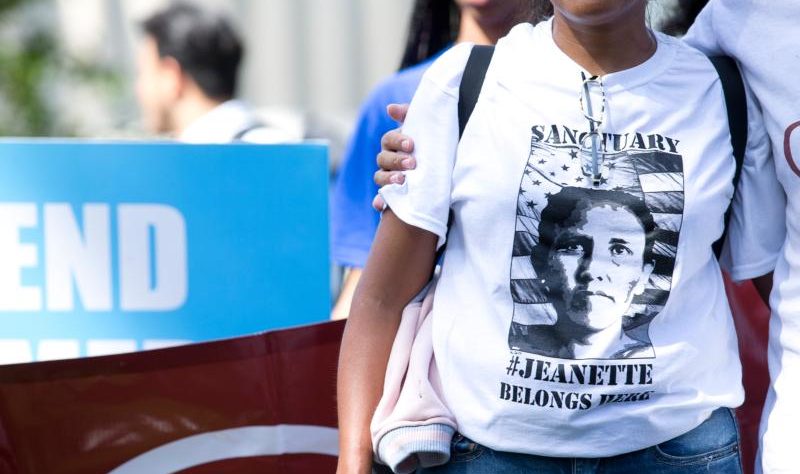 Jeanette Vizguerra, a mother of four who lived in Denver churches for 86 days to avoid immigration authorities, is hugged during an immigration rally near the U.S. Capitol in Washington Sept. 26. Jeanne Atkinson, executive director of the Catholic Legal Immigration Network, said Nov. 16 the agency is revving up its schedule of trainings for lawyers and citizens to represent and advocate for immigrants and refugees. (CNS photo/Tyler Orsburn)

WASHINGTON (CNS) — The Catholic Legal Immigration Network never really had a shortage of opportunities to train lawyers and citizens to represent and advocate for immigrants and refugees.

However, given the tenor of the past year, CLINIC — which was founded by the U.S. bishops but has long been its own separate nonprofit agency — has stepped up its schedule of trainings in response.

CLINIC now has more than 330 affiliates nationwide, said Jeanne Atkinson, its executive director, in a Nov. 16 telephone interview with Catholic News Service from CLINIC headquarters in the Washington suburb of Silver Spring, Maryland.

Not all of the affiliates are Catholic in their origin or orientation, Atkinson added, but all share CLINIC’s mission. “We’re trying to make sure when they provide legal services, they are providing high-quality legal services in a professional manner,” she said.

“We have the largest network of immigration programs around the country,” Atkinson said. Thanks to the number of affiliates, CLINIC can spot trends. “If we hear it five times, then it’s a fluke,” she added. “If we hear if 50 times, then there’s something wrong.”

CLINIC offered a dizzying array of courses, seminars, workshops webinars and e-learning courses in just the first half of 2017 alone. Some of the titles reflect the changing nature of immigration since Donald Trump assumed the presidency:

“Family-Based Immigration in a Time of Enhanced Enforcement”; “The Aftermath of the Executive Orders: Resources to Build Your Rapid Response Plan”; “What All Advocates Need to Know About Removal Orders and Removal Proceedings”; “All About Removal Orders”; “Anatomy of a Removal Proceeding”; “Recent Changes in Immigration Enforcement”; “Is This the End of TPS (Temporary Protected Status)? Preparing Clients and Communities.”

The expanded curriculum was needed because “we’re talking about the demonization of the entire immigrant community,” Atkinson said. “People in the immigration system here are looking at very anti-immigrant playbooks.”

What happened within weeks of Trump’s inauguration, including his first executive order banning travel to the U.S. from certain countries, she added, “confirmed our deepest fears. We had to go up and beyond what we do every day.”

Despite the number of new lawyers fresh out of law school each year, not that many choose to practice immigration law. “It’s extraordinarily complex. It’s comparable to tax law in terms of complexity,” she said.

“An immigration case might be scheduled for 2019, 2020, 2021. If you’re a pro bono attorney, are you going to take a case you’ve had for four years? There’s just not enough private attorneys who are available for that stretch of time. They (cases) can be very time-consuming,” Atkinson added, with some attorneys living “hours and hours away from the clients.”

While CLINIC is happy to bring attorneys up to speed on the latest wrinkles in immigration law and policy through its educational endeavors, it puts considerable effort into training non-lawyers to be advocates.

But merely going through the course and doing homework isn’t enough. Federal immigration authorities, who grant the accreditation, “want to know that you can write, that you’ve worked with someone around court issues,” Atkinson told CNS.

CLINIC stipulates that newly accredited immigration representatives take on a case within three months of gaining accreditation, and CLINIC staff, which has grown by 10 during 2017, will help walk them through it. “It’s got to be the highest quality of service because that’s what we want,” she added.

The hunger for accreditation is there. “Both courses are full” for partial and full accreditation, she said. “People are asking us when we’re doing it again.”

Bishop Kevin W. Vann of Orange, California, chairman of the CLINIC board of directors, lauded the agency in a September information report on CLINIC’s activities for his fellow bishops.

“Especially in times of increased dehumanizing immigrant rhetoric and hostile legislation from government officials toward the immigrant community, CLINIC’s mission to protect the rights and promote the dignity of immigrants guides the agency in its offerings of legal training, advocacy and public education efforts to its network of Catholic and community based immigration legal service providers,” Bishop Vann said.

“The Defending Vulnerable Populations project,” he continued, “was created to increase the number of fully accredited staff and attorneys who can represent immigrants in removal proceedings, train private attorneys to provide pro bono representation to immigrants in removal proceedings, establish immigration centers of excellence in cities with the greatest need for quality deportation defense, advocate against detrimental policy changes and expand public awareness on issues faced by immigrant populations.”

Atkinson said the Defending Vulnerable Populations project has given immigrants a voice for their day in court.

“There’s no right to representation in immigration court,” she noted. “There are literally children 5 years old standing up, trying to represent themselves before a judge in robes. It’s no surprise he’s probably not going to win, he doesn’t speak the language, he has no access to documents. We want to make sure due process rights remain.”

CLINIC also developed, in nine languages, a guide to emergency planning for families. “If you do get picked up and removed, your child could come home from school and there’s nobody there. What should they do?” Atkinson said. The guide takes people through “what they need to do and say.”

Staff also weighs in on state legislation that affects refugees and immigrants, and has a “Know Your Rights” workshop outline so immigrants, regardless of their status, have a better understanding.

CLINIC, while a separate nonprofit, still receives financial support from Catholic sources, including a nationwide appeal. “People should feel proud,” although “I know some people will feel annoyed” by CLINIC’s efforts, Atkinson said, “but this is the church in action.”