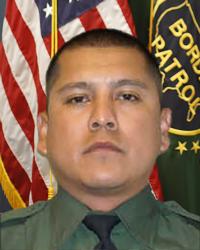 EL PASO, Texas (CNS) — A funeral Mass was celebrated Nov. 25 at Our Lady of Guadalupe Church in El Paso for Rogelio Martinez, the Border Patrol officer who died of injuries to his head and elsewhere on his body.

He was found with a fellow injured officer a week earlier in a remote area about 30 miles from the U.S.-Mexico border.

Martinez, 36, died Nov. 19, a day after he was found, at a hospital in El Paso. The second agent who was injured was also hospitalized, but has since been released. That agent has not been identified. The FBI is still investigating whether the agents were attacked or if they fell, but the incident reignited debate over border security.

In a statement the day before the funeral, El Paso Bishop Mark J. Seitz said the Diocese of El Paso extended condolences the Martinez family, fellow officers and friends. “We will add our prayers to yours for the soul of this deeply loved and dedicated public servant,” he said.

“As we lay Officer Martinez to rest, we will pray also for the swift recovery of his partner and we renew our commitment to pray for all those who serve our country at our nation’s borders. We are very grateful for their service,” the statement said.

The funeral Mass was private. The El Paso Times reported that Border Patrol spokesman Ramiro Cordero told reporters gathered outside the church: “It’s sad to lay down one of our own to rest. It’s sad to see that he made the ultimate sacrifice. But it honors me, and it honors every single law enforcement agent that he was willing to do that — to protect our nation, to protect our borders and to protect those who serve.”

The newspaper also reported that numerous border patrol officials attended the Mass as well as elected officials, including U.S. Reps. Will Hurd and Beto O’Rourke of Texas and U.S. Attorney General Jeff Sessions.

There was a six-mile procession from the church to the cemetery as Border Patrol helicopters hovered over and near the cemetery.

Martinez is survived by his parents, Jose and Elvia Martinez; a son, Sergio Martinez; his fiancee and two brothers, according to his obituary in the El Paso Times.

After Martinez’s death, his father told the local newspaper that his son loved his job even though he had a very dangerous work shift.

He said his son would call him every night.

“And I would tell him, ‘Take care of yourself, son. God bless you,'” the father said.