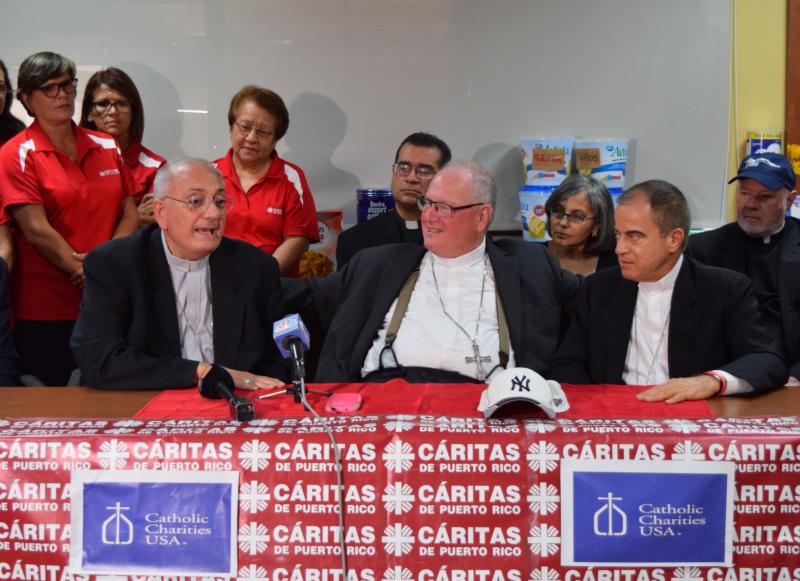 Bishop Nicholas DiMarzio of Brooklyn, N.Y., New York Cardinal Timothy M. Dolan, and Archbishop Roberto Gonzalez Nieves of San Juan, Puerto Rico, attend a news conference Oct. 30 at Caritas International in San Juan. The two New York prelates were on a one-day visit to the island, much of which remains without power or running water more than a month after Hurricane Maria. (CNS photo/Jorge Dominguez, The Tablet)

Their Oct. 30 visit to San Juan was yet another example of the support New Yorkers have offered to the people of Puerto Rico since Hurricane Maria devastated the island.

“Our purpose first is to bring solidarity,” said Bishop DiMarzio at San Juan Cathedral. “We come to help the church here.”

“We come because there are many Puerto Ricans in our dioceses,” he said about the Brooklyn Diocese and the New York Archdiocese. “And they are concerned about their place of origin. So we come to bring some material help but also to bring some solidarity, hope. And to better understand the situation so we can get them the help that they need.”

Traveling with the prelates were Msgr. Kevin Sullivan, executive director of Catholic Charities of the New York Archdiocese; Father Eric Cruz, pastor of St. John Chrysostom Parish in the Bronx and director of Bronx Catholic Charities, and Father James Cruz, pastor of St. Raymond Parish, also the Bronx. The latter two priests both are of Puerto Rican descent and each has family members living on the island.

The group’s visit started with a Mass at the San Juan Cathedral, the seat of the first diocese of the New World.

Before the liturgy, Cardinal Dolan and Bishop DiMarzio, guided by Archbishop Roberto Gonzalez Nieves of San Juan, toured the cathedral and stopped to pray at the tomb of Cardinal Luis Aponte, the only Puerto Rican ever named a cardinal and Archbishop Gonzalez’s predecessor. They also prayed in front of the relics of Blessed Carlos Manuel Rodriguez, the first Puerto Rican to be beatified.

Cardinal Dolan, the main celebrant and homilist at the Mass, reminded the congregation that beyond the solidarity all Christians should offer to his brothers and sisters in times of crisis, he also was there because Archbishop Gonzalez is “a dear friend.”

He told the small congregation about the affection that Archbishop Gonzalez inspired in the members of the New York delegation.

“We know he belongs to you. He’s part of our family, too,” Cardinal Dolan said.

Speaking near the end of Mass, Cardinal Dolan assured those who were present that while they may feel isolated or alone at times, they were not. “Know of my love and prayers always,” the cardinal said.

The message was a balm for Gladys Soto, a secondary school teacher from Bayamon who traveled by car, ferry and foot to attend the Mass.

“The caring, and the happiness and the pain. It makes me want to continue to move forward with the love of Christ,” she told Catholic New York, the archdiocesan newspaper, through a translator after Mass.

In an interview after Mass with Nuestra Voz, Brooklyn’s monthly diocesan publication, Cardinal Dolan explained: “Archbishop Gonzalez, we love him. He used to be a parish priest in the Bronx. And he said to me about two weeks ago, ‘We feel alone and forgotten.’ I said, ‘Well, we are coming to see you. That’s what neighbors do, that’s what the Bible tells us to do, that’s what Holy Mother Church wants us to do.’ So Bishop DiMarzio and I said, ‘Let’s go visit Roberto.'”

Archbishop Gonzalez, 67, has been the spiritual leader of the Archdiocese of San Juan since 1999.

A native of Elizabeth, New Jersey, the prelate was ordained for the Franciscans of the Holy Name Province, based in Manhattan. He served as pastor of Holy Cross parish and parochial vicar of St. Pius V, both in the Bronx, before he was consecrated an auxiliary bishop of Boston in 1988.

Asked about his impressions of the island, Cardinal Dolan said, “The first impression would be the friendliness, the resilience, the welcoming of the people. With all the challenges and difficulties they have been through, they haven’t lost their sense of hope.”

The prelates later visited the headquarters of Caritas Puerto Rico, the equivalent of Catholic Charities on the island. That organization will receive and distribute a significant part of the $700,000 brought by the Archdiocese of New York and the $115,000 sent by the Diocese of Brooklyn.

They toured the facilities with Father Enrique Camacho, director of Caritas Puerto Rico, and held a news conference together with Archbishop Gonzalez and Msgr. Sullivan.

Archbishop Gonzalez, addressing the media, called the island’s current status “still very severe.” He added, “I hope we do not lose our sense of urgency.”

After the news conference, Archbishop Gonzalez told Catholic New York that the situation in San Juan was improving. “Roads are opening. Schools opened today. Things are beginning to move again.”

He called the visit by the prelates, and the others from New York, “a moving gesture of fraternity and solidarity, what it means to be church.”

Later in the day, the group went to a mountaintop on the outskirts of San Juan where the National Shrine of Our Lady of Providence will be built. A gigantic metal cross and a life-size Way of the Cross can be seen at the site.

The last stop of the quick nonstop schedule was at the Carmelo de San Jose, a cloistered convent in the Trujillo Alto municipality. The 1970s Brutalist-style convent endured the full impact of Hurricane Maria.

After singing “Salve Regina” at the chapel, the visitors talked with the nuns. Several of them are over age 80. They told the bishops how they spent hours in their cells alone in the dark, while the hurricane blasted their convent.

Both Cardinal Dolan and Bishop DiMarzio spoke with evident emotion about their love and respect for cloistered nuns. The cardinal explained that part of the assistance they had brought was to repair damages the convent suffered during Hurricane Maria.

Two of the younger Carmelite nuns sang a song in honor of the visitors. The rhythm was 100 percent Puerto Rican. In the lyrics, they thanked Archbishop Gonzalez for bringing the prelates to the convent.

One sister, addressing the New Yorkers, spoke of the need for “spiritual reconstruction” in the storm’s wake. “Material things, finally, are not the most important,” she said.

Dominguez-Lopez is the editor of Nuestra Voz, the Catholic monthly publication of the Diocese of Brooklyn. Contributing to this story was John Woods, editor-in-chief of Catholic New York, newspaper of the Archdiocese of New York.