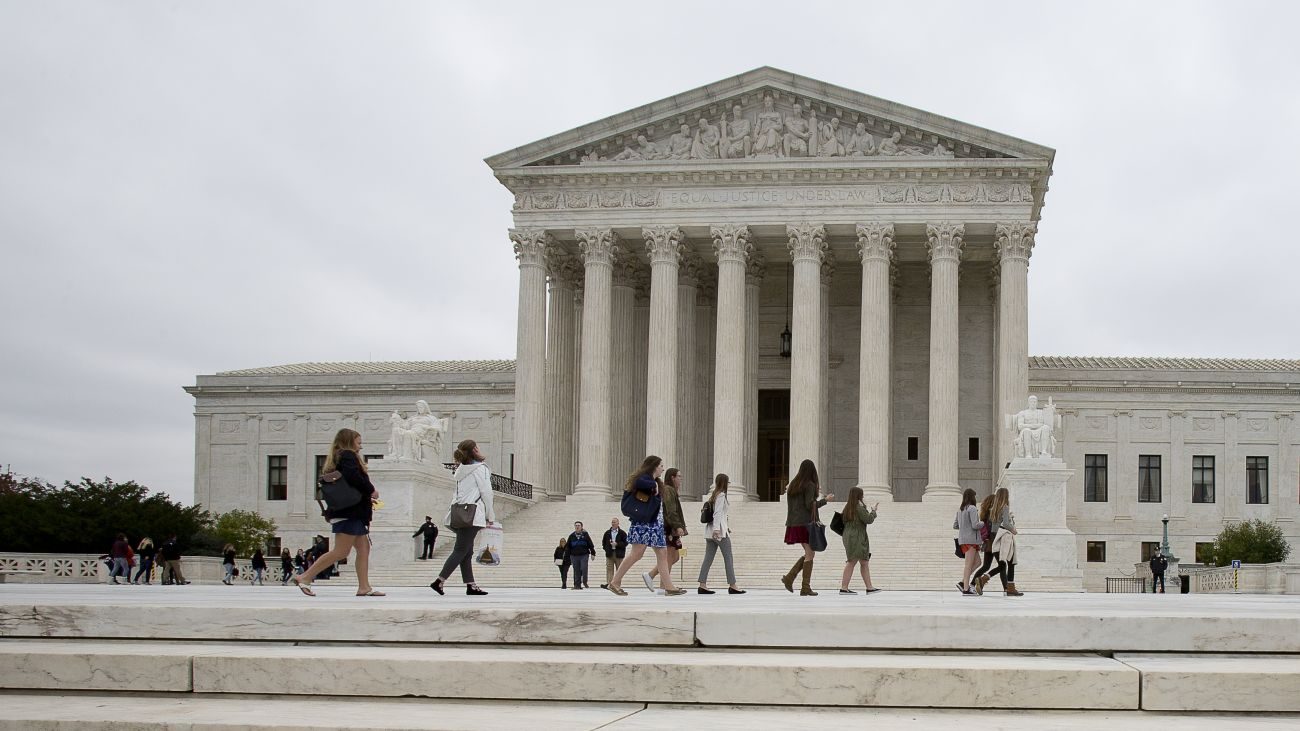 People walk outside the U.S. Supreme Court in Washington Nov. 8. The court announced Nov. 13 that it will hear a freedom of speech case involving a 2016 California law that requires the state's 200 crisis pregnancy centers to inform their clients, in specific detail, about the availability of free or low-cost abortion and contraceptive services and provide a referral number for them. (CNS photo/Tyler Orsburn)

WASHINGTON (CNS) — The Supreme Court has decided to hear a case examining freedom of speech at crisis pregnancy centers.

The case, accepted Nov. 13, will consider if a California law that went into effect in 2016 violates the Constitution by requiring the state’s 200 crisis pregnancy centers to inform their clients, in specific detail, about the availability of free or low-cost abortion and contraceptive services and provide a referral number for them.

It also said the required signs were simply to inform clients of the existence of these services and did not encourage or suggest that clients should use them.

This October, a California Superior Court judge granted a permanent injunction against the state attorney general preventing him from enforcing the Reproductive FACT law.

“Compelled speech must be subject to reasonable limitation,” ruled Riverside County Superior Court Judge Gloria Trask in the Oct. 30 decision that provided injunctive relief statewide and prevented the law from being enforced.

“The statute compels the clinic to speak words with which it profoundly disagrees when the state has numerous alternative methods of publishing its message. … In this case, however virtuous the state’s ends, they do not justify its means,” the judge said.

“We are thrilled with Judge Trask’s ruling, which is a huge victory for free speech,” said Scott Scharpen, founder and president of the Scharpen Foundation, which operates the Go Mobile for Life pregnancy clinic. “The whole notion of being compelled to share information with our patients about abortion availability, which is contrary to our mission and purpose, is fundamentally wrong.”

Ned Dolejsi, executive director of the California Catholic Conference, similarly told Catholic San Francisco, the archdiocesan newspaper, that he applauded the judge’s ruling. He said the state’s Catholic bishops oppose the legislation for pregnancy centers which he described as “a pure and simple violation of free speech and a violation of religious liberty.”

The case before the Supreme Court is called National Institute of Family and Life Advocates v. Becerra. It will be the first abortion-related case heard by the court with President Donald Trump’s appointee, Neil Gorsuch, on the bench.

A friend-of-the-court brief filed by the National Association of Evangelicals, the Christian Legal Society and the National Legal Foundation said that “abortion remains one of the most contentious issues of our public life” and that when courts appear to “be taking sides” on the issue, it requires the Supreme Court to step in to “assure uniform standards are applied on both sides of this issue.”

California’s attorney general, Xavier Becerra, who will represent the state in the oral arguments, said in a statement that “information is power” and that “all women should have access to the information they need when making personal healthcare decisions.”

Alliance Defending Freedom will represent the National Institute of Family and Life Advocates, a national nonprofit organization providing legal counsel, education and training for pro-life pregnancy centers. Thomas Glessner, the group’s president, said in a statement that the case could have broad implications particularly on “similar unconstitutional laws in Illinois and Hawaii.”

PREVIOUS: Priest seen as ‘Catholic Martin Luther King’ who gave ‘all to his faith’