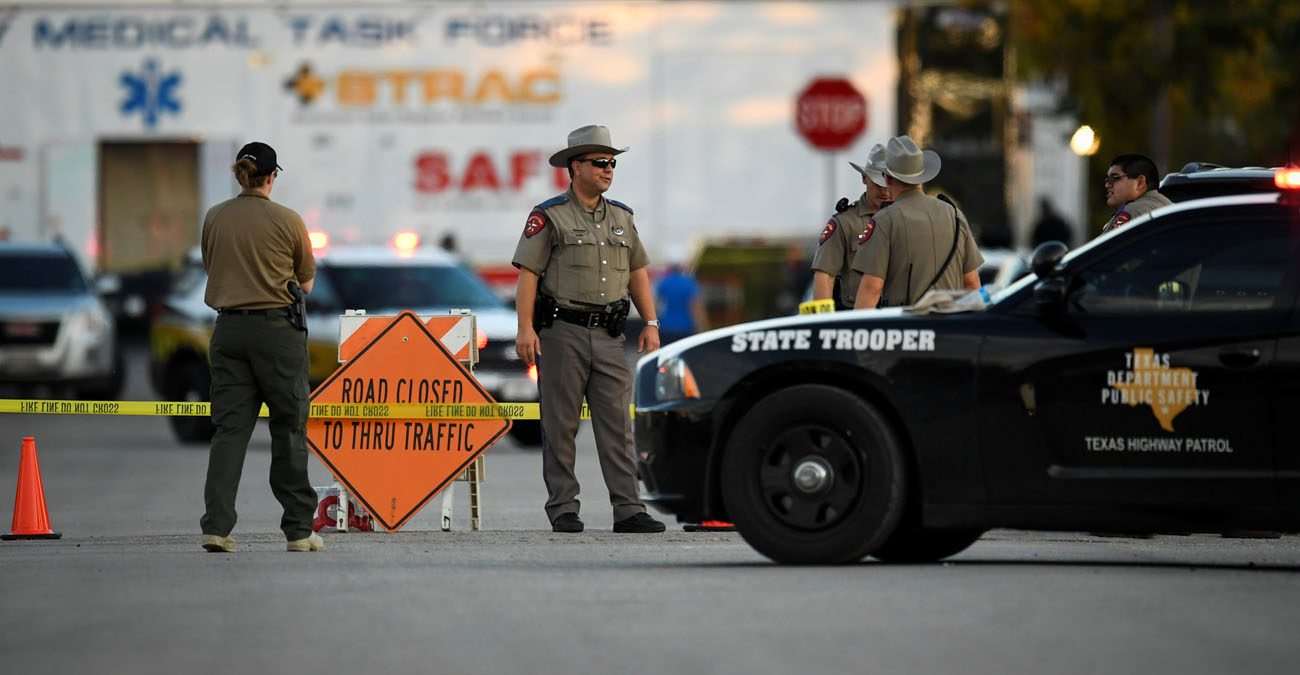 Law enforcement officers stand near the scene of a mass shooting Nov. 5 at the First Baptist Church in Sutherland Springs, Texas. A lone gunman entered the church during Sunday services taking the lives of at least 26 people and injuring several more. (CNS photo/Mohammad Khursheed, Reuters)

UPDATED – WASHINGTON (CNS) — The U.S. Catholic Church stands “in unity” with the First Baptist Church in Sutherland Springs, Texas, and the larger community after a shooting during Sunday services took the lives of at least 26 people and injured at least 20 others.

Those who died ranged in age from 1 to 72 years old, and included 14-year-old Annabelle Pomeroy. Her father, Frank Pomeroy, is pastor of the church but he was not at the service.

“We stand in unity with you in this time of terrible tragedy — as you stand on holy ground, ground marred today by horrific violence,” said Cardinal Daniel N. DiNardo of Galveston-Houston, president of the U.S. Conference of Catholic Bishops.

With San Antonio Archbishop Gustavo Garcia-Siller, “I extend my prayers and the prayers of my brother bishops for the victims, the families, the first responders, our Baptist brothers and sisters, indeed the whole community of Sutherland Springs.”

Pope Francis Nov. 7 called the mass shooting an “act of senseless violence” and asked Archbishop Garcia-Siller to convey his condolences to the families of the victims and to the injured. Cardinal Pietro Parolin, Vatican secretary of state, also sent assurances of the pope’s prayers in a message to the archbishop.

Law enforcement officials told CNN that a lone gunman entered the church at about 11:30 a.m. CST while 50 people were attending Sunday services. Almost everyone in the congregation was shot. Sutherland Springs is 30 to 40 miles southeast of San Antonio.

Two law enforcement officials told The Associated Press the suspect was Devin Kelley, described as a white male in his 20s. He parked at a gas station across the street from the church, crossed the street and allegedly began firing as he walked toward the church and then continued firing once inside. He was wearing black tactical-type gear and used an assault weapon, AP said.

After he left the church, he was confronted by a local resident who had a rifle “and engaged the suspect,” AP said, quoting Freeman Martin, who is with the Texas Department of Public Safety. The suspect was later found dead in his vehicle some distance away. Police said Kelley died from a self-inflicted gunshot wound.

Kelly had been in the Air Force but was discharged for bad conduct, allegedly for domestic abuse, and served a 12-month sentence in confinement after being court-martialed in 2012.

His in-laws were members of the First Baptist Church.

“We need prayers!” exclaimed Archbishop Garcia-Siller in a Nov. 5 statement. “The evil perpetrated on these (families) who were gathered to worship God on the Lord’s Day — especially children and the elderly — makes no sense and will never be fully understood,” he said. “Disbelief and shock are the overwhelming feelings; there are no adequate words. There can be no explanation or motive for such a scene of horror at a small country church for families gathered to praise Jesus Christ.”

He added, “Let’s help these brothers and sisters with prayers; they need us. Also, pray fervently for peace amidst all of the violence which seems to be overwhelming our society. We must be lights in the darkness.”

“When we go to church to worship God we enter a world that is what we dream life will be,” said Bishop Mark J. Seitz of El Paso, Texas, in a Nov. 5 statement. Those murdered in the church, he added, “have given the ultimate witness.”

Bishop Seitz said, “As with any act of terror we must not allow evil behavior to make us fearful or to prevent us from doing what is right. Ultimately, we know that the love of God will be victorious.”

“Our hearts ache for those suffering from the terrible loss of life,” said the Texas Catholic bishops in a joint statement issued Nov. 6. “We open our hands and hearts for these families in this moment of terrible tragedy. We should all fall on our knees in prayer in this moment of disaster.”

“Our nation struggles to comprehend, to understand, to face another moment that demands that we address the root causes of such horrendous brutality,” said a Nov. 6 statement from Archbishop Wilton D. Gregory of Atlanta.

“Among the causes that must be confronted are easy and unrestricted access to military-style firearms, the lack of similarly unrestricted access to effective mental health care for too many emotionally fragile citizens, and the proliferation of hatred and vitriolic material on social and mass media that often radicalizes people who then act in ways that harm and terrorize us all.”

“Once again we are shocked and heartbroken at the latest incident in our country of senseless gun violence, this time at a house of worship, a place of prayer and peace,” said Bishop Nelson J. Perez of Cleveland in a Nov. 6 statement.

“As we try to comprehend this horrific incident, we recall the words of St. Pope John Paul II who implored us to reject a culture of death and embrace a culture of life,” said Bishop Perez, who scheduled a Nov. 9 Mass for peace and healing at St. John Cathedral in Cleveland in light of the recent mass deaths in Las Vegas, New York City and Sutherland Springs.

“We ask the Lord for healing of those injured, his loving care of those who have died and the consolation of their families,” Cardinal DiNardo said in his statement. “This incomprehensibly tragic event joins an ever-growing list of mass shootings, some of which were also at churches while people were worshipping and at prayer, he continued.

“We must come to the firm determination that there is a fundamental problem in our society. “A culture of life cannot tolerate, and must prevent, senseless gun violence in all its forms. May the Lord, who himself is peace, send us his spirit of charity and nonviolence to nurture his peace among us all,” the cardinal said.

In a Nov. 6 statement, Cardinal Blase J. Cupich of Chicago said it “would dishonor those lost and those who mourn to simply participate in the routine exchange of sympathies underpinned by the sense of futility and hopelessness that has befallen our country.”

“We must recognize that the factors that produce these tragedies will not change unless we take direct action to change them,” he said.

Pittsburgh Bishop David A. Zubik urged the country “to reclaim a culture of life and a civilization of love, in which people actually solve problems by helping others.

“We need to refocus our entertainment, so that instead of encouraging violence, it inspires us with stories of selfless love and service,” he said in a statement. “There will always be wounded souls who seek to lash out in anger. We need to do everything possible to make it unthinkable and difficult to express that anger with a gun.”

NEXT: Married priests may be open for debate, but only for Amazon