As Brazil cracks down on drugs, parish religious life changes 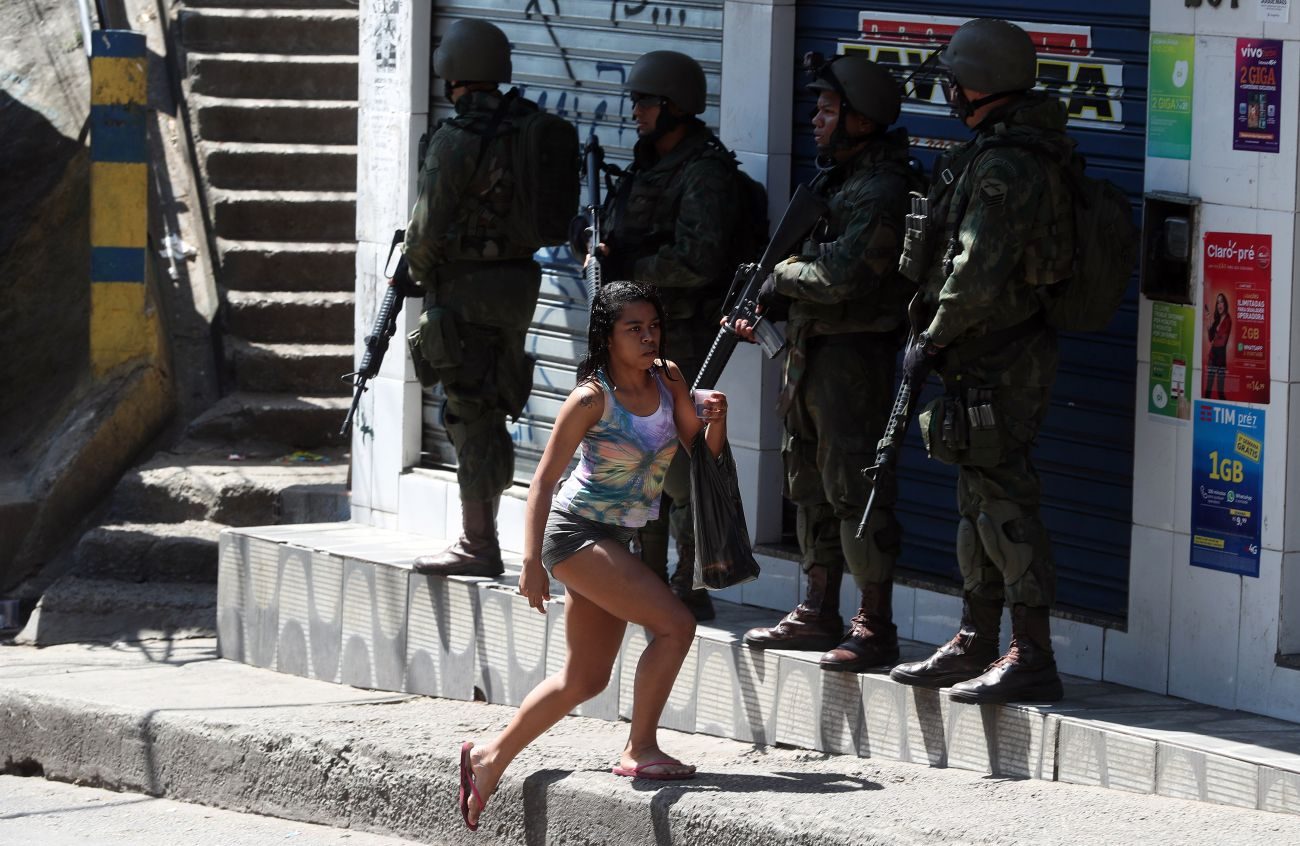 A woman walks past soldiers of the Brazilian army as they patrol a street in the Rocinha favela of Rio de Janeiro. Police crackdowns on drug dealers in the area have affected people's religious activities. (CNS photo/Marcelo Sayao, EPA)

RIO DE JANEIRO (CNS) — For years favela residents throughout Rio de Janeiro have lived side-by-side with drug traffickers, who flock to these very poor mountainside communities confident that police would not go up the steep alleyways to arrest them.

Recent government efforts to capture the drug traffickers, however, have led police to venture farther into these communities and threaten residents’ daily lives, including their religious routines.

“Can you hear the fireworks?” asked Franciscan Father Sandro Roberto da Costa, who has been working in Our Lady of Good Voyage Parish in the Rocinha favela for the last two years. “Soon we will hear gunshots. It always starts with fireworks and then come the shots,” he said matter-of-factly during an interview with Catholic News Service.

Rocinha is one of Latin America’s largest favela communities, home to almost 70,000 people, according to a 2010 survey. Here the recent battle between two drug trafficking groups and the attempts by military police to crack down on drug activity in areas like this are starting to take their toll on residents.

“Parishioners still come to Mass,” said Father da Costa, “but not as often as they did before, and we have had to change some of the late-night Masses to early evening or even afternoons.”

He said approximately 2,000 parishioners continue to attend one of the several weekend Masses in Rocinha’s eight Catholic chapels.

But the community’s religious life has been affected. Early in November, as Brazilian Catholics celebrated the 300th anniversary of the discovery of a statue of Our Lady of Aparecida, Brazil’s patroness, Father da Costa decided to cancel the much-awaited procession because of safety concerns.

“The procession would pass through narrow alleys and end in a small square that is often stage to gunfire battles between police and criminals,” he said. “We couldn’t risk a stampede if shots were fired that day.”

Father da Costa said that, since the beginning of the year, several church activities have been canceled because of the growing clashes between rival drug trafficking groups and the police.

He said local Franciscans often cut short their Masses in Rocinha because of the violence.

“When shots are heard, it is common for smaller children to run up to the altar and hide behind me, crying,” he said.

On the other side of town, in the Mare favela, Dayanne Mara, secretary of Holy Family Parish, said residents have found a way to switch back and forth from “normal to emergency mode.”

“When (military) operations occur, we close everything — courses, youth group meetings, cancel Masses — until the operation ends and the soldiers leave the streets,” Mara said. “Afterward life goes back to normal, and we go back to our routine as if the clashes never happened.”

She said that in the last few months, with the increasing number of clashes between the drug trafficking group that controls the area and military police trying to dismantle the group, the routine of many Catholics in the Mare complex has been altered.

“People nowadays tend to attend morning Masses more than night Masses, they want to be in their house when the sun goes down,” she said. Holy Family Parish is located next to the favela’s police headquarters.

Asserting that she is not an apologist for drug traffickers, Mara said that, before the military operations, life in Mare was calmer.

“I was born in the Mare and lived here all my life. The drug traffickers do not cause problems here; they respect the church and leave us alone, just as we do them. The operations are the ones that cause concern, because a bullet does not have direction; when gunfire occurs, it can hit anyone and anything.”

The current state security plan to expel traffickers from some of the better-known communities has led these groups to try to move into other favelas, leading to clashes among criminal groups and against police.

“Our life here as a parish community has been turned upside down with the recent clashes,” Father da Costa said. “We have lost many parishioners who have either abandoned their houses in the community or simply have chosen to attend Mass somewhere else.”