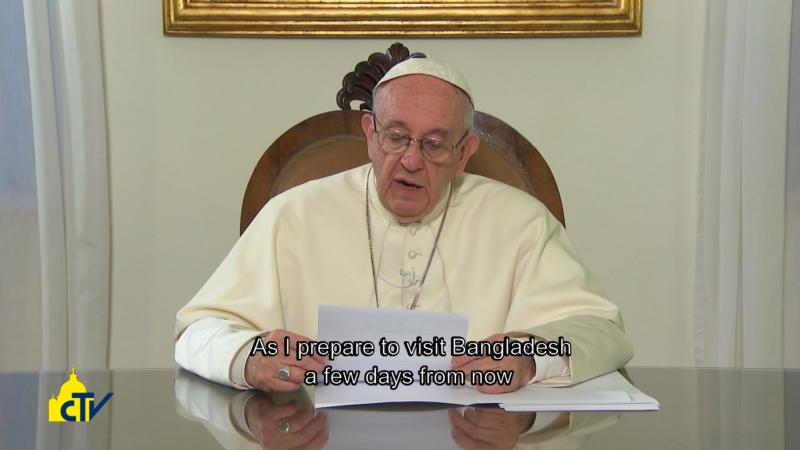 Pope Francis delivers a video message to the people of Bangladesh from the Vatican Nov. 21. The pope is scheduled to visit Bangladesh Nov. 30- Dec. 2 during a six-day trip that also includes a visit to Myanmar. (CNS photo/Vatican television)

VATICAN CITY (CNS) — Pope Francis said he would travel to Bangladesh to proclaim the Gospel message of “reconciliation, forgiveness and peace,” and he said he was especially looking forward to a meeting with the nation’s religious leaders.

“We are living at a time when religious believers and people of goodwill everywhere are called to foster mutual understanding and respect and to support each other as members of our one human family,” the pope said in a video message to the people of Bangladesh.

“I especially look forward to meeting religious leaders,” he said in the video, which was released at the Vatican Nov. 21.

Pope Francis is scheduled to leave Rome Nov. 26 for a visit to Myanmar Nov. 27-30 and Bangladesh Nov. 30-Dec. 2.What the Vatican described as an “interreligious and ecumenical meeting for peace” is scheduled for Dec. 1 in the garden of the archbishop’s residence in Dhaka’s Ramna neighborhood.

The vast majority — some 90 percent — of Bangladesh’s people are Muslim. The largest minority group is made up of Hindus. Christians are about 1 percent of the population. The ecumenical National Council of Churches in Bangladesh includes 13 Christian denominations; although the Catholic Church is not a member, it has a strong working relationship with the council.