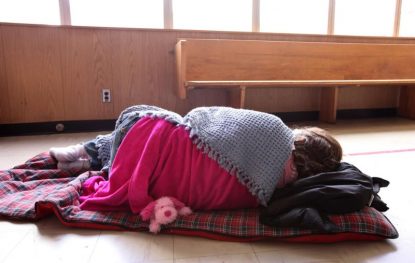 A homeless woman sleeps on the floor in 2010 inside a church in Vancouver, British Columbia. Mildred Moy, a member of St. Mary Parish in Vancouver and a former IBM employee, started Catholic Street Ministries after spending 14 years volunteering to serve homeless people in her city. (CNS photo/Barbara Walton, EPA)

VANCOUVER, British Columbia (CNS) — Mildred Moy at one time was apprehensive about speaking to homeless people on the street.

Nearly 14 years later, she’s out on the streets with them, devoting herself to befriending homeless people and women being trafficked for sex and recruiting other street missionaries.

Moy seemingly had it all: two university degrees and a high-paying job with IBM, yet she felt empty. That is, until she had what she described as a conversion experience that changed her way of seeing the world and set her on a new path. She left her job in 2004 and started St. Mary’s Street Ministry at her Vancouver parish.

The ministry at St. Mary Parish grew to include about 30 volunteers who would regularly take to the streets to meet with whomever they encountered. Still, Moy felt called to do more. In 2015, she started Catholic Street Missionaries to recruit more people to be full-time street missionaries.

“We journey with people who want to leave the street, and if they call you because they need someone to talk to but you don’t have the time, it’s a big loss,” Moy said, explaining the inspiration behind the creating the group.

Catholic Street Missionaries was incorporated as an official ministry of the Archdiocese of Vancouver in 2016 with seven volunteers who would split their time between their regular jobs and street missionary work. “Three are discerning becoming full-time missionaries,” Moy said.

Full-time missionary work included spending 18 to 20 hours a week in prayer in addition to hitting the streets to meet people in need and supporting those who were transitioning away from street life. Part-time missionaries would split their time between their jobs outside of the ministry and their missionary work.

On Saturday evenings, the missionaries went out to meet with women who were being trafficked for sex. On Sunday afternoons, the group would reach out to the homeless. They started with Bible study and prayer.

“We have to be a bridge between the person we meet and God … so we must be filled with God,” Moy said.

In the winter, the volunteers would provide cold-weather supplies to the people they met, but their focus would be providing spiritual and emotional support. “The government provides many opportunities (for people on the streets), but the person on the street needs to have a reason to change their life,” said Moy, explaining that the street missionaries tried to help people find a reason to change.

Moy said most of the women being trafficked whom she had met reported being abused as children. A homeless count in September by local nonprofit organizations for the Metro Vancouver Homeless Partnering Strategy Community Entity found that 3,605 people were experiencing homelessness in the greater Vancouver area and of those, more than 80 percent reported suffering from addiction, a medical condition, or mental illness.

“If we don’t address mental health, we won’t deal with homelessness,” Moy said. She believes improving access to housing was part of the solution to homelessness but not the full solution.

Many of the people Moy had met had lost connection with their families because of the various mental health and personal issues with which they struggled. They also reported feeling invisible. Combined, those factors made it difficult for people to change their lives.

“People forget that street people don’t have anyone to listen to them,” she said.

The street missionaries’ work did not end once a person decided to transition away from life on the streets or in the sex trade. “After they leave the street, there are financial concerns and lots of barriers. We support them in that transition,” Moy said.

Over the years, Moy has received more satisfaction than she ever imagined in ministering to people in need, but she recognized many people might be scared to approach a homeless person and strike up a conversation.

“They are more scared of us because they have nothing and they see us as being in power,” she said, adding that even just a smile of acknowledgement means a lot to a person living on the street.

They key to making a difference, according to Moy, was to remember that “people on the street are just like everyone else.”

“If I’m so blessed, the minimum I can do is give back.”

More information about Catholic Street Missionaries can be found online at www.catholicstreetmissionaries.org/.

PREVIOUS: Jesus shows that death is not the last word, pope says

NEXT: Book says nuns found John Paul I dead, could help on path to sainthood