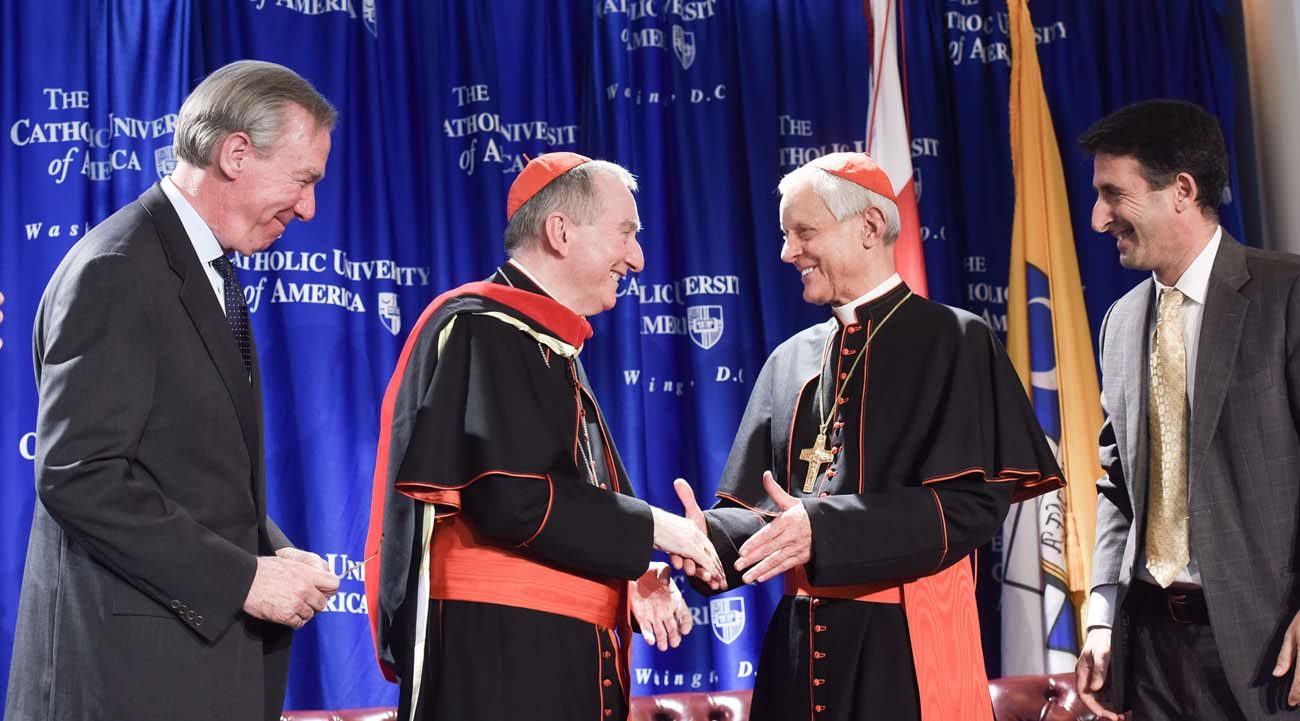 WASHINGTON (CNS) — The Second Vatican Council continues to have an enduring impact on the Catholic Church and on the papacy of Pope Francis, according to the Vatican’s top diplomat, Cardinal Pietro Parolin.

That gathering of bishops from around the world presented a new paradigm of a “world church — a church with a global dimension,” said the cardinal, who is the Vatican’s secretary of state.

During a mid-November visit to the United States that included celebrating a Mass in Baltimore to mark the centenary of the U.S. Conference of Catholic Bishops, Cardinal Parolin stopped in Washington to deliver an address at The Catholic University of America.

He spoke on the topic “The Council: A Prophecy That Continues With Pope Francis.” Afterward, he received a received an honorary doctorate in theology from the university.

In his Nov. 14 talk, he said that although Vatican II occurred more than 50 years ago (1962-65), “it certainly retains for the church a prophetic character.”

Cardinal Parolin said the main consequences of the council included the introduction of local languages in the liturgy, and a “new awareness of a church that is historically realized in more diverse cultural contexts.”

Noting themes that have been stressed by Pope Francis, the cardinal said Vatican II sowed seeds of synodality and paved the way for “a church that lives in a conciliar way” with collaborative and consultative efforts underway at every level of the church. “No more parishes or dioceses without pastoral councils, no more countries without episcopal conferences,” he said.

That process, he added, has proven to be irreversible. “In the end, is this not the most beautiful inheritance that the council could have prepared for us?” he asked.

Cardinal Donald W. Wuerl of Washington, Catholic University’s chancellor, offered an invocation and then introduced Cardinal Parolin. He noted the prelate is known as an expert in Mideast affairs who was responsible for efforts bringing Israelis and Palestinians together for peace talks. In Asia, Cardinal Parolin also was instrumental in efforts to build up ties between the Vatican and Vietnam, Cardinal Wuerl said.

“In this whole process, Cardinal Parolin has always been able to put the face of the church and the face of Christ’s love into diplomatic action,” Cardinal Wuerl said.

Cardinal Parolin spoke to the Catholic University audience in Italian, while a translation in English appeared on video screens via closed captioning. Those in attendance included university administrators, faculty members and students. Guests included Archbishop Christophe Pierre, apostolic nuncio to the United States.

The cardinal noted that from the council’s conclusion and then throughout his pontificate, Blessed Paul VI “dedicated himself to focusing on the inheritance of the council, to illustrate the richness of the teachings,” using the “image of a river which flows nourishing itself from its source,” reaching generation to generation, in “new lands and new situations.”

Quoting Pope Francis’ 2013 interview with La Civilta Cattolica, the Jesuit Italian-language magazine, the cardinal pointed out that the pope said: “Vatican II was a re-reading of the Gospel in light of contemporary culture. Vatican II produced a renewal movement that simply comes from the same Gospel. Its fruits are enormous.”

The image of the people of God in “Lumen Gentium,” the cardinal added, shaped the themes that Pope Francis emphasized in his 2013 apostolic exhortation “Evangelii Gaudium” (“The Joy of the Gospel”).

In that document, the pontiff pointed out how the faith unfolds in people’s daily lives around the world and is shared in their own languages and cultures as they carry out the work of the new evangelization as missionary disciples in today’s world.

Pope Francis, the cardinal added, also has emphasized the dignity of the laity and warned against clericalism, drawing attention to “the process of the transformation of a church that passed from total concentration of every active function in the hands of the clergy, to a recognition of the right and duty of the lay faithful to participate in the life and mission of the church.”

The cardinal noted that in a 2016 letter, Pope Francis warned that clericalism limits the laity’s “necessary boldness to enable the good news to be brought to all areas of the social and above all, the political sphere.”

The pope in that letter also pointed out that committed laypeople are not only those “dedicated to the works of the church and the matters of the parish or the diocese,” but the church also must reflect on “how to accompany baptized people in their public and daily life; (and) on how in their daily activities, with the responsibilities they have, they are committed as Christians in public life.”

The Vatican II fathers also emphasized the importance of the Catholic Church identifying with the poor, said Cardinal Parolin, who quoted a section of Pope Francis’ “The Joy of the Gospel” emphasizing the pope’s often-stated desire for a church that is poor and for the poor.

John Garvey, president of Catholic University, conferred the honorary doctorate on the cardinal, who said he was thankful for receiving the honor “from such a faithful and prestigious university.” He also was thankful for being invited to speak at the university, which he said “is dedicated to the formation of hearts and minds.”

NEXT: Filipino priests called to walk with fellow immigrant Catholics