Pope adds meetings, including with general, to Myanmar itinerary 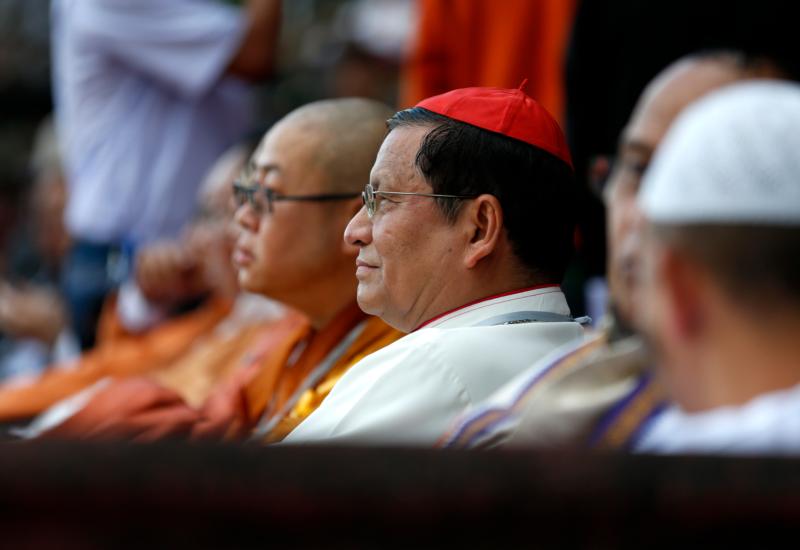 VATICAN CITY (CNS) — Accepting suggestions by Myanmar’s cardinal, Pope Francis has added two private meetings to the schedule for his visit to the country: one with religious leaders and the other with the commander of the military, who wields great political power in the country.

Greg Burke, director of the Vatican press office, said Pope Francis will meet Nov. 28 with representatives of various religions present in Myanmar and Nov. 30 with Gen. Min Aung Hlaing. Burke also said the public Mass in Yangon Nov. 29 will begin an hour earlier than originally scheduled because of the heat.

About 90 percent of Myanmar’s population follows Theravada Buddhism, and Pope Francis already had a meeting scheduled with the Sangha supreme council, which oversees the Buddhist monks throughout the country. But Myanmar also is home to Muslims, Hindus and followers of other Buddhist traditions, as well as Baptists, who far outnumber Catholics in the country.

The military in Myanmar, and Gen. Min Aung Hlaing in particular, have been harshly criticized by the international community for their campaign against the Rohingya people, a Muslim minority. The military claims the crackdown is a response to violence, but the United Nations has said the crackdown is hugely disproportionate and amounts to ethnic cleansing.

Cardinal Charles Bo of Yangon, who suggested the pope meet with the general, has publicly said he urged Pope Francis not to use the word “Rohingya” for fear of inciting Buddhist nationalists and the military. Burke told reporters they would have to listen to the pope’s speeches to see if he accepted that suggestion as well.

Representatives of the hundreds of thousands of Rohingya refugees living in Bangladesh will meet Pope Francis Dec. 1 in Dhaka during an interreligious and ecumenical meeting for peace, Burke said.

Below is the revised schedule for Pope Francis’ visit to Myanmar and Bangladesh. Time listed are local with Eastern Standard Time in parentheses.

— 5:15 p.m. (5:45 a.m.) Meeting with government authorities, members of civil society and the diplomatic corps in the city’s international convention center. Speech by pope.

— 6 p.m. (7 a.m.) Meeting with government authorities, members of civil society and the diplomatic corps in the presidential palace. Speech by pope.

— 5 p.m. (6 a.m.) Interreligious and ecumenical meeting for peace in the garden of the archbishop’s residence. Speech by pope.

PREVIOUS: At Mass, Jesus seeks to bring others with him to salvation, pope says

NEXT: Bangladeshi religious leaders have high hopes for pope’s visit