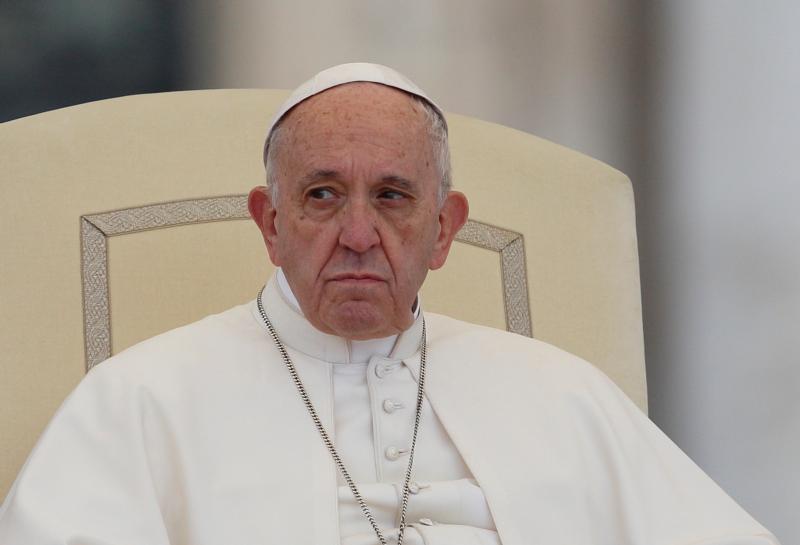 Pope Francis looks on during his general audience in St. Peter’s Square at the Vatican in this Nov. 15, 2017, file photo. (CNS photo/Paul Haring)

VATICAN CITY (CNS) — Putting the brakes on dangerous and distracted driving, Pope Francis criticized using mobile phones when at the wheel and treating roads like racetracks.

While praising the work and sacrifice of police officers dealing with transit and highway patrol, he also cautioned them against turning the just use of force into brutality.

“Wisdom and self-control are needed, especially when the police officer is viewed with mistrust or seen almost as an enemy, instead of as a guardian of the common good,” he said.

The pope made his remarks in a speech Nov. 20 to staff and managers of the central administration of the Italian police in charge of traffic and highway patrol and of the railways.

Whenever officers must check or constrain someone, “it’s important to rely on a use of force that never degenerates into violence,” he said, particularly in places where the police are looked upon with distrust, which unfortunately is widespread and, in some cases, pits society against the state.

Mercy is essential, he said; mercy is not weakness nor does it mean renouncing all use of force.

“Instead, it means being able to not equate the culprits with the crime they commit, ending up causing damage and creating a feeling of revenge; it also means making an effort to understand the needs and motives of the people that you encounter in your work,” he said.

The pope asked the officers and their supervisors to “use mercy in the countless situations of weakness and pain that you confront daily” not just with victims of crime or accidents, but with the poor and vulnerable, too.

With so many people depending on increased mobility, the pope said traffic officers have a lot to do, especially when driving and commuting has become “increasingly complex and unruly.”

Not only do roads and safety measures lack needed improvements and investments, officers must deal with the “poor sense of responsibility by many drivers, who often seem not to realize the even serious consequences of being distracted — for example, with the improper use of cellphones — or being reckless.”

He said these behaviors were caused by people being in too much of a hurry or competitive, which turns “other drivers into hurdles or adversaries to overtake, transforming roads into ‘Formula One’ racetracks and traffic lights into the starting line for a grand prize.”

Increased sanctions will not be enough, he said. Education and a greater awareness of responsibility and a civic duty toward one’s fellow travelers are needed.

The pope encouraged the officers to carry out their duty and mission “with honor and a deep sense of duty” in serving others.

While often they are not appreciated enough, the officers are “on the front lines” in fighting that which harms others, creates chaos and feeds unlawfulness that hinders progress and happiness, he said.