Get to Mass early; don’t calculate how late you can be, pope says 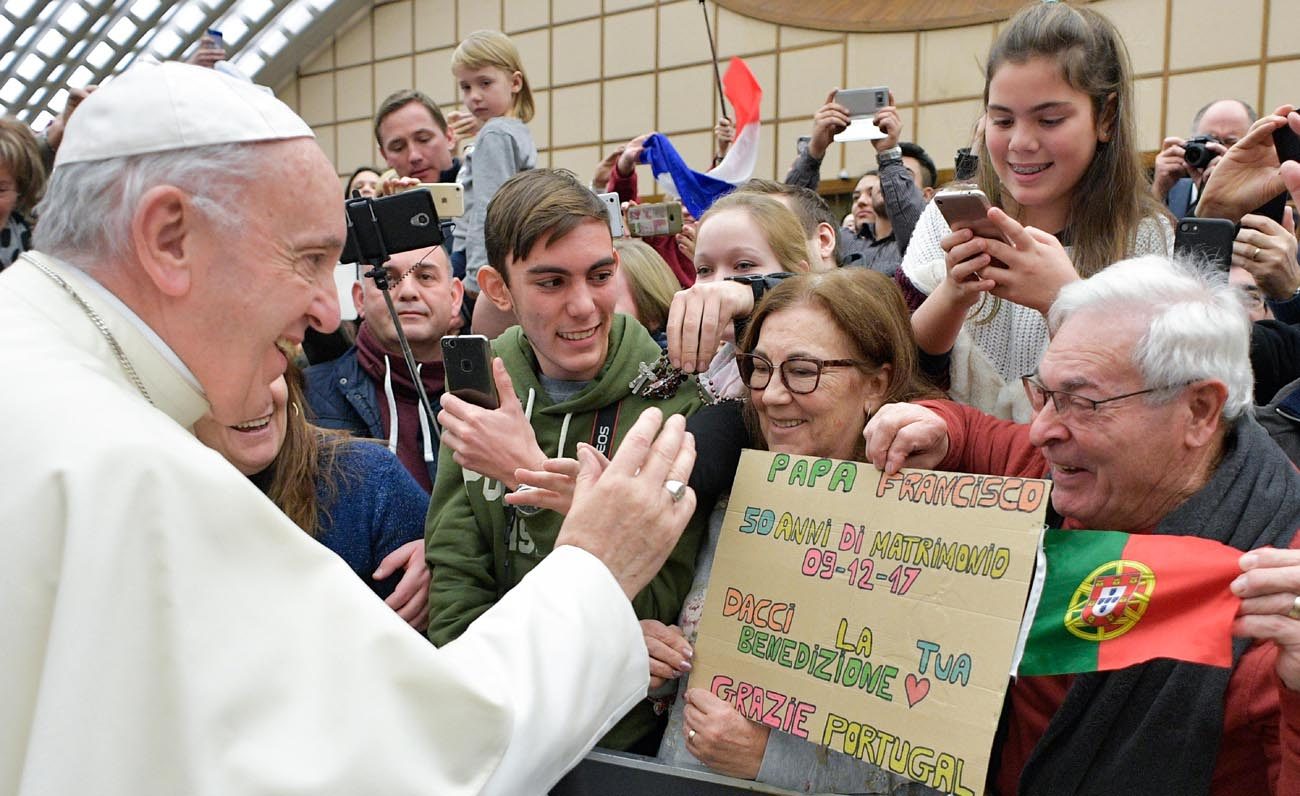 Before the start of his weekly general audience in the Paul VI hall at the Vatican Dec. 20, Pope Francis blesses a couple from Portugal who are holding up a handmade sign saying, "Give us your blessing," as they mark their 50th wedding anniversary in December. (CNS photo/L'Osservatore Romano)

The words and gestures that open the celebration help the faithful come together as one and prepare them to listen to the Word of God and celebrate the Eucharist worthily, he said Dec. 20 during his weekly general audience.

“It is not a good habit to be looking at the clock” and calculating how much of the beginning of Mass would be OK to miss and still fulfill one’s obligation, he said.

Get to Mass early — not late, he said, because it is during the introductory rites that “we begin to adore God as a community” and “to prepare the heart for this celebration with the community.”

The pope continued his series of audience talks on the Mass, reflecting on the introductory rites.

“Understanding these holy signs is necessary in order to fully experience the Mass and savor all of its beauty,” he said.

The gestures that accompany the Mass “risk going unnoticed,” he said, but they “are very significant because they express from the start that the Mass is an encounter of love with Christ,” who offers his body on the cross, becoming victim and priest.

After the entrance, the celebrant bows and kisses the altar as an expression of veneration because the altar is a symbol of Christ, the pope said.

Everyone gathers around the altar, “not to look at each other. No. But to look at Christ,” who is at the center of the community — not far away.

With the sign of the cross, the priest and assembly recognize the liturgy is carried out “in the name of the Father and the Son and the Holy Spirit.” It is a sign of the mystery of the Trinity, of Christ’s loving sacrifice and resurrection, and of each person’s baptism, he said.

Pope Francis again urged parents and grandparents to teach children from a very young age how to make the sign of the cross properly and what it means. He said so often it looks like kids are just gesturing “a picture of something” that is definitely not a cross. “Explain to them that they will have Jesus’ cross as protection,” he added.

The celebrant will then greet the assembly, for example, with “The Lord be with you,” and the assembly’s response, “And with your spirit,” shows the community of God in dialogue, he said.

“We are entering into a ‘symphony,'” he said, “in which different tones of voices resound, including moments of silence, with an aim of creating an ‘accord’ among all participants, that is, to see each other as animated by the one Spirit and for the same purpose.”

“One expresses in this way the common faith and the mutual desire to be with the Lord and to live in unity with the whole community,” he said.

The penitential act following the greeting invites all those gathered to recognize their sins and ask for forgiveness.

It is more than a moment of self-reflection, he said; it is “an invitation to admit that one is a sinner before God and before the community of brothers and sisters with humility and sincerity, like the publican at the temple.”

Since the Mass makes present Christ’s passage from death to life, the pope said, “the first thing we have to do is recognize our situations of death in order to be able to rise up with him toward a new life.”

At the beginning and end of the audience in the Vatican’s Paul VI hall, a small group of children from Poland sang Christmas carols. Circus performers from Cuba danced in colorful costumes as another performer juggled soccer balls. Musicians played Cuban music and sang “Happy birthday” to the pope, who turned 81 Dec. 17.

PREVIOUS: Open wide the doors, even ones without a wreath

NEXT: The Lord is speaking; here are 3 ways to listen to him