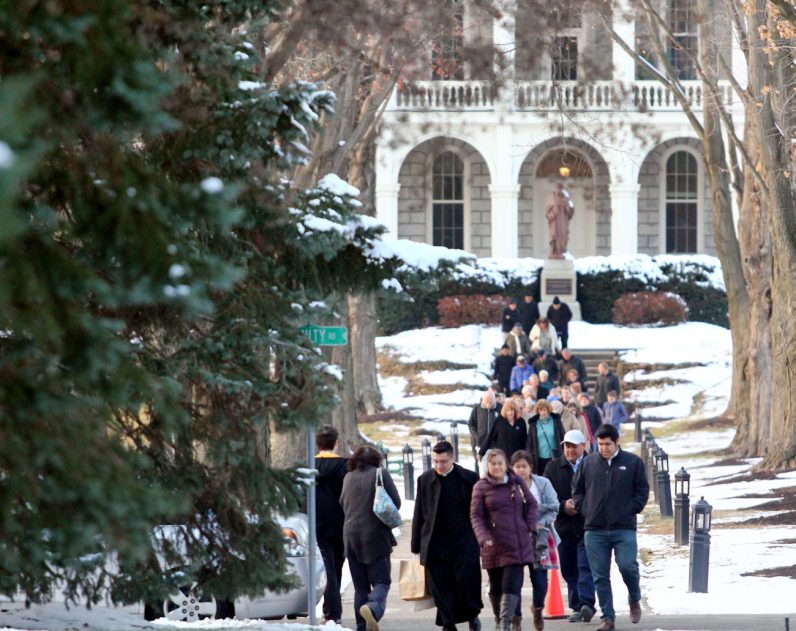 Snow sets a beautiful backdrop for the tourists’ walk from the seminary’s upper side campus to the lower side on Sunday, Dec. 10. (Sarah Webb)

It was a double event at St. Charles Borromeo Seminary in Overbrook on Sunday, Dec. 10.

First there were seminarian guided tours of the huge facility in the afternoon, beginning with the Upper Side, tracing back to 1871 and built under Archbishop James Wood. In recent years it has housed the Theology Division for post-college seminarians.

Tour highlights included the library, a very respectable art collection, a unique international collection of Christmas crèches and saintly relics from throughout the world and the very lovely Immaculate Conception Chapel.

Trudging across the campus, the visitors toured the cavernous Lower Side, built on a grand scale in the 1920s on the eve of the Great Depression by “God’s Bricklayer,” Cardinal Dennis Dougherty. This was primarily used for the education for the undergraduate college-level students and in the early years some upper high school seminarians.

A highlight of this tour was St. Martin of Tours Chapel, which in the evening would be the venue for the 30th annual Christmas Concert.

(See a photo feature with scenes from the day, here.)

Among the visitors were donors to the seminary, perhaps seeing firsthand the fruits of their gifts. Also there were relatives and friends of seminarians, folks coming primarily for the concert, young men who might be discerning a possible vocation to the priesthood, grade school kids and just plain Catholics.

“It’s beautiful,” said Christine O’Brien, a member of St. Madeleine Parish, Ridley Park. “I’ve never been here before and it has a beautiful history.”

Noticeable among the visitors were small groups of boy scouts with their leaders.

“It is part of our Ad Altare Dei program or Parvuli Dei Program for younger scouts,” explained Jack McLaughlin, an assistant scout master at St. Joseph Parish, Aston, who had four boys with him. “It is part of earning their award.”

Aidan Ryder, a member of Troop 219 in Wayne and in seventh grade at Radnor Middle School, was there as part of his Ad Altare Dei requirement.

“It’s a great experience, a way to deepen my faith,” he said. “I liked how passionate the seminarians are about what they are taught.” As to whether he might have a future in a seminary, he said, “I would think about it.”

Other visitors, a bit older, was also intrigued. “Charles,” who did not want to give his name or parish because he is not yet ready to go public with a possible religious vocation, said, “I thought this was very interesting, I’m looking at my options.”

Meanwhile, as the tours were going on, seminarians who would participate in the concert were busy with a final practice for the concert.

During a break, Chris Massaro, a choir member in pre-theology and a West Chester University grad, said, “It’s a little thing in a big picture. I enjoy it and it seems to be going well.”

His taste generally runs more to Billy Joel and Bruce Springsteen, but in this production, he especially likes “In Dulce Jubilo,” a medieval German-Latin Carol, which in a modern English rendition people know as “Good Christian Men Rejoice.”

Patrick Muka, who has been singing in the choir for eight years, is a transitional deacon at Our Lady of Perpetual Help Parish in Morton and he also likes “In Dulce Jubilo.”

“(Sometimes) I sing tenor, sometimes baritone, whatever they need,” he said. “I enjoy choir because my voice is an instrument of joy unto the Lord.”

Matthew Kuma, who is in second theology and studying for the Allentown Diocese, sang in his parish choir and at Kutztown University.  He favors another carol that was sung, “The Holly and the Ivy,” sung to a French melody.

The St. Charles Choir “does a good job,” he said. The members “have great spirit and bring a lot of talent to it.”

But a concert needs an audience. Kimberly Feeney, a young adult from Our Lady of Consolation Parish in Philadelphia who was in attendance with her mother and her twin sister, said they attended because they knew several of the seminarians.

“I don’t hear music like this very often,” she said. “It was exciting to hear this. Their presence is a reminder of the power of the Holy Spirit.”

While the singing was split between the Seminary Choir and the Theology Schola there were solos and duets featuring Brandon Artman and Kyle Adamczyk. And let’s not forget accompanist Bishop Timothy Senior, the seminary rector, who plays a mean piano.

“A lot of hard work goes into this and we always welcome visitors,” he said in remarks at the close of the concert. “We really appreciate your accepting the invitation to be here.”

Likening his seminarians to the apostles and disciples in the Gospel reading of the day, Bishop Senior said, “Our seminarians are like a shepherd. They come here because of a desire to be the good shepherd to bring comfort to the people.”

The point was well taken. A pleasant December concert certainly falls under the heading “comfort to the people.” 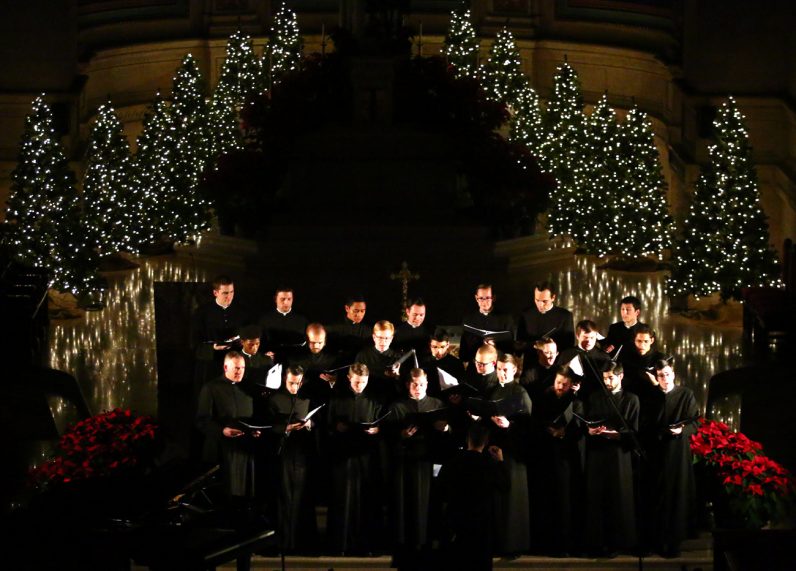 NEXT: Among new clergy assignments, one priest heading to Rome