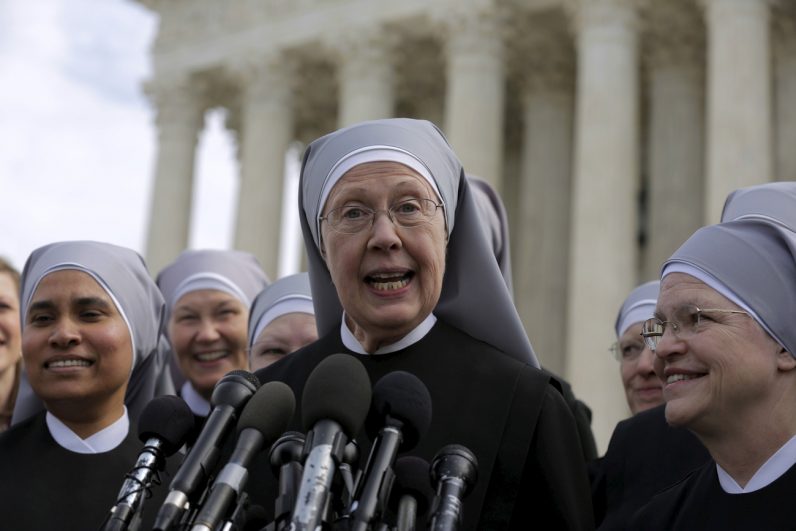 Sister Loraine Marie Maguire, mother provincial of the Denver-based Little Sisters of the Poor, speaks to the media outside the U.S. Supreme Court in Washington March 23, 2016 after attending oral arguments in the Zubik v. Burwell contraceptive mandate case. While the case appeared to have been resolved after an October 2017 directive by the Trump administration exempted religious employers including the Little Sisters, six states including Pennsylvania have brought a federal lawsuit challenging the rule. (CNS photo/Joshua Roberts, Reuters)

PHILADELPHIA (CNS) — The U.S. District Court in Philadelphia heard oral arguments Dec. 14 in a suit that aims to take away the exemption granted in October to the Little Sisters of the Poor and other religious employers allowing them to refuse to cover contraceptives for their employees on moral grounds.

A similar hearing took place Dec. 12 in U.S. District Court in Oakland, California. As arguments were heard inside, supporters of the religious order gathered outside of both courthouses.

The Little Sisters of the Poor have been in the spotlight for the past several years because of their moral objection to the Department of Health and Human Services requirement that most religious employers cover contraceptives, sterilization and abortion-inducing drugs in their employee health plan.

Days after the rule was issued, Pennsylvania and California filed complaints against the federal government over the exemption. Delaware, Maryland, New York and Virginia joined California’s lawsuit to become the first plaintiff group to file a motion for a preliminary injunction seeking to prevent the new exemption rule from going into effect.

The lawsuits claim that the exemptions to the Affordable Care Act’s contraceptive mandate pushes the cost burden to states.

In the California suit, Attorney General Xavier Becerra said the HHS ruling providing the religious exemption violates constitutional amendments because it allows employers to use religious beliefs to discriminate against employees and denies women their rights to equal protection under the law.

“After the Little Sisters’ four-year fight, a Supreme Court victory, and a new rule that protects women like them, (Pennsylvania) Attorney General (Josh) Shapiro still went to court to take away their rights,” said Lori Windham, senior counsel at Becket, said in a Dec. 14 statement.

“He then argued that the Little Sisters shouldn’t even be allowed to come to this court today to make their case,” she added.

Becket has argued all along that the government has many ways to provide services to women who want them as well as protect the Little Sisters. “Neither the federal government nor the state governments need nuns to help them give out contraceptives,” it said in a news release.

NEXT: At home for disabled youths, $10K helps them feel ‘like any other kid’