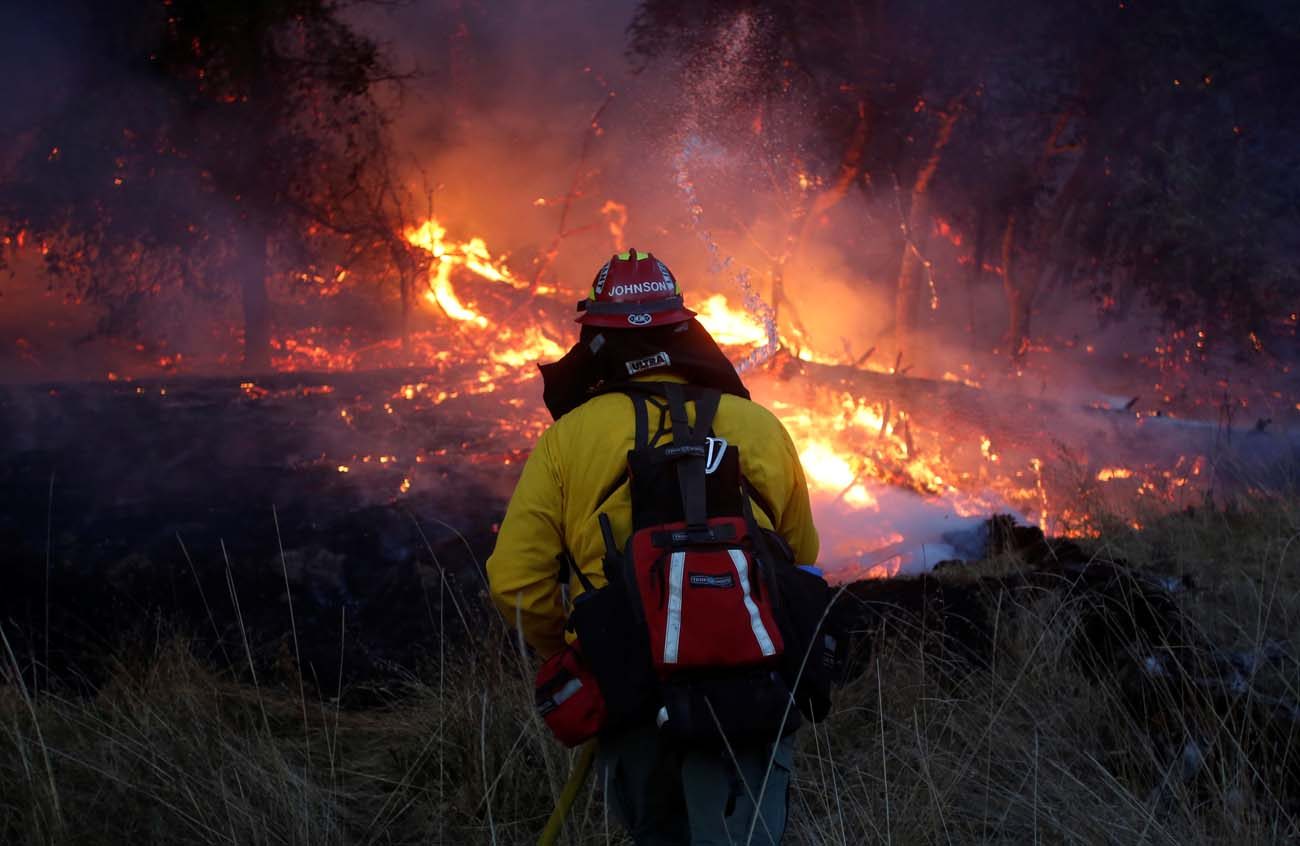 A firefighter battles a wildfire Oct. 14 near Santa Rosa, Calif. The 11,000 firefighters battling "one of the greatest tragedies" to strike California are starting to contain the massive blaze that has claimed the lives of more than 40 people. (CNS photo/Jim Urquhart, Reuters)

LOS ANGELES (CNS) — As wildfires raged near Los Angeles, Archbishop Jose H. Gomez called on those who have lost their homes and those offering assistance and fighting the flames to remember that God is accompanying them in their sorrow and acts of sacrifice.

“The Lord is there in the outpouring of donations and in all of the volunteers serving selflessly in our Catholic Charities and St. Vincent de Paul Society,” he wrote.

Archbishop Gomez called on people to hear God whispering in the wake of the fires, as recounted in the Book of Elijah: “After the fire there was a tiny whispering sound.”

“God is speaking in every moment, in every circumstance. But sometimes he speaks in a whisper. He asks us to listen, to have ears,” he wrote.

“What he is telling us in these situations is that life is precious, but it is also uncertain and fragile. We should live for God every day and cherish every minute and not take anyone or anything in our lives for granted.”

The fires continued to burn out of control, with the largest being the fast-moving Thomas fire in Ventura and Santa Barbara counties northwest of Los Angeles. Officials said the wind-whipped flames were about 30 percent contained late Dec. 13, but continued to rapidly advance toward the Pacific Coast.

The Thomas fire had burned more than 238,000 acres, claiming one life and destroying more than 900 homes since it began Dec. 4 near Thomas Aquinas College in Santa Paula. Smaller fires burned east and south of the city.

Archbishop Gomez commended the work of individuals who have reached out to the families and small business owners who lost their homes and possessions, escaping with little more than the clothes they were wearing.

People question the presence of God when natural disasters occur, he admitted.

“We always need to respect the pain of others; we have no idea what they are going through. And we need to remember: There is probably no greater challenge to faith than trying to keep believing in God’s love when it seems that he has left you and allowed you to suffer,” the archbishop wrote.

“The hard truth is that there are no easy answers. But that does not mean that the Lord is not in the fire. God is everywhere. Jesus said a sparrow does not fall from the sky in God’s creation without God knowing about it and caring about it.”

He concluded the column by offering prayers for suffering families that they would “hear the tiny whispering voice of God in these days after the fire.”

Forecasters expected to keep red flag warnings throughout Southern California through much of December as desert winds continued to sweep toward the ocean, keeping much-needed winter rains far at sea.

NEXT: Year in review: Counties seen as key to ongoing death penalty struggle