Catholic leaders offer prayers for all affected by train derailment 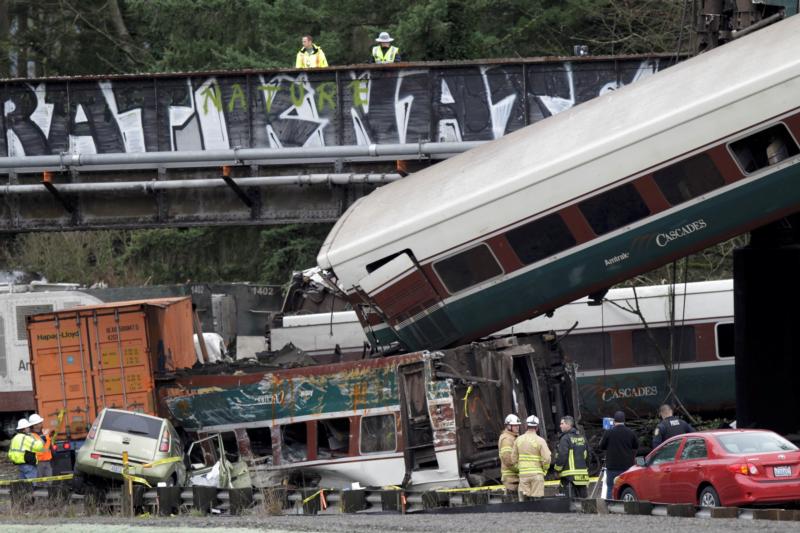 Rescue personnel and equipment are seen Dec. 19 after Amtrak train 501 derailed onto Interstate 5 in Dupont, Wash. At least three people were killed and dozens injured after the train derailed Dec. 18 while traveling on the first day of a new route outside Tacoma, careening off a bridge and onto a highway below. (CNS photo/Steve Dipaola, Reuters)

DUPONT, Wash. (CNS) — Catholic leaders in the Archdiocese of Seattle and the Archdiocese of Portland, Oregon, offered prayers for all affected by the Dec. 18 derailment of an Amtrak train that had just come from the Tacoma station and was headed to Portland.

“Our community of faith is praying for the victims and families of the train derailment as well as the first responders and emergency personnel on the scene,” said Greg Magnoni, spokesperson for the Seattle Archdiocese.

At about 7:40 a.m. local time, Amtrak Cascades Train 501, with 78 passengers and five crew members aboard, derailed off of an overpass in DuPont. A number of the train cars fell onto Interstate 5 below, crashing onto vehicles on the highway.

At least three people died. More than 70 people were taken to local hospitals. Ten were reported to have serious injuries.

“My prayers are offered for all the victims of the terrible train derailment south of Seattle. These things are always a tragedy, but this one hits very close to home,” Portland Archbishop Alexander K. Sample said in a tweet.

The night of the tragic accident the National Transportation Safety Board announced that the Amtrak train was going 80 mph in a 30-mph zone for that portion of the track. It derailed along a curve and a total of 13 train cars jumped the tracks. The derailed cars were removed the morning of Dec. 19, news reports said.

One of the dead was identified as Zack Willhoite, who was an employee of Pierce Transit. The transit authority provides public transportation in Pierce County, which includes Tacoma and DuPont. The other two people who died had not yet been identified as of mid-day Dec. 19.

NTSB officials continued to investigate the cause of the accident, which took place on the first day of a new route for Amtrak. News reports said the tracks had been upgraded to allow higher-speed trains, but the curve where the train derailed was a 30-mph zone.

PREVIOUS: For ‘Dreamers,’ U.S. is the only home they know