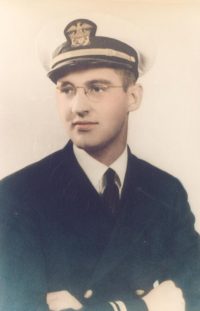 DUBUQUE, Iowa (CNS) — Relatives of the first chaplain to die in World War II accepted the Silver Star on his behalf 76 years to the day after he died saving 12 sailors during the Pearl Harbor attack.

On Dec. 7, Del and Dan Schmitt, and Fran Hemesath — nephews and a niece of Father Aloysius Schmitt — were among the family members who participated in a memorial Mass and medal ceremony at Loras College in Dubuque.

They still remember time they spent with their uncle as children before anybody ever called him a hero.

“He would be very humble,” reflected Del Schmitt on how the priest would react to the recognition. “He would probably tell them to give the medal to someone else.”

Rear Adm. Margaret Kibben, chief of chaplains of the U.S. Navy, led the military delegation bestowing the award, the third-highest medal in the armed forces, given for bravery in combat.

“It was his actions that helped to save 12 souls,” said the admiral during the ceremony. “Father Schmitt has lived out the motto of the U.S. Navy Chaplain Corps … ‘called to serve.'”

She also took a moment during her remarks to thank all those who died for their country at Pearl Harbor, “their actions unrecorded.”

Father Schmitt, a native of St. Lucas and a 1932 graduate of Loras College, was ordained for the Archdiocese of Dubuque before joining the Navy. The 32-year-old lieutenant was killed aboard the battleship USS Oklahoma during the Japanese attack on Pearl Harbor Dec. 7, 1941.

The priest had just finished saying Mass at about 7:48 a.m. when his ship was struck by torpedoes and began to sink. Father Schmitt sacrificed his own chance to escape and helped save the lives of a dozen men by pushing them through a porthole to safety.

“Father Al was an inspiration to our family; let him now be an inspiration to you to do great things with the rest of your lives,” Dr. Steve Sloan, another of the chaplain’s relatives, told the crowd who gathered for the medal ceremony. Sloan helped lead the effort to upgrade the priest’s military awards, a process that took several years.

For his heroism, Father Schmitt was initially awarded the Navy and Marine Corps Medal and the Purple Heart. His family and others compiled evidence and eventually submitted a 29-page document to military authorities making the case for an upgrade.

“Members of this family for the last several years have been trying to upgrade his award and have gathered quite a bit of firsthand information from people who were there on the ship,” Kibben explained in an interview before the ceremony.

“(They identified) the fact that he really did deserve a much higher award from our country, and just recently the secretary of the Navy approved it,” she told The Witness, newspaper of the Archdiocese of Dubuque.

The military has stringent requirements that must be met before someone can be awarded any of the top combat medals. Kibben touched briefly on how authorities determined Father Schmitt should receive the Silver Star.

“One has to be in the thick of combat and one has to display actions related to heroism,” she said. “The heroism is clearly identified by his own personal sacrifice, which is evident in the actions that he took.”

Sloan publicly thanked a group of people he identified as “The Father Al Team” who were key to the effort and recognized many others, including Republican Sen. Joni Ernst of Iowa and Father Daniel Mode, a priest of the Diocese of Arlington, Virginia, who is director of plans and operations for the Office of the Chief of Chaplains of the Navy.

Before the medal ceremony, a Mass was held at Christ the King Chapel at the college. Father Schmitt was laid to rest at Loras College in October 2016.

His remains had been identified following efforts by the U.S. Department of Defense to use modern DNA testing to identify members of the USS Oklahoma’s crew who had been buried as “unknowns” at the National Memorial Cemetery of the Pacific in Hawaii. The chaplain’s remains are now entombed near the main altar in the chapel.

Father Mode concelebrated the Dec. 7 Mass with three priests of the archdiocese. He said Father Schmitt “truly was a witness and example of Christ.” Father Schmitt’s chalice, recovered from the shipwreck, was used for the liturgy.

“Father Al Schmitt does not need our honor, but we need to honor him,” Father Bill Joensen, dean of spiritual life at Loras, said in his homily. “We need his example and witness to illuminate our own darkness.”

Father Schmitt’s love for God and country continues to have an impact today. Nick Radloff, a seminarian for the Archdiocese of Dubuque, was inspired to investigate the priesthood after learning about Father Schmitt while serving in the Air force. He was among those who spoke at the medal ceremony.

The chaplain’s legacy “lives on through us, so it is my prayer that we all tell that story well,” he said.