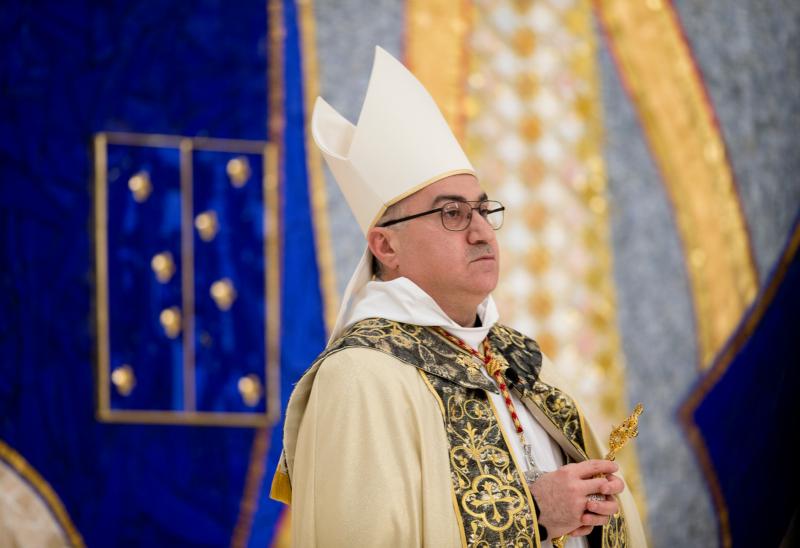 WASHINGTON (CNS) — Chaldean Catholic Archbishop Bashar Warda of Irbil, Iraq, reported that he and U.S. Vice President Mike Pence “had a substantial discussion on the needs of the Christians, and other religious minority communities, in Iraq.”

The archbishop met with Pence Dec. 4. The visit came during an extended visit the prelate made to the United States. Part of his trip included several events during and after the Week of Awareness for Persecuted Christians Nov. 26-Dec. 2.

Pence is to visit the Middle East in late December. He has said his discussions there will focus on protecting religious minorities, especially Christians, the continued threat imposed by the Islamic State and the Arab-Israeli conflict.

Archbishop Warda said he updated Pence “on the situation facing our people and expressed our hope that peace would soon come to Ninevah.

“On behalf of our people, I expressed our gratitude for his promise of swift assistance to our communities who suffered genocide at the hands of ISIS,” the archbishop said. Catholic News Service received an email with his remarks from the Knights of Columbus.

“I noted the importance of having the U.S. and U.N. work with the three major Christian groups together through the Ninevah Reconstruction Committee, and the importance of this group in the resettlement of thousands of Christians in Ninevah and in furthering the unity of the Christian communities in Iraq,” Archbishop Warda said.

The prelate also said he described to the vice president “the importance of the aid and support we have received” from the Knights of Columbus and Aid to the Church in Need.

At the end of their meeting, Archbishop Warda gave Pence a crucifix from the town of Karamles, which was targeted and badly damaged when IS invaded. “I also assured him of our prayers and told him that if he ever visits Iraq, he is most welcome in Irbil,” he added.

In a tweet, Pence said he had “an important dialogue” with Archbishop Warda about president Donald Trump’s “commitment to directly assist persecuted Christians and religious minorities in Iraq. I’m heading to the Middle East this month to discuss U.S. plans to accelerate funding those impacted in the region.”

The Knights recently completed fundraising for a $2 million initiative to rebuild Karamles, a predominately Christian town in Ninevah.

On Oct. 25 in a keynote address at the Solidarity Dinner for the Washington-based group In Defense of Christians, Pence announced the Trump administration would provide direct U.S. aid to persecuted Christians in the Middle East and route it through the U.S. Agency for International Development.

The aid will go to “faith-based and private organizations” to help those who are persecuted in the region, Pence said.